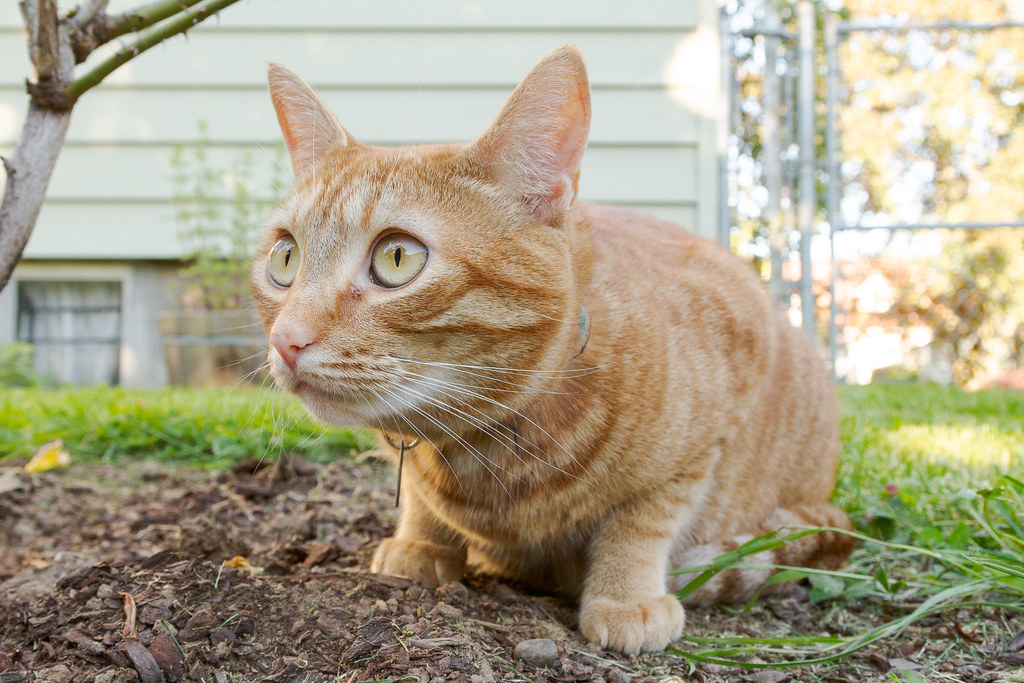 One of the previous owners of the house must have really loved this one type of bulb because they are literally planted everywhere around the house. Unfortunately that includes some places where they shouldn’t be, such as in and around my favorite rose bush (which is actually a few rose bushes planted together). While the bulbs do have a pretty flower, they also are so thick they keep the roses from drying out, leaving them susceptible to the black spot fungus which has plagued our roses.

So earlier this summer I dug out as many of the bulbs as I could from underneath these roses. I tried to avoid damaging the roses but it was slow going as many of the bulbs were up tight against their roots. Also because the thorns of these old roses are both large and malevolent. The going got even slower when Sam came over to help. The stalks were still attached to many of the bulbs, as I pulled a few of them up he started playing with them. So we turned it into a game, I’d drag the stalks through the grass and he’d try to catch them and knock the seed pods off. When the stalk was sufficiently flayed, I’d toss it up and he’d somersault through the air after it.

Eventually I dug up as many bulbs as I could and all of Sam’s organic cat toys were gone. I took this picture of him after our fun and games were over.

A bird in the hand is worth two in the bush.
English proverb

A bird book in the hand is worth two in the house.
Boolish proverb

When I’m about to make a big purchase, I make an equally big spreadsheet comparing the pluses and minuses of each option. Computers, cameras, lenses, cars, houses, doesn’t matter, there’s always a spreadsheet. Until now. Until the iPhone.

Even without firing up Excel (or lately, Numbers) to map out the alternatives, I knew the iPhone 4 was the one to finally replace my ancient and little-loved Sony. I’ve been playing with it for a few weeks now and I have to say the little thing really tickles my fancy.

It probably won’t surprise you to learn that the first three apps I’ve purchased are all related to birds.

When I ordered the phone, I knew there were birding apps for it but I didn’t know which ones. So I did a little happy dance when my wife informed me that the Sibley guide was available for the iPhone. The Sibley guide is my favorite of my four printed field guides because of the breadth and depth of the illustrations, but it’s also the largest and heaviest so not the one I carry into the field.

Sibley has the answer

On our recent trip to Maine, I brought my second favorite guide, Kenn Kaufman’s excellent guide. But it was left behind in the hotel room when we went out to visit a relative, who it turns out had hairy woodpeckers coming to her feeders. There was a male and female and another similar bird, but with an orange patch on top instead of a red cap in back. Was this a juvenile hairy or another species altogether?

We consulted a bird guide at the house but it didn’t provide any clues. Even my book back at the hotel didn’t provide the answer. It wasn’t until I got back home that the Sibley guide showed not only the location of the juvenile’s patch but also the clue about the color.

With the iPhone app we would have known the answer straight away. And to top it off, the guide includes a lot of audio files so I can better learn to bird by ear. I was convinced of the need to improve in this area while taking a guided tour offered by the Audubon Society in Maine, I was stunned at how readily the leader could pick out birds by song.

When I’m at home, I’ll still prefer the printed guide, but I’m terribly excited now that I can carry hundreds of birds in my pocket.

Next up was Angry Birds, a game where you use a slingshot to toss birds at the creatures that stole their eggs. It’s a delightful little game but would be even more fun if you used a black lab to toss hedgehogs at the creatures who stole her food. Just a suggestion.

The next app not only has birds like eagles and falcons and cardinals, but other wildlife like bears and panthers and rams. I still have a big learning curve but I’m looking forward to playing Madden NFL 2011 as I start riding the train again.