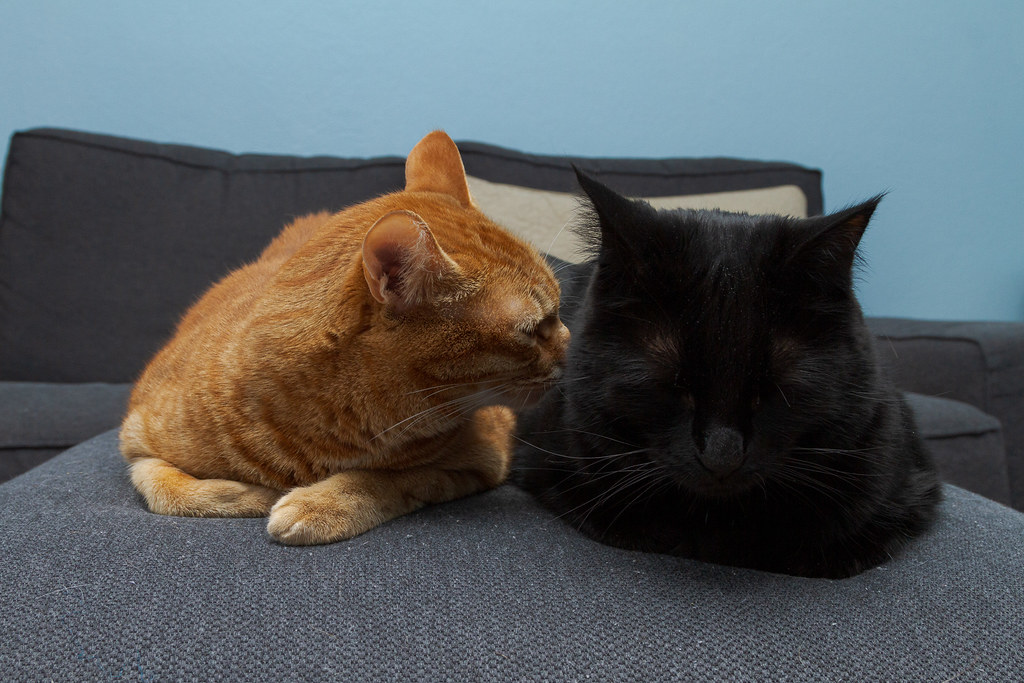 I think she just wants to sleep, Samwise.

I’ve been reworking a lot of old images since Scout died. It’s a bit like having a time machine, going back and editing old pictures, and I’ve also used the occasion to test out a variety of raw converters. A surprise favorite is one I didn’t even know existed until recently, PictureCode’s Photo Ninja. No converter does everything well and this is no exception but I liked it well enough after working through just a few images that I bought it straight away.

This is the first picture I took of Sam, taken the day we adopted him in 2007. You can see from his body language he’s still a little apprehensive about the sudden change in his life, but it didn’t take him long to feel right at home.

I always knew Scout’s death would be particularly hard for me but I didn’t expect it to be this hard. It’s been four months since she died but the road to recovery has been a slower walk than I expected. It hasn’t helped that work got unexpectedly stressful and hectic during those months, leaving me so worn out that I was often falling asleep after dinner. Rather embarrassing for a night owl like me.

They say you shouldn’t make any major changes in the wake of the loss of a loved one, and though I suppose the advice usually applies to the death of a spouse I’ve applied it here as well, for there have been a number of times the past few months I’ve felt like abandoning wildlife photography. I suppose that’s partly a reaction to the amount of time it takes to photograph the way I like and partly to the new telephotos being priced far out of my range.

It is true I haven’t been up to Ridgefield since January, partly because I haven’t felt like going, but partly because I’ve been too tired to get up at the early hours I like to visit the refuge. And I guess I did put my camera aside entirely for a few months until I started taking pictures of the pets again these past few weeks, but at least I did use my time away from Ridgefield to start expanding out the wildflower garden I started a few years ago. I’m slowly making the backyard more bird friendly, as I’ve been experimenting with shooting birds from my office window. And this fall when the birds migrate back, I’ll join them at Ridgefield.

Unfortunately I didn’t get much done on the computer since our cat Sam, who had been close to Scout and struggled too after her death, was constantly snuggled up on my lap where my computer normally resides. But coincident with the warming weather and opening of windows he has ventured further afield, so I’m making my return to blogging and hope to get caught up on email.

This picture of Scout is from January of 2007 as she sat in her heated bed in my office. Templeton was still alive then but would die at the end of the year, shortly before we adopted our cats Sam and Emma, a year before our dog Ellie. Life marches on and someday soon I’ll be able to look at pictures of Scout with all smiles and no tears, just as I can with Templeton.

I’m just not quite there yet.