For a month in early 2011, I often saw this adult great blue heron hunting for small fish in the same location at Ridgefield National Wildlife Refuge. I looked for it every time I drove the auto tour, as the duckweed in the slough was turning red instead of green, providing a pink backdrop in the soft overcast light rather than the more common greens and browns and blues. 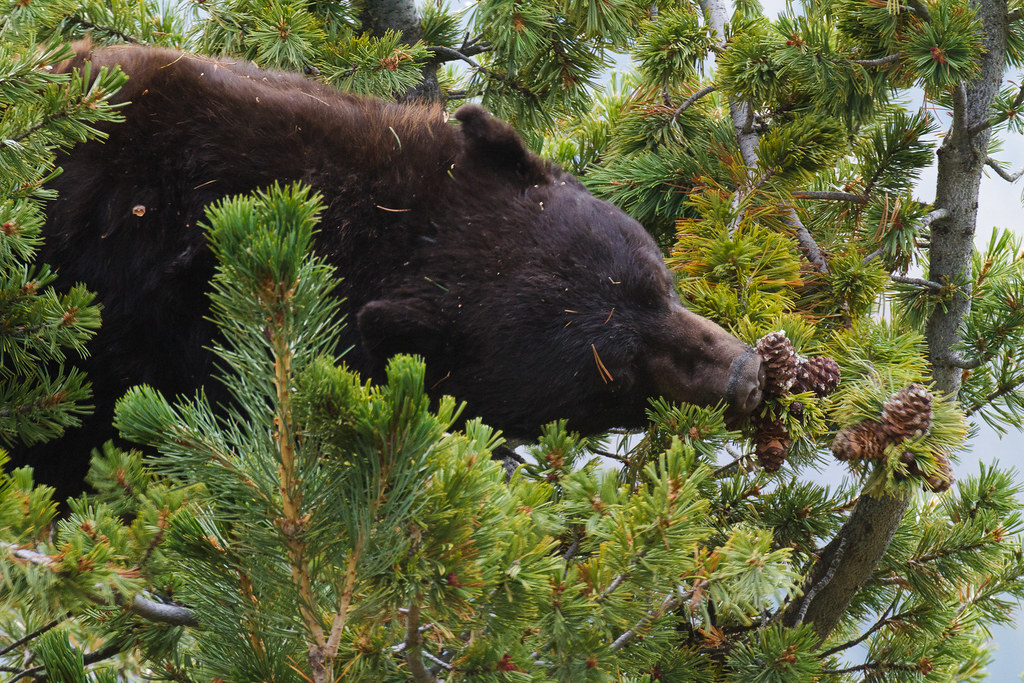 A tree swallow takes a brief respite from hunting insects over Long Lake. 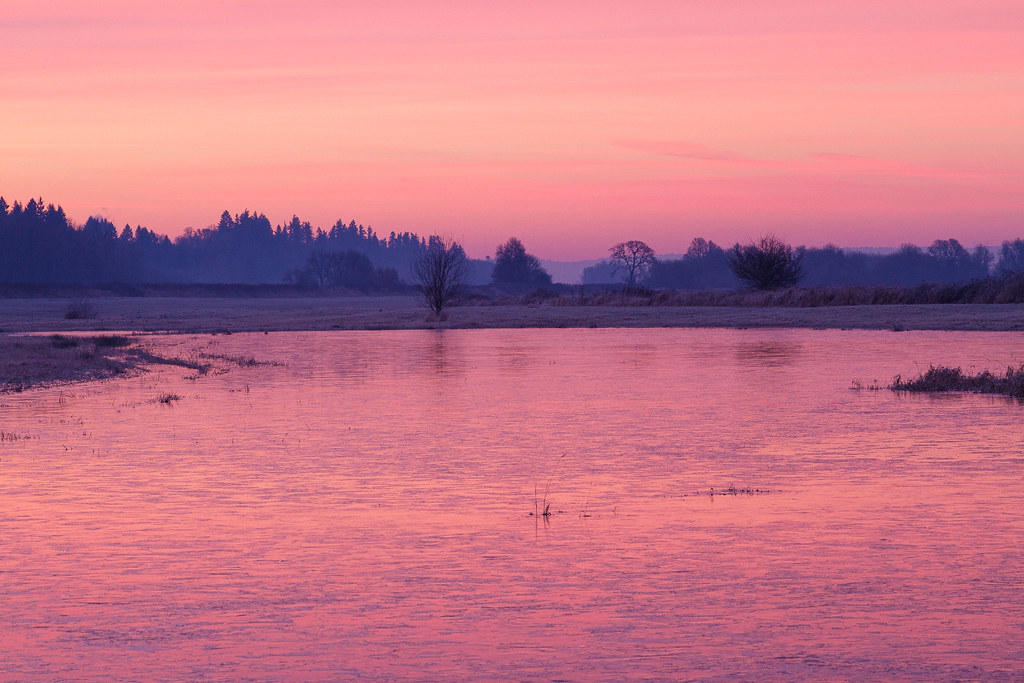 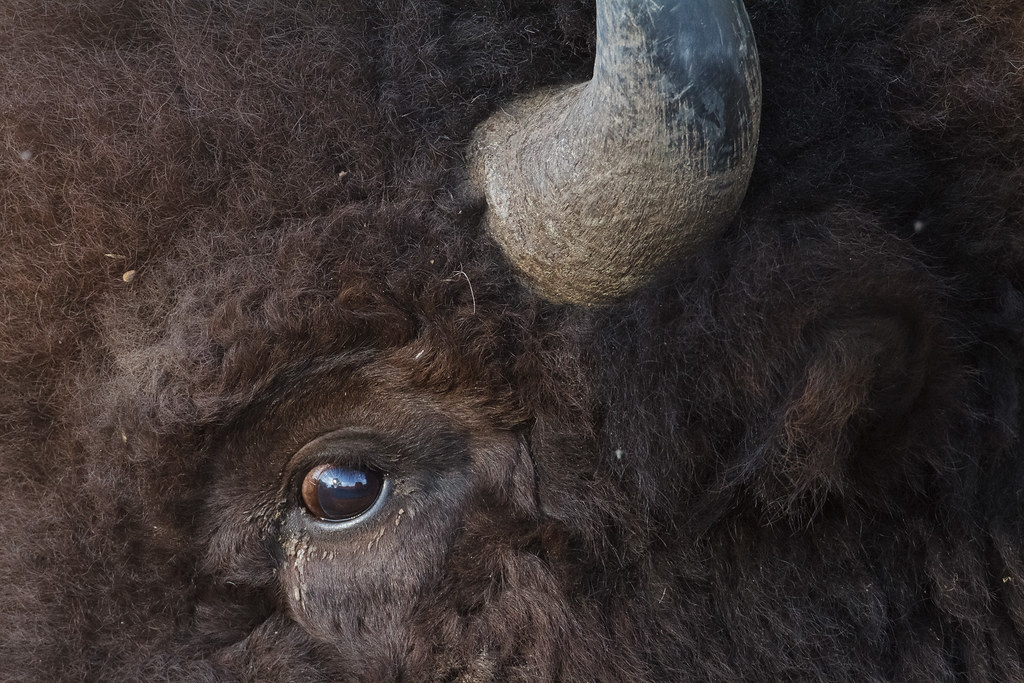 After falling in love in Yellowstone with the colors and patterns of Mammoth Hot Springs, later the moss of the rain forests of the Olympics, then the bark of the ancient redwoods of California, I finally merged my love of small details in a larger landscape with another and greater love, the wildlife I had been shooting for years.

I dreamt of taking this picture for many months before my trip to the Tetons and Yellowstone, thinking I might get a shot at it in Yellowstone, but instead I found a bison herd near the road on my last morning in the Tetons and was able to photograph from the safety of the car. Afterwards I was so nervous I could barely bring myself to review the pictures on the camera to see if I had gotten the picture I so hoped for. When I came to this picture of one of the bulls, I stopped worrying and left for Yellowstone full of joy.

When I was in graduate school and just getting into wildlife photography, I spotted a pair of unfamiliar ducks at the Virginia Tech Duck Pond. They only stayed for a day or two before migrating on, but I was a bit puzzled as to their identification as they didn’t quite match anything in my guide book. I guessed (rightly so) that they were northern shovelers as nothing else in the book had a bill quite like theirs. I later learned that they were in non-breeding plumage, while my guide book only had their breeding plumage.

When we moved to Oregon I was delighted to find shovelers here in the winter, so now I get to see them on a regular basis, and am still amused by the variety of plumages I see within the same group of shovelers. This male for example, even though it was late winter, still has signs of his intermediate plumage. With that bill, though, there’s no mistaking him for anything but a shoveler.

As time passes more and more of the dead trees at Ridgefield succumb to the slough. Upon returning to the refuge after a long absence, I noticed this tree in South Big Lake had finally fallen. It was too far from the road to ever be a favorite of mine but I did shoot it occasionally, such as this portrait of a kingfisher on one of its branches from a few years ago, set against the overcast sky. 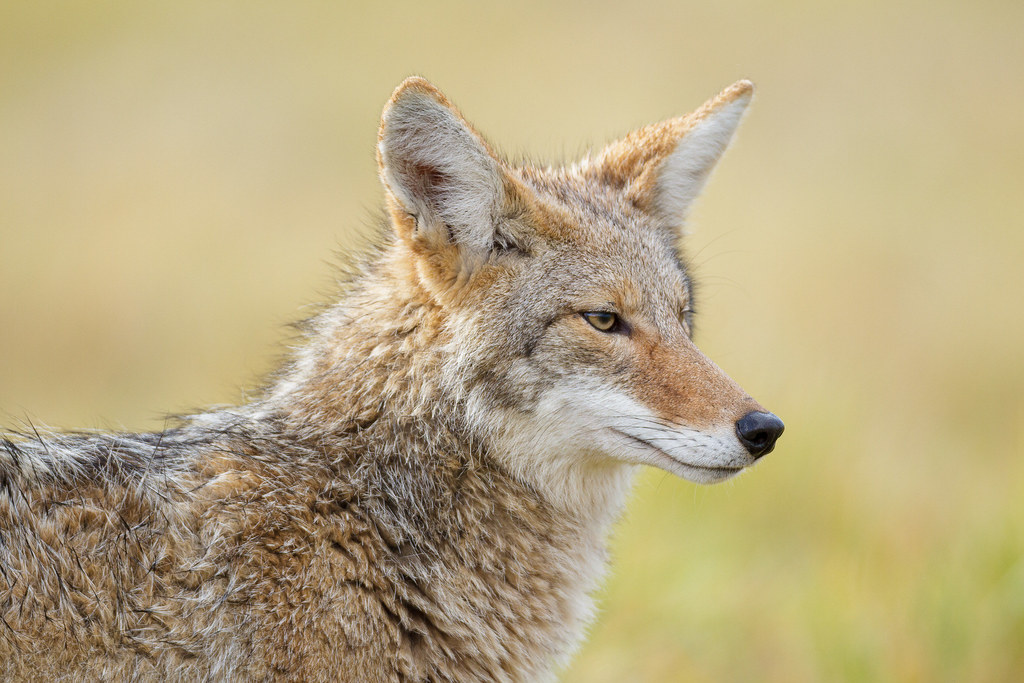 I headed up to Ridgefield National Wildlife Refuge yesterday for the first time in nearly a year, wondering what changes I might see, but the most unexpected change was one I saw in my rear view mirror. I had stopped along Rest Lake to photograph a couple of bitterns that were hunting near the road, but I kept having to move up to let traffic behind me through, before backing up to resume my watch.

The bitterns were soon gone but a great blue heron was slowly working its way in my direction, so I settled in to see how close it would come. I frequently checked my rear view mirror to watch for approaching cars but none came. But then in the mirror there was a slow movement of brown from one side of the road to the other, and when I swiveled my head around to look got my first glimpse of a Columbian white-tailed deer. Two of them actually, a doe and her fawn.

The doe had bright yellow tags in each ear and a large radio collar around each neck, she was one of thirty-seven that were emergency translocated earlier this year from another refuge in Washington (and one of twenty-nine that survived). Her fawn, though, belongs to the first generation born at Ridgefield. It and the other deer will be closely watched to see how they survive in their new home, as the Columbian whitetail was only recently downlisted from endangered to threatened status.

But at the moment, it was just the two of us watching each other, each seemingly as surprised as the other by the encounter.

Tundra swans usually don’t come close to the road at Ridgefield so I was particularly pleased late on a winter’s day to find an accommodating swan. But as I was photographing it, someone else came up and parked behind me and committed the cardinal sin of the auto tour — he opened his car door and got out. Of course the swan spooked and I drove away in frustration and was going to head home, but instead calmed myself and started looking for other things to shoot. The meadow at the end of the auto tour was empty, no herons or hawks or coyotes, so I thought I was done for the day.

But this great egret was waiting for me just past the parking lot and let me photograph it until it was time to head home.