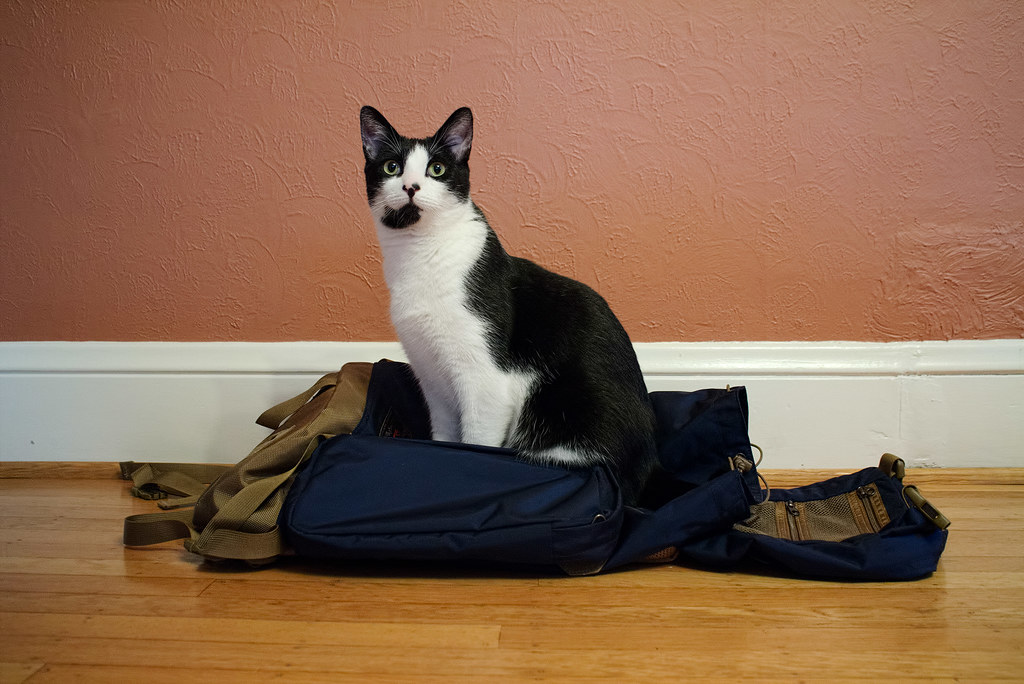 Boo inspects my new backpack. Fortunately Emma, who had snuck into the main compartment, fled before Boo sat on it.

If you’ve mastered the art of solo dog bed stealing, why not double your fun? In this class Professor Boo will teach you how to snuggle, spoon, and stick your feet in your best friend’s face! 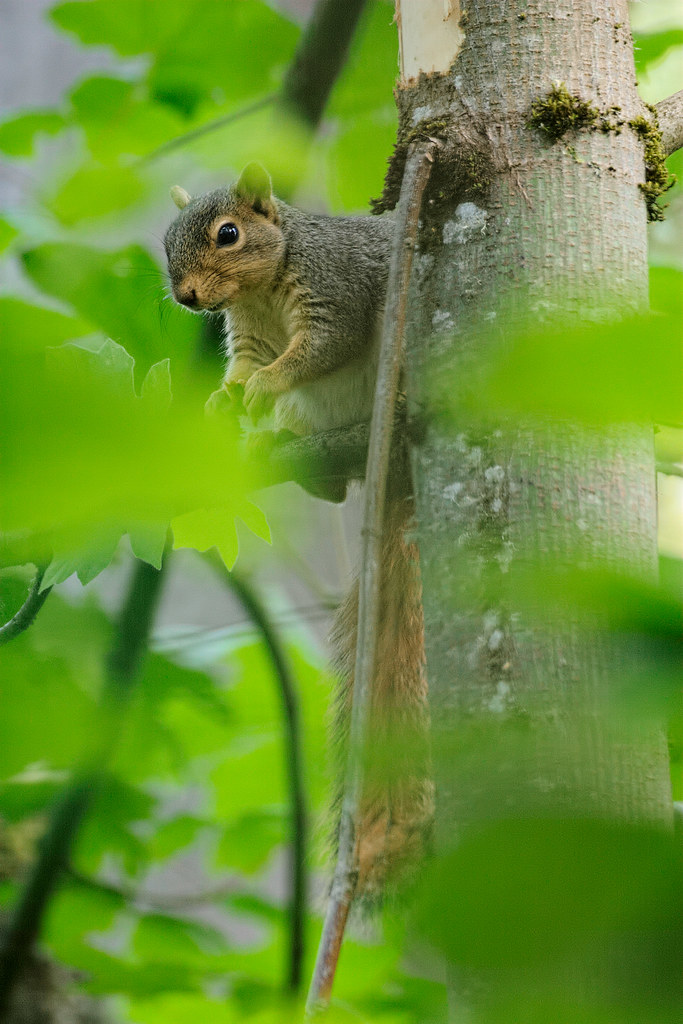 The squirrels in my Portland neighborhood are all invaders from the east, either gray or fox squirrels. This eastern fox squirrel was nearly obscured by leaves in a nature park in nearby Beaverton, where the large habitat also supports one of our native squirrels, the Douglas’ squirrel. 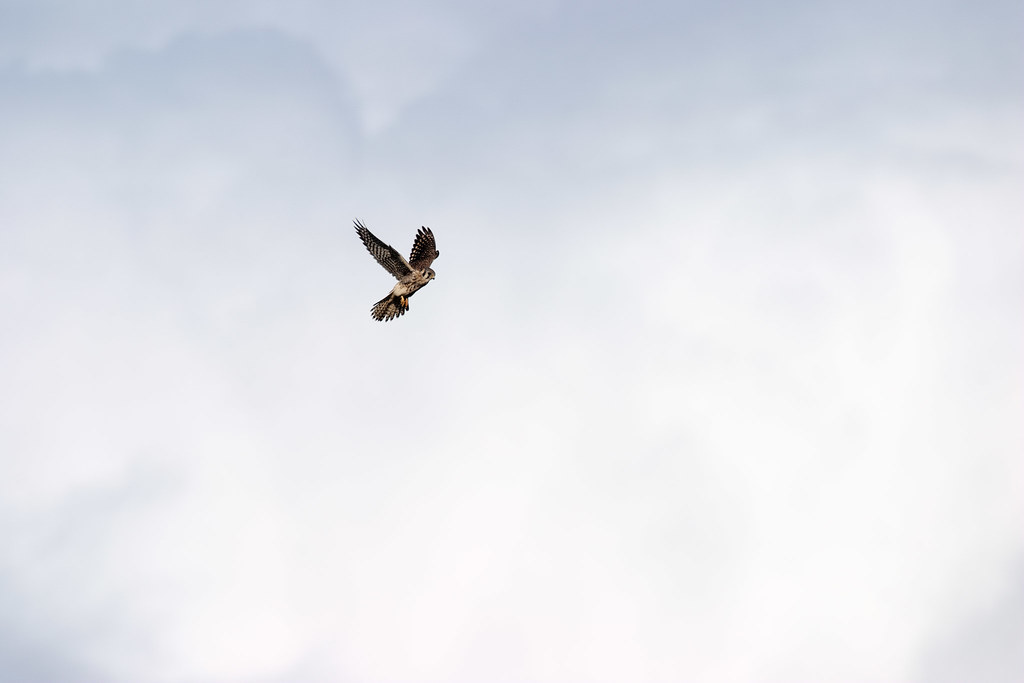 Quite a different kestrel picture compared to the previous one I posted, this distant portrait shows a kestrel at work, hovering in place watching for small rodents moving about in the meadow below.

I started this blog in January of 2006, self-hosting it at my old site, but when I closed that site late last year I moved the blog’s hosting to WordPress. However since my pictures went away when I shut down my site, most of the posts now had missing images. Rather than have a blog full of missing links and images, and rather than delete them, I set those posts to be private.

I’ve been testing out hosting images at Flickr over the past year, so when I upload a picture related to an old blog post, I update the post and set it to public. I’m not sure how WordPress deals with this for those who have subscribed to the blog, but I suspect it sends out notices just as if it was a new post, even though it was written years ago. The original date is shown correctly so if I’m talking about Templeton and Scout as though they were still alive, check the date of the post.

Currently there are 225 public posts but still 1133 private posts waiting for their associated pictures to be uploaded so they can be set to public. If you’re not subscribed and just visiting the blog but want to see any pictures I upload, your best bet is to visit my account at Flickr. 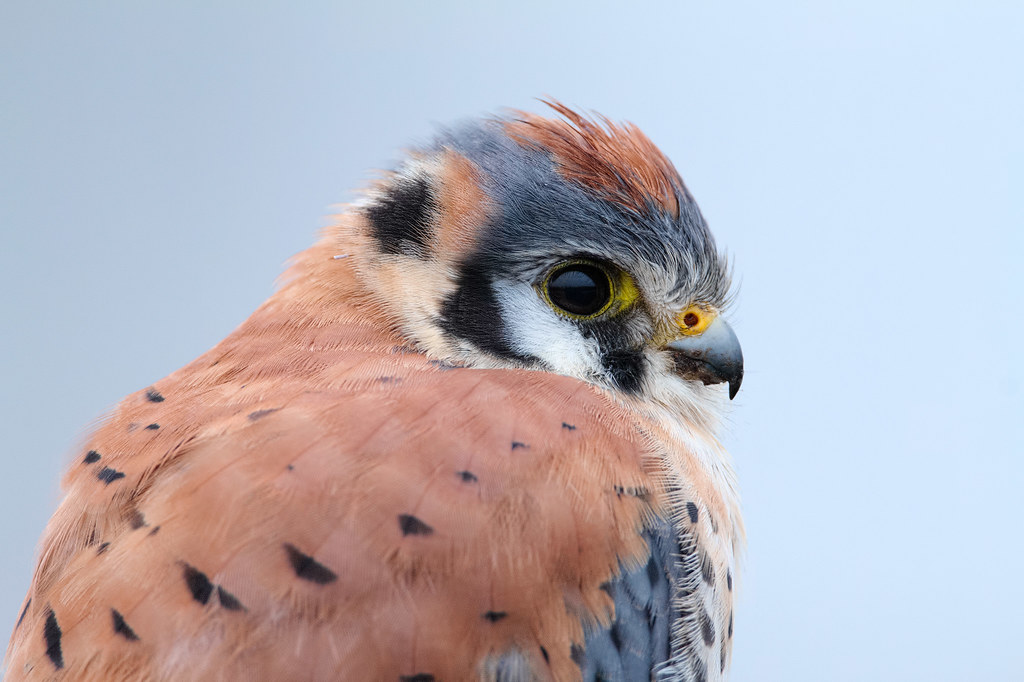 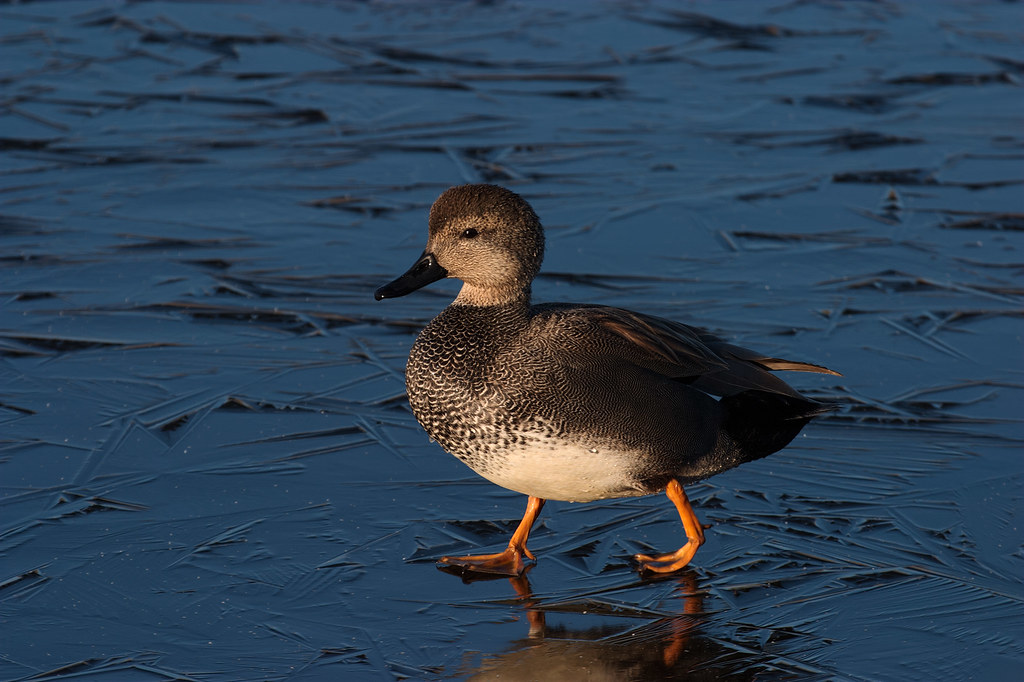 A gadwall drake walks across the ice late on a winter afternoon. 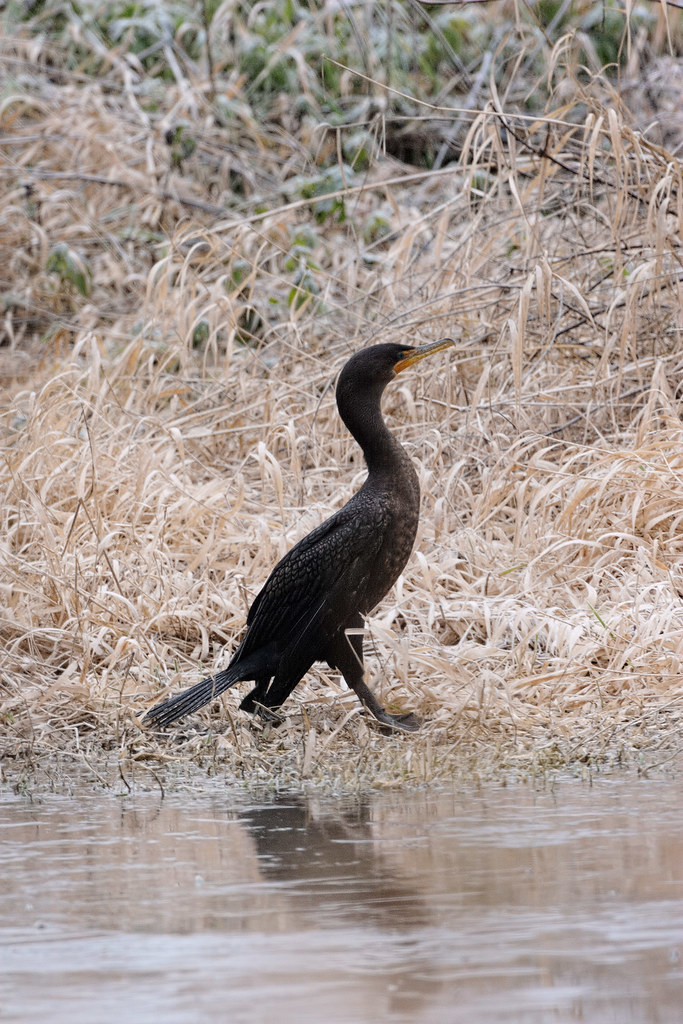 I wasn’t sure what I was seeing when I first spotted a dark form walking along the opposite shore on a cold winter morning. It took me a moment to recognize it as a double-crested cormorant as while it’s a bird I’ve seen many times, it’s always been flying or swimming, not walking. I wonder if it was as confused as I was, as we had a rare day cold enough to freeze the water of the slough, icing over its favorite fishing hole. 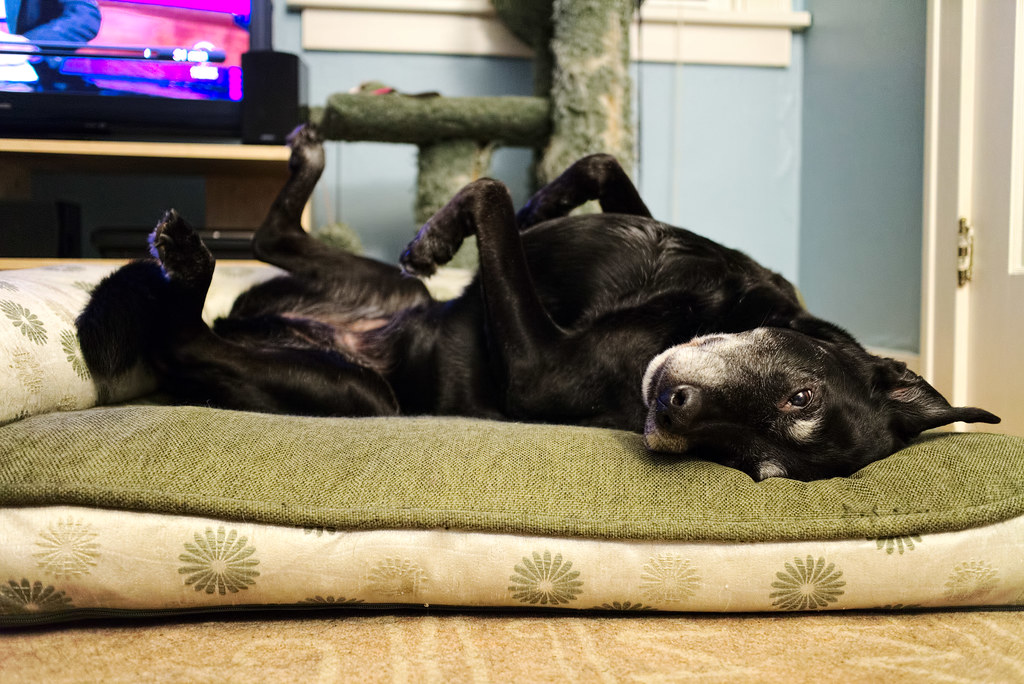 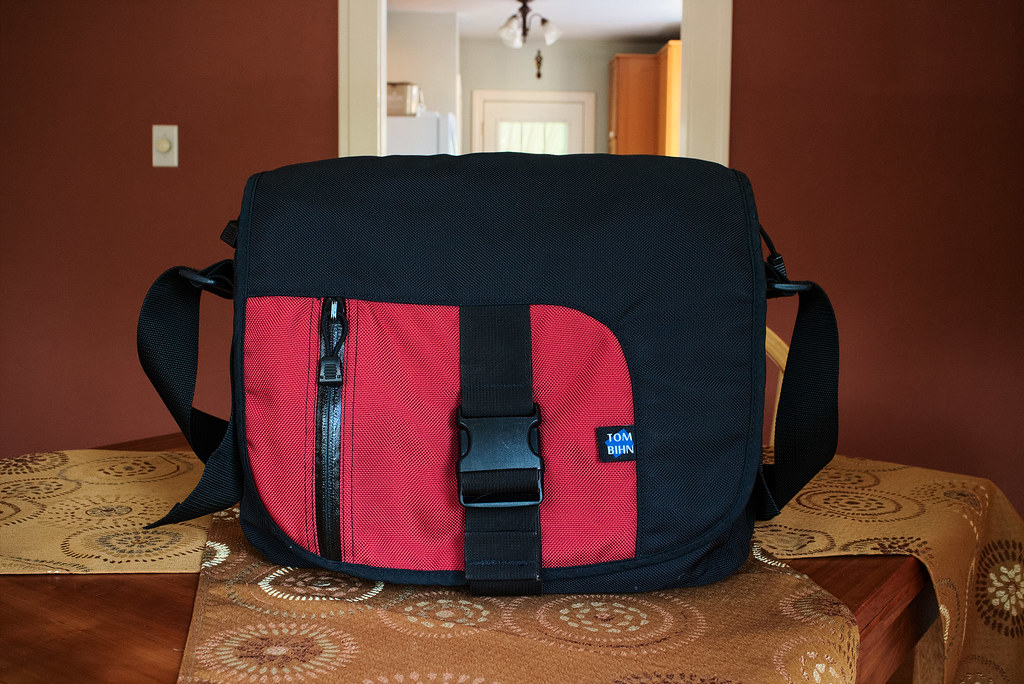 Is there much point to reviewing an 11-year old bag, especially one that has been updated and improved since I bought it? Perhaps not, but this is as much a love letter to the company that made it — Tom Bihn — as it is a review of my ID messenger bag. After being exposed to cheap laptop bags from local stores and the Willy Loman bags that are the bane of the corporate world, the ID was a revelation.

We moved to Portland in 2002 from further south in Oregon and I traded a long car commute for walking and a ride on the light rail. To be more productive on the train, I bought my first laptop, a 12″ iBook, and carried it in a laptop backpack we picked up from an office supply store. I was shocked at how quickly the backpack fell apart. So when I upgraded to a 12″ Powerbook in November of 2003, I decided to get a better bag as well. I wanted to try a messenger bag for the crowded train as I had been witness (and victim) too many times to the horrors of inadvertent backpack whackage from one rider to another.

I didn’t want a heavy bag since all of the weight would be on one shoulder, but it needed to be big enough to store a fleece and a raincoat for the variable spring and fall weather. My search led me to the Tom Bihn ID. At the time I was a bit nervous at the cost, $85 for the ID itself and $50 for the Brain Cell laptop case that attaches inside it, as it was more than I had ever spent on a bag (today the ID sells for $160, the Brain Cell $65). But it seemed like a great bag from a great company so I ordered the ID in Black/Crimson/Steel, hoping it would last me a few years.

A few years turned into eleven. 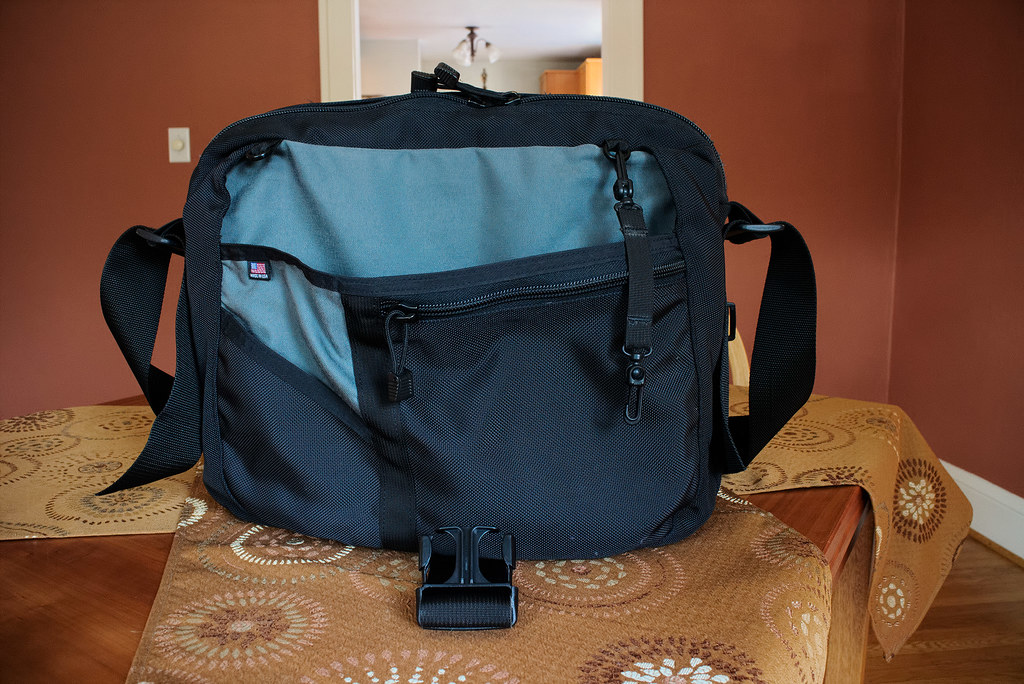 While I’ve been driving to work the past few years, most of my time with the bag has been spent walking or on the train. It’s about a 20 minute walk home from the train station and, living in Portland, I’ve been rained on countless times, from light drizzles to out-and-out downpours. Snowed on a few times. One day I even trudged home in a freezing rain, finally arriving home to find the bag completely encased in a thin sheet of ice. But nothing has ever gotten wet. 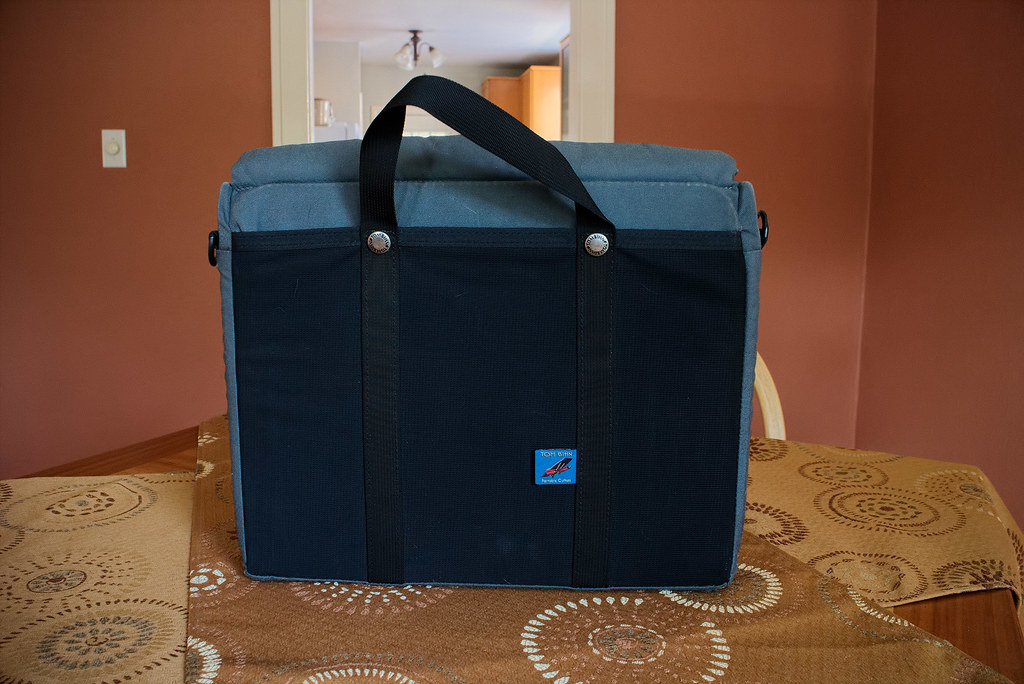 The main reason I settled on the ID as my messenger bag is that you can attach a Brain Cell inside to hold a laptop. The Brain Cell has corrugated plastic providing protection on the sides but more importantly suspends the laptop so it doesn’t touch the ground when you set the bag down. The Brain Cell itself is suspended in the ID, so my laptops have always been nicely protected even though they go out and about every day. My first Brain Cell was sized specifically for my 12″ Powerbook, but six months later I replaced it with a larger one when I upgraded to a 15″ Powerbook, and that Brain Cell has held all my laptops since. 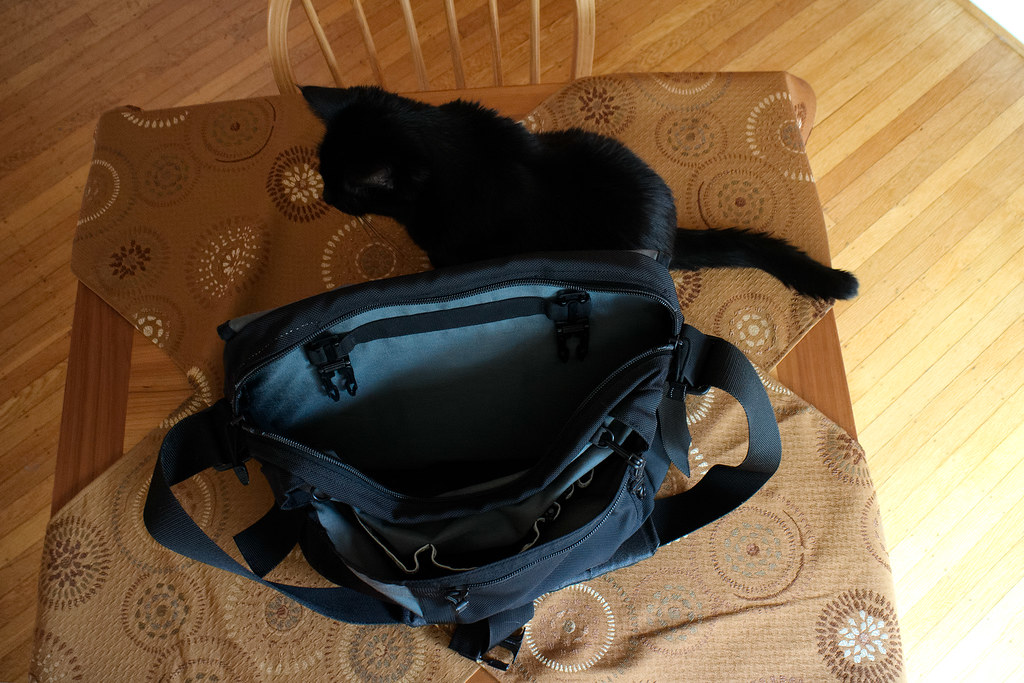 For nearly every day I’ve owned the ID, I’ve kept the Brain Cell attached in the main compartment to hold my laptop, as transporting my laptop is primarily how I use the bag. However the Brain Cell is removable as shown here, and I do use it this way occasionally to transport bulkier items. That’s our cat Emma beside the bag. She hates it when I try to take her picture but photobombs every picture she can. She’s a complicated girl, our sweet Em.

The bag has a few scars after its years of loyal service. There are a couple of scuff marks near the bottom of the bag. The thickly padded shoulder strap makes for comfortable carrying but the underside of the pad is flaking off after a decade of heavy use. But I thought the ID might be on its last legs late last year when the stitching around the rear zipper started coming apart in a few places. I rely on that zipper to pull in the corners of the laptop pocket and keep them safely under the outer flap when it rains (a feature I wish all messenger bags would adopt). Thankfully my wife was able to fix those sections but all she had was white thread, which you can see on the back left corner. I consider it a badge of honor. 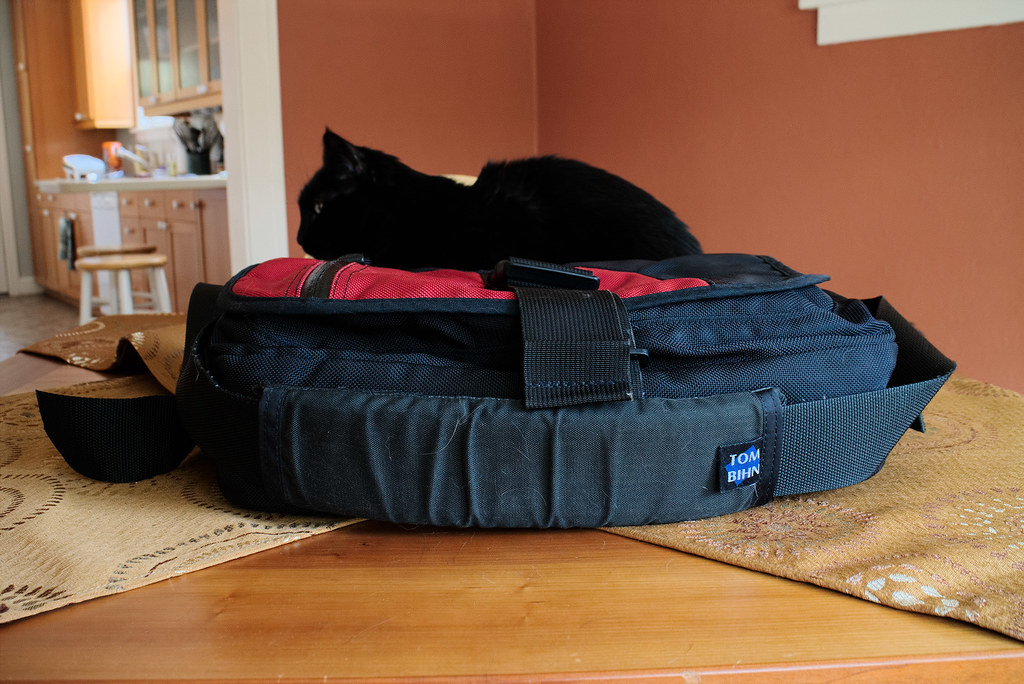 One of the things I love about the ID is the buckle & strap on the front that cinches the bag down into a thin profile when it isn’t heavily loaded, but quickly allows the bag to expand to hold coats and the like. One of the prongs on the big buckle broke a few years ago, and although it still closed securely I did replace it recently with a new one I ordered from the factory, just in case the other prong ever broke.

There are so many nice touches in the bag, I could go on and on, such as the o-rings for attaching key straps, the zippered front pocket for securing small items, the comfortable grab handle, the water-resistant zipper on the exposed pocket on the main flap. Newer bags also get an iPhone pocket, but I can’t hold it against mine for not having one, as back then there were no iPhones.

The one thing I haven’t used much is the water bottle pocket in front, it’s a little too small and short for many of my bottles, but this has been addressed in newer designs by moving the pocket outside the main body of the bag. The lines of the bag aren’t as clean but I think this is a much better place for it. 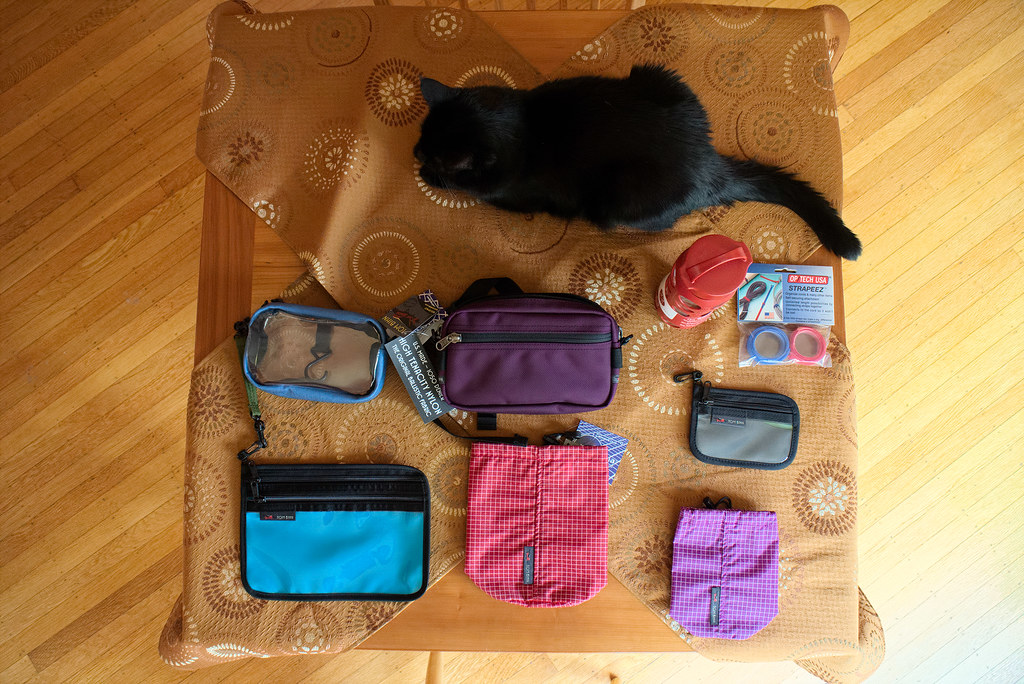 My biggest complaint is not with the bag but with me. Tom Bihn makes an assortment of small bags and organizers that clip to the o-rings inside the bag which would have come in handy for train and air travel, but I never availed myself of them. Better late than never, I recently ordered several bags (with Emma still hanging around for pictures). Going clockwise from the upper left we have a Storm 3D Clear Organizer Cube with an 8″ Olive Key Strap attached, an Aubergine/Wasabi Side Effect, a red Lifefactory 22oz glass water bottle, blue & red Op Tech Strapeez cable ties, a Forest Clear Organizer Wallet, an Ultraviolet Travel Stuff Sack (size 1), an Iberian Travel Stuff Sack (size 2), and a Turquoise Double Organizer Pouch (medium).

Tom Bihn designs and manufactures a variety of bags a bit to my north in Seattle, all with the same quality and thoughtfulness that went into the ID (I’ll soon be ordering a backpack and later a travel bag). So if you find one you like, I can’t recommend them highly enough.