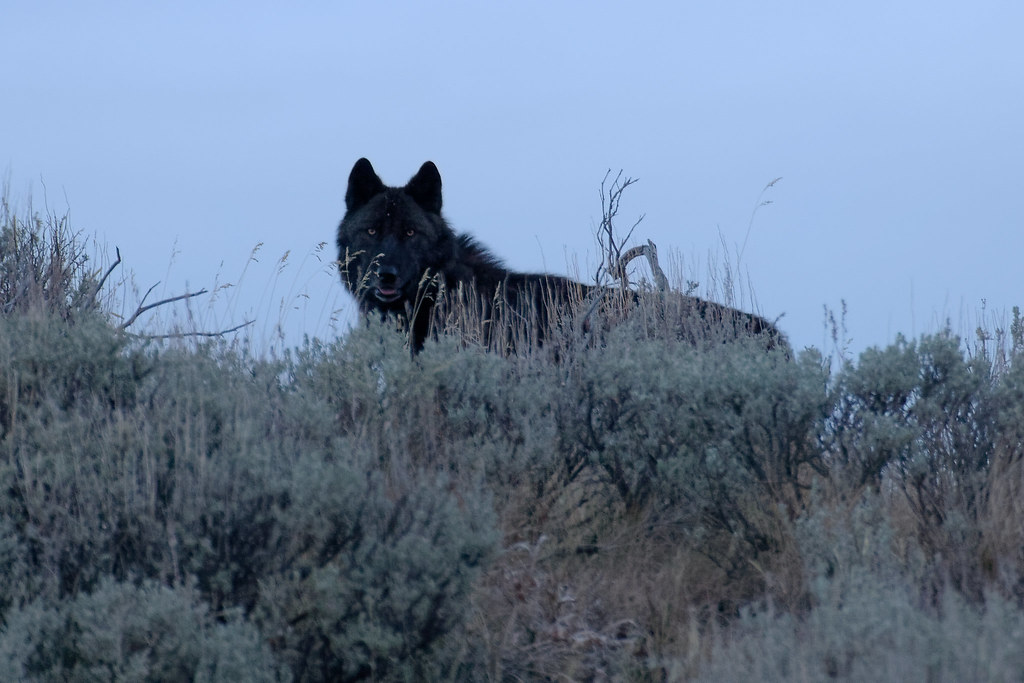 I spent a week in Yellowstone and the Tetons recently. Last year I visited for a week at the same time of year, where the Tetons amazed me day after day, while Yellowstone was more hit and miss. This year the roles reversed. The Tetons were fun with some great highlights, but I quickly realized how lucky I had been last year to see the animals and sights I did.

Yellowstone, however, took my breath away almost from the time I entered the park. On my first full day in the park, I had gotten some nice hiking in but didn’t see much wildlife. At the end of the day I had a great chance to watch black bears and a coyote from a close distance, along with a number of other people. It was getting late so I turned the car around and headed down from Mt. Washburn and back towards my hotel in Gardiner. I hadn’t gotten very far when a black shape crossed the road in front of me. The light was getting low and I only saw its shape and not details, but it took me just a split second to realize that I had just seen my first wolf.

At that point my excitement short-circuited my brain and I struggled to even remember how to stop the car and roll down the window. I barely managed this simple task and grabbed a camera from the seat next to me. The wolf had disappeared into the sagebrush however and left me to wonder at not only being lucky enough to see a wolf, but see it from a close distance. Suddenly the wolf popped up on the ridgeline, curious enough to stop for a quick look before continuing on its way. It stopped only for a moment but long enough for me to get a picture before it disappeared into the advancing darkness.

I pulled over at a nearby turnout, too afraid to look at my camera to see if I had gotten the shot. I eventually worked up the courage and brought up the image and while it was underexposed and a little out of focus, it came out surprisingly well given the circumstances. When I converted the RAW image, I tried to capture the feel of the moment, a dark shape suddenly appearing in the fading light.

Having watched a coyote just a few minutes earlier, the wolf’s larger size was particularly striking. This wolf has black fur, apparently one of several in this pack with dark coloration. My silent reverie was disrupted a few moments later when a pickup pulled into the pullout with me. I didn’t have the heart to tell them that they had just missed a close encounter with such an amazing creature. When the woman stepped out of the truck I had a little laugh at myself, as she was carrying an antenna, most likely tracking the wolf by the radio collar around its neck. The encounter wouldn’t have been so rare for her.

After getting back in the car, my spirits were high and I felt reborn. On the drive back to Gardiner I wondered what more Yellowstone could possibly offer in the coming days.