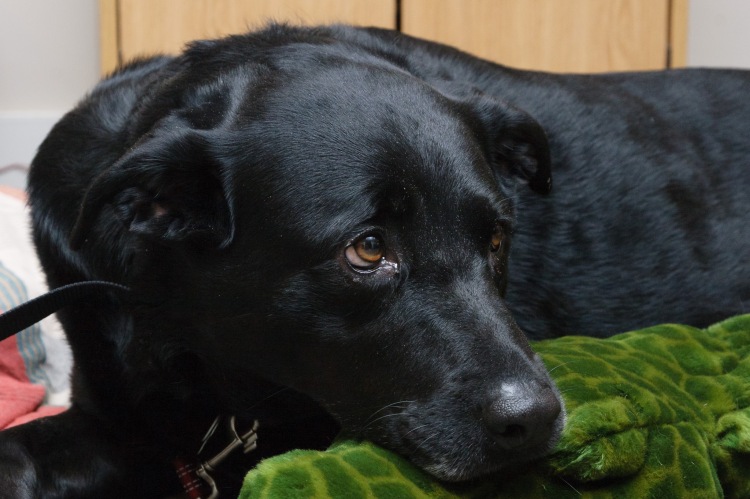 I knew how today was going to go, at least I thought I did, but thankfully life had a surprise in store.

I got up at 6:30 a.m. as planned, despite it being a Saturday, so we could drop off the ailing Subaru at the dealer. I came home and went back to sleep, planning on getting up in time to watch the two NFL playoff games today. I woke up for the second time as planned and heard Sam purring from his usual location in the gap between my knees. I reached down to pet him and felt Scout instead. Putting on my glasses I realized my mistake: Sam and Scout were cuddled up belly-to-belly with their legs wrapped around each other. Cutest thing I’ve ever seen.

As I settled in for football my day took an unexpected turn. I hit the Oregon Humane Society website to check for cat-friendly dogs, a daily ritual the past couple of weeks, and to my surprise there were several good candidates that just got added. I wrote down the list of five dogs I thought might work for us and down to the Humane Society we went.

I have a weakness for black labs and was surprised to see two on the list. I tried not to get my hopes up given our previous experience but today was our day! Lo and behold both labs were still available and we met and loved them both. We could only bring home one, I could have flipped a coin between the two, but my wife had a preference for 5-year old Sidka so ladies and gentlemen we had our dog!

We’re not sure about the name, we’ll probably change it to something similar, perhaps Sitka since it ties in well with the Northwest (many of the big trees in the rainforests of Olympic National Park are Sitka spruce, and I think you know how much fun I had on my recent visit there). She seems like a real sweetheart, we have her isolated from the cats for the time being in the basement. She kept me company while I watched football before I traded with my wife who is sleeping down there tonight.

We’re going to take the introduction to the cats as slow as needed, but there are good signs so far. The Emma part of the Emma Liberation Front made a mad dash under our legs and down the steps before I caught her on the landing in the middle of the stairwell. After that she mainly sat by the door and waited, at one point when the door opened, Sidka saw her and didn’t make any motions toward her. To my surprise Emma didn’t seem upset either, I hope she isn’t planning a rescue mission when we’re all asleep.

These are a couple of quick pictures of her, I didn’t try for too many today. It was dark by the time we got home and the batteries in my flash are nearly dead, plus I didn’t want to startle her in her first few hours with us. In the first picture she’s sleeping on a plush alligator that we’ve had for years, the cats have ignored it and she seemed to enjoy sleeping on it, so it’s hers if she wants it.