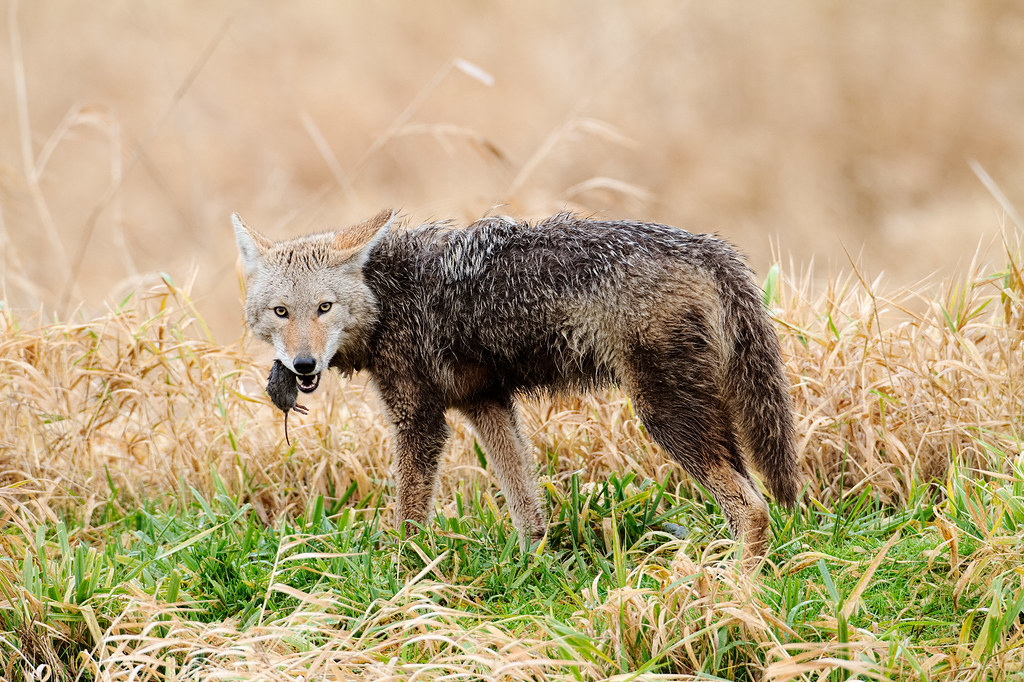 So it always is: when you escape to a desert the silence shouts in your ear.
Graham Greene, The Quiet American

When I first had in mind to replace my 2001 Honda Civic, I was thinking about avoiding the maintenance and reliability issues that come with old cars, about improved safety of new models, about getting back to the hatchback form factor that I love to an admittedly irrational degree, about maybe even switching to an all-wheel drive model.

But as much as anything what I really wanted was a nice quiet car for the auto tour at Ridgefield. And as far as Ridgefield cars go, the new little Toyota Prius c is at the top of my list.

It’s not a plug-in hybrid and would need to run the gas engine for much of the loop around the refuge, but that’s OK, where I really want the quiet of an electric car is when I need to move the car over very short distances at very slow speeds, such as when I was photographing this hunting coyote, one of a pair that slowly worked the marsh for Townsend’s voles on a rainy winter’s day. They were comfortable with me and paid me little heed, but even so I cringed whenever I had to start the car and disturb the stillness of the early morning.

It is easy to cross from one front seat to the next in the baby Prius, perfect for when I want to photograph from the passenger’s side of the car. It’s nice and short and narrow, good for parking along sections where there isn’t much room for other cars to get by. Plus it gets crazy good gas mileage in the stop-and-go conditions that define the auto tour (I typically move about in the 2 to 5 mph range, with a top speed of 10 mph or so, and lots of starting and stopping).

And best of all, it doesn’t make an annoying beep when it backs up the way the rest of the Prius family does.

But sadly our visit to the Portland Auto Show at the start of the year diminished my enthusiasm for the car. While the exterior of the car seemed nice as long as you spring for the alloy wheels, the interior seemed a bit cheap. But such is my love for Ridgefield that the Prius c remains in my top tier of cars should I decide the time has come to say goodbye to the Civic.