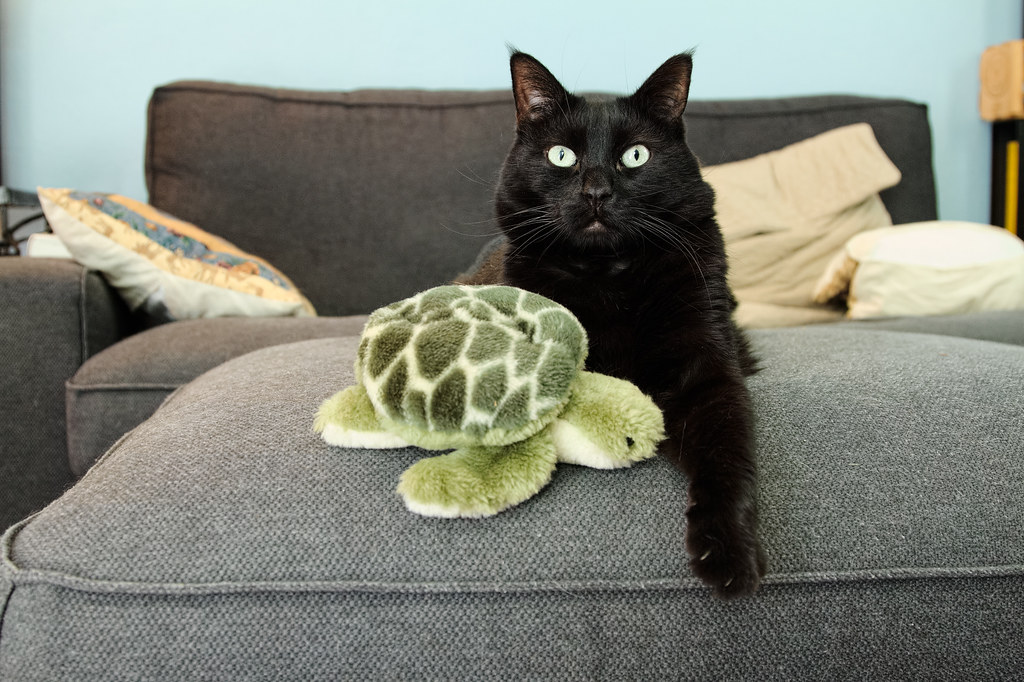 Emma was sitting on my love seat and I put her favorite toy beside her so I’d have a portrait of the two of them. She loved this turtle and would sometimes carry it with her around the house. Sometimes she’d run with it, murmuring as she went, I suppose pretending she was on a great hunt.

Or maybe she was just a big Gamera fan.

I didn’t sleep well for months after she died, having recurring bad dreams. Not nightmares in the traditional sense, but the one that occurred most often was me visiting my favorite refuge in my car and I’d end up accidentally driving into the water. The car would slowly fill with water as I drove it around trying to find a place to get back onto solid ground, but I wasn’t worried about drowning, and my steering wheel could somehow direct the car even when floating, but I was worried about ruining both the car and the refuge yet didn’t know what to do. Being in an unfamiliar and deteriorating situation was the common refrain to all the dreams.

It’s not too surprising that I was haunted by such dreams, given that she slowly slipped through our fingers even though no tests identified why she was sick, and she died even though we tried everything we could. The nightmares slowly faded as I came to grips with her death.

I haven’t been out hiking since she died apart from a quick trip to Ridgefield right afterwards, initially from a mix of not feeling up to it emotionally or physically. But as I began to get more sleep, and as time healed wounds, the desire to get back out on the trails slowly returned. Unfortunately some chronic stomach problems also returned, and I even stayed home from work today, but hopefully with the return of cooler weather things will return to normal (it’s been a blistering summer here in Portland and heat is one of the things that can trigger it).

I’ll start planning my fall hiking trip this weekend, so the Tom Bihn travel bag I ordered in December will finally get to come out of its box and be put to good use.