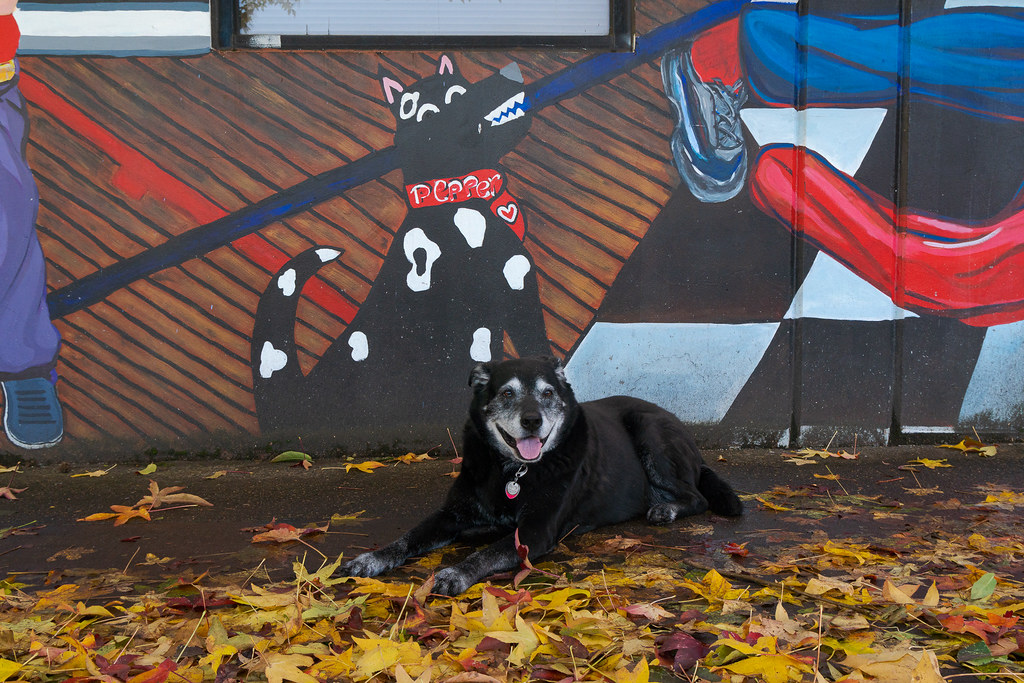 With the cooler weather of fall, Ellie doesn’t tire so easily and has been up for longer walks. Anti-inflammatory medicine and pain pills help with her advancing arthritis too. Since I’ve been home most mornings after getting laid off a few weeks ago, I’ve been able to take her on lots of long walks, a real treat since who knows how many more we’ll get together. She still enjoys going to see if her buddy Steve is out on his porch, as he gives her treats, but he’s only been out once. He mentioned that he was the caretaker of a man who just died and they weren’t sure if they were going to move someone else in for him to look after, or move him somewhere else and do some renovations on the house. Fortunately Ellie can’t hear well and thus is unaware her buddy might be moving.

Not far from Steve’s house is this mural on the side of a dialysis center that I frequently walked past on the way home from the train, so I was pleased to be able to get a picture of Ellie next to the perpetually smiling Pepper. I wasn’t sure if I’d get the picture even though she wanted to come down this way on multiple days (mostly I think to double back to give him Steve a second chance to be on his porch), as the blinds in the window above Pepper were open and I didn’t want the people inside getting treatment to worry about why someone outside was taking pictures. On this day though the blinds were drawn and I got my picture of the two good pups.