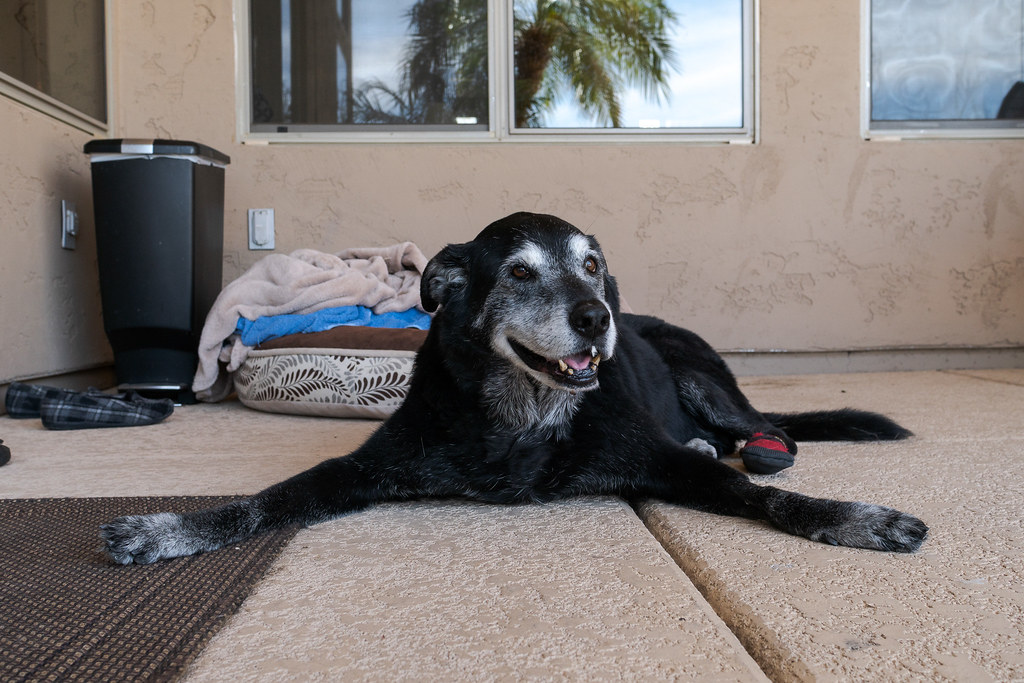 It’s been a rough month for Ellie.

She’s getting rather senile but she knew the rental house well, inside and out, and that familiarity allowed her to better mask the times she got confused. The new house offered no such compensation in the early going and particularly in the evenings she got rather stressed by not knowing where to go, the most obvious example being when she fell in the pool on our first night here as she tried to take the route she would have at the old house. She’d relentlessly pace the house, into the backyard and through the house to the front, over and over again, trying to understand where she was.

She woke me out of bed, assuming she needed to go out to go to the bathroom I got up with her and took her out back, then to the front, then back inside, repeated a few times until I got her to lay down to try and calm her. I was the thing she could hold on to, so I held onto her, until we both fell asleep on the floor. I was continuously exhausted in those early days, initially I hoped to take some time off after the move but I got some good news at work that unfortunately meant I had to go in.

There is no relief from the ravages of time and she is having even more trouble walking now, often leading to accidents in the house, so sometimes when I’m hoping to head off to bed I’ll have a mess to clean up first. Thankfully my wife is home during the day, I honestly don’t know what we’d do if we were still in Portland and both working as taking care of Ellie has become a full-time job. She’s been able to look after Ellie during the day, including the arduous feeding of not just Ellie but the cats. It didn’t help that in the first week our cat Boo was also stressed about the move and not using the litter box but thankfully he’s been on the straight and narrow since.

One night as I got ready for bed I saw Ellie pacing up and down the hallway and assumed she needed to go out, and quickly, but as I approached I saw bright red drops of blood up and down the hallway. Thankfully it was just a nose bleed and the biggest consequence was that after scrubbing the hallway I was too awake to go to sleep. We’ve gotten shoes to help her on the non-carpeted parts of the house, though she doesn’t like wearing them, and have gotten washable rugs to cover large parts of the tile so she can walk more easily. To compensate for the lack of grass we laid out a small patch of artificial turf that she enjoys using on bathroom breaks if she can make it there in time.

One day Ellie was pretty out of it, fortunately our wonderful vet was coming by for a visit and helped my wife get her into the car and to a 24-hour care facility where she got antibiotics and fluids, she had gotten dehydrated after a bout with diarrhea. The next day she came home and was the normal Ellie again, trying to charm her way into treats. You try not to get too down with the lows as you anxiously wait to see how far she’s going to bounce back after a setback.

One of our biggest challenges is that she doesn’t want to eat the food she should be eating, it is kinder to her slowly failing kidneys, the food she will eat often leads to soft stools and more accidents. The other big issue is a couple of days ago she slipped getting out of the car after a vet visit and hurt one of her front legs a bit, so now sometimes she has trouble walking at all, last night I had to carry her outside so she could use the bathroom. She fell asleep inside the sliding glass door so I left her there and took her shoes off so she’d be more comfortable, but when I woke she had at some point not only gotten up on her own (a rare feat for her these days) but walked across the house to the bedroom. And just now as she relaxed me with me on the patio she walked unaided out to her patch of turf to go to the bathroom. If only she could always move so!

It has been an exhausting month for all of us, but whether her time with us is numbered in days or weeks (months seems too much to hope for) I’m thankful for the opportunity to care for her at the end of her life. I wish we could have done the same for Scout and Emma, if disease hadn’t cut their lives short we’d be nursing Scout through her elderly years while Emma would be early in her senior years, endlessly chirping at the quail moving about her yard and letting me know which birds where in the yard by the style of her purrpurrations.

At the moment Ellie is sleeping peacefully at the foot of my couch, she wanted to come inside and made a beeline for my office so quickly that as I was stabilizing her rear end as she walked I wasn’t able to close the sliding door onto the patio. Trixie and Boo were curled up together on the cat tree beside the door but neither woke up so I was able to double back and close the door before either was the wiser. These are the moments I wish could last forever.