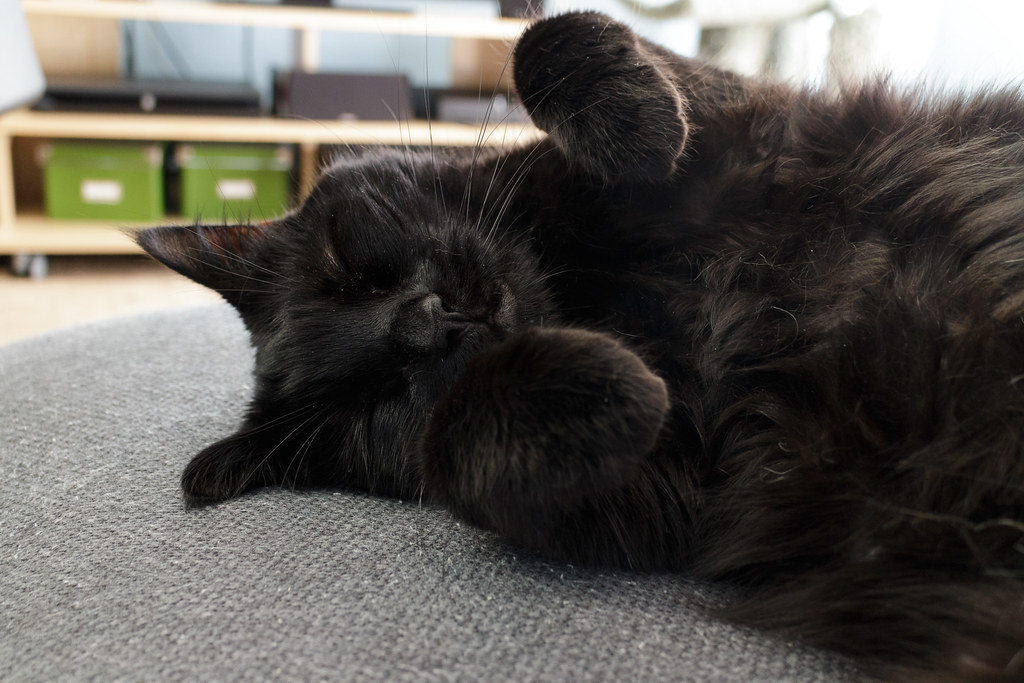 We didn’t bring my love seat from Portland as the affections of one dog and five cats had taken its toll over the years, especially from Emma (sleeping here on the matching ottoman in August of 2013). My wife also needed a sofa for her office in the den so she started looking while I was at work. We found a nice sofa for my office at a secondhand store and then tried a few other stores before visiting the store with a sofa my wife had seen and liked quite a bit, she wanted to see if I liked it as well.

The woman who helped her was named Loretta, we were introduced and she showed us a few options. She was the sort of salesperson you are lucky to find, she listened to what we wanted and guided us to the furniture they had that would work best for us. Not only did she not try to give us a hard sell to get us into an expensive custom set, she didn’t even give us a soft sell, rather after seeing that we both fit best on a reduced price floor model she happily sold that to us despite of how much less of a commission she must have gotten.

We also wanted an ottoman so she setup an appointment with my wife to go over the options and again, after listening to what we wanted, found one I think we’ll like and helped choose the colors. When they had the wrong phone number for us, because she lived kind of in this direction she stopped by the house to get the right number so there wouldn’t be any confusion or delays.

She was thinking of moving to Portland, her fiancé lives there, and I hoped they would be as happy there as we had been. Sadly it is not to be as we found out she died unexpectedly Thursday night. Given how briefly our lives had touched I was surprised how taken aback I was by the news. Given the past few months I’ve been worn out mentally and physically but she was kind and attentive and made everything so pleasant for both of us.

Here’s to Loretta and all those who are kind to strangers, not because of how much they’ll benefit, but because it’s who they are. If only briefly, I’m thankful we met.