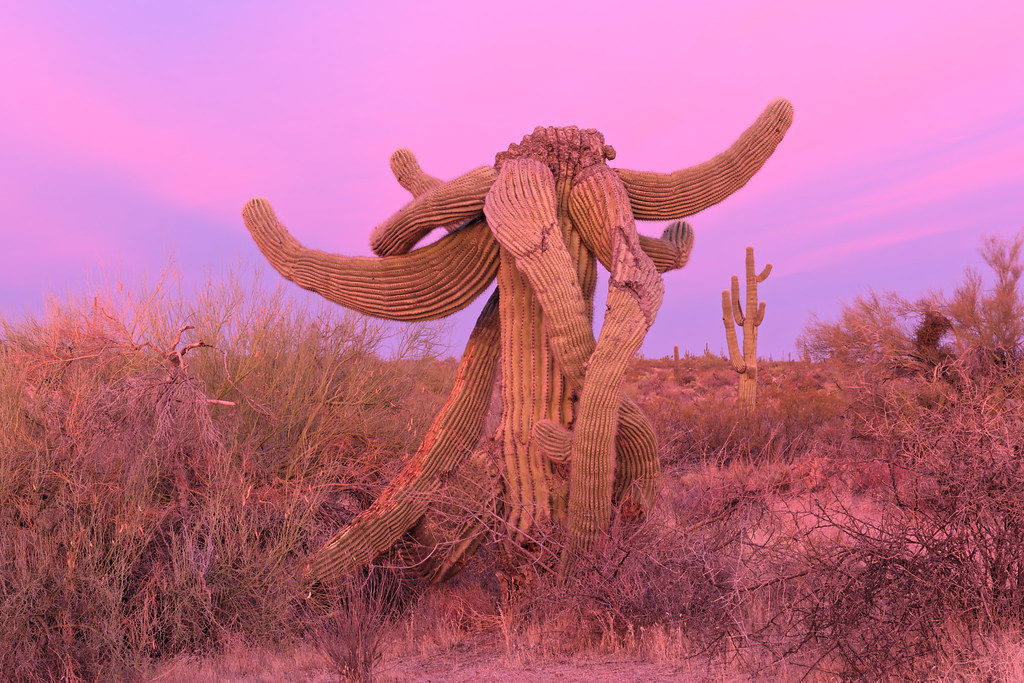 Clouds were predicted the morning of Christmas Eve so I dithered when my alarm rang out as I wanted to sleep in if the sun was going to be snuffed out, but I also didn’t want to miss out on colorful skies if it wasn’t. My vacillation wasn’t helped by a certain orange tabby who repeatedly woke me in the wee hours as he had a grand old time snuggling up under my chin, I love when he does it as it’s where Scout slept every night, but his timing could have been better. Fortunately I dragged myself out of bed, even if a few minutes later than intended, as when my wife dropped me off at the preserve the most glorious color was already spreading across the eastern sky.

I hurried down the trail towards my favorite saguaro, the Green Elephant, kicking myself for being a little behind but still careful with my footing as faceplanting into the unforgiving desert floor was not on my list of Christmas wishes. In the cool morning air I regretted not putting on my gloves in the car but I didn’t want to stop now. I took a few shots of the eastern sky on the way but the shot I most hoped for was of the Elephant looking west, so I was tickled to arrive and find the entire desert bathed in pink light with pink skies behind. The light was beginning to fade even as I started taking pictures so I was thankful I got off a shot from my favorite view of her, with a more traditional saguaro visible in the gap behind her, before the light faded to it’s normal pre-sunrise blue.

The pink skies behind her remained a little while longer and I expect I’ll like those subtler shots too. The sun rose fifteen minutes later and cleared the mountains soon thereafter but the clouds held sway and the remainder of the hike stayed cool and windy. Even in the dim light the desert was lovely as always, with phainopepla cheering my steps along the path.

This shot makes me a little sad, I noticed in the fall she has extensive damage along the arm on the lower left and also on another not visible from this angle. She looked fine when I saw her in full bloom at the end of May, but perhaps so did I, it hasn’t been the easiest year. We’re still standing though and every sunrise I spend with her is a treat, no matter the light.