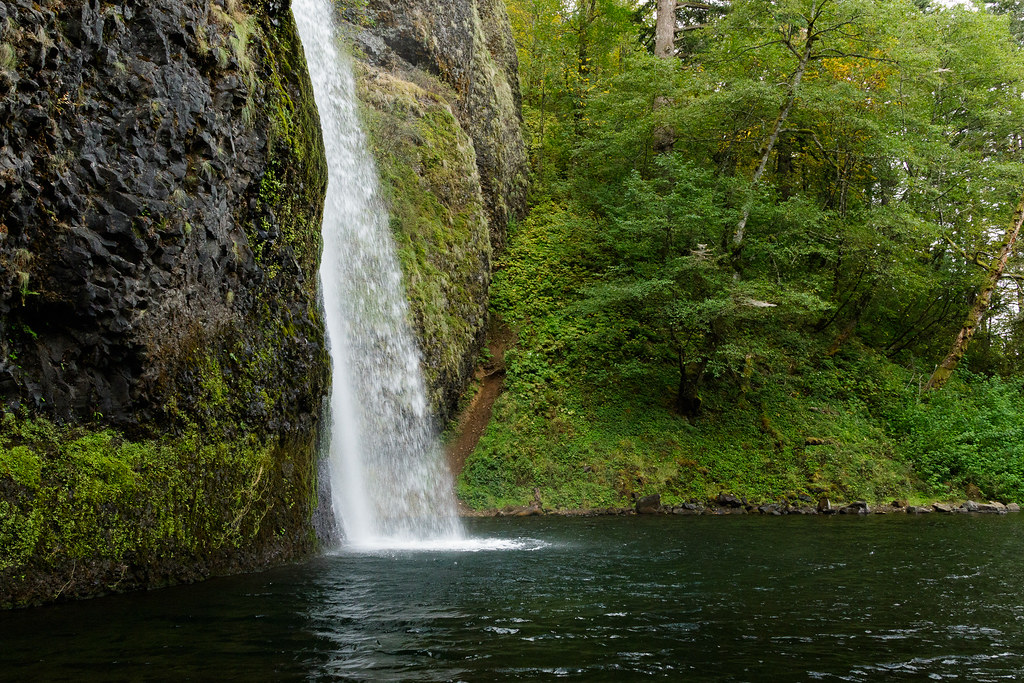 A side view of Horsetail Falls in Oregon’s Columbia River Gorge from the trailhead next to the road. This is my favorite place to hike near Portland but even after the Eagle Creek fire is contained I doubt this trail will be open until at least the spring. From the pictures I’ve seen this area wasn’t completely burned but some of the trees in the background are gone, no idea about further up towards the upper part of the falls, my favorite waterfall. The nearby interstate is still closed as they work to clear dangerous trees and stabilize potential rockslides, work that will eventually have to be done on the trails before it is safe to let the public back in. I haven’t heard if my feared bridge survived, but I suspect a number of bridges will need to be replaced.

I hope the pikas are doing OK too but there is much work to be done yet by the firefighters to contain the blaze before the full extent of the fire can be determined. Some of the trails further east may be open during the winter, they should be less touched by the fire. I can explore other places too of course, but when I needed to immerse myself in beauty for a few hours, all these hikes are within a half hour’s drive from my house in Portland.

The Gorge will still be there, and will still be beautiful, even if part of it has a long recovery ahead. As this alternate view of the falls shows, the water of Horsetail Falls plunges past basalt, a reminder of the forces of lava and floods that violently changed the landscape long ago and gave us the Gorge that we love so much. 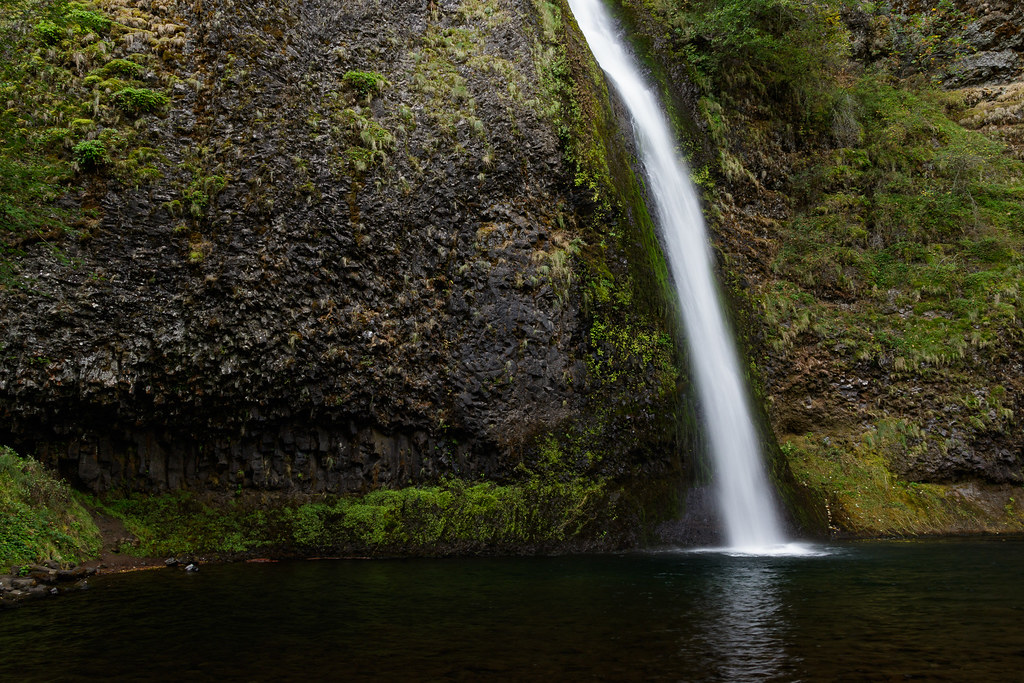 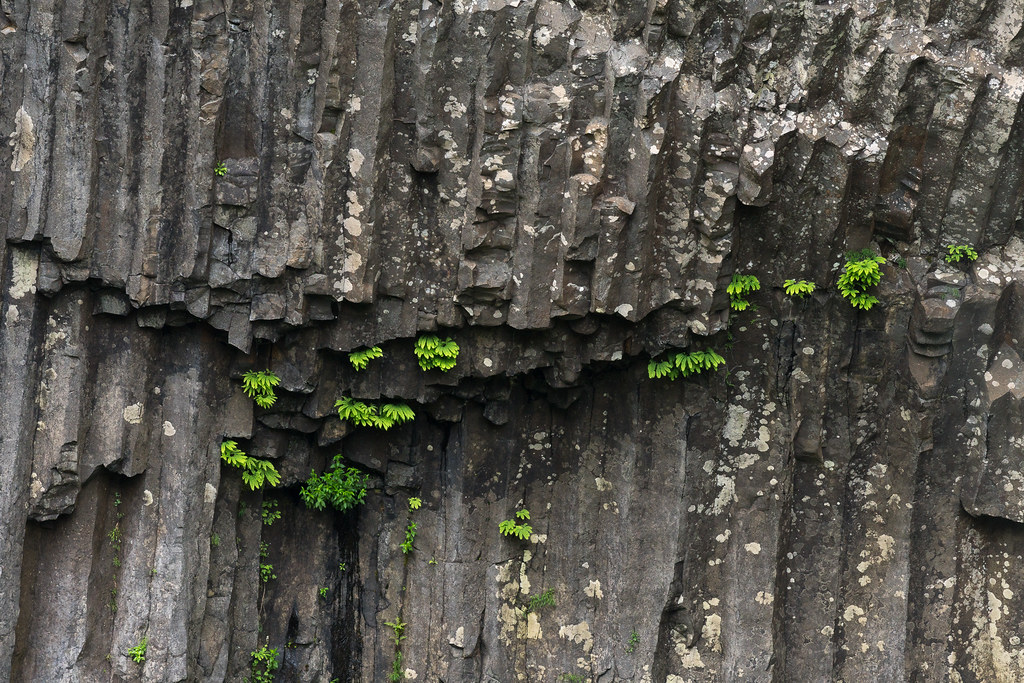 At Latourell Falls in Oregon’s Columbia River Gorge, ferns grown not just in the earth but on the columnar basalt near the falls. The ferns must be able to get enough purchase in the cracks of the basalt to not get blown off by the wind, and that wind brings enough water over from the falls (just to the right of this picture) that they can survive. There is lichen growing here too, but not the dramatic yellow lichen that grows further up the cliff face.

I love this place. 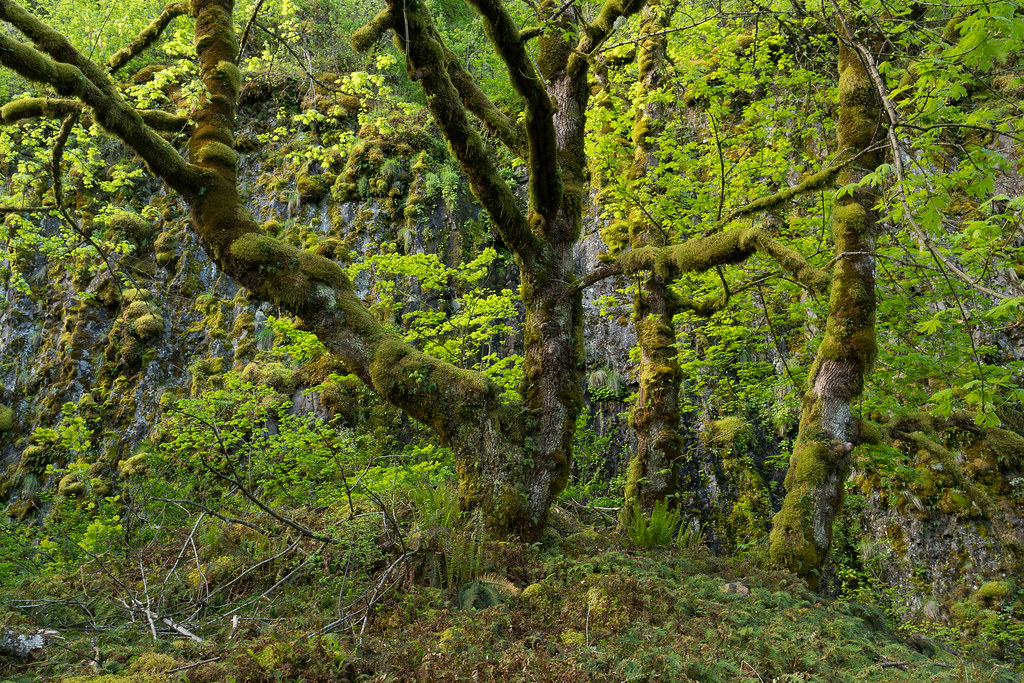 My father passed away earlier today.

He was diagnosed with an untreatable brain tumor months ago and had been in slow decline since. We weren’t close, I hadn’t seen him in a couple of decades, but there were parts of him I loved. I post this in his memory because many of my fondest memories of him were when we hiked in the hills of eastern Tennessee where I grew up. They weren’t grand scenes or amazing vistas, just what became my favorite hikes – through forests and past mountain streams. This picture is from Oregon, not Tennessee, taken a month ago in the Columbia River Gorge up above Horsetail Falls. It’s too chaotic to be pretty but illustrates one of the reasons I love hiking here, the explosion of green in many shades from the leaves, moss, and ferns. Behind the trees are basalt walls, as covered in moss as the trees. Large ferns grow below the trees with little ferns growing on the tree itself. Not far away are mountain streams that plunge through the canyons in beautiful waterfalls. I think of him most when I hike, wishing we could have had an emotional bond, but very thankful that he taught me to appreciate the beautiful and the quiet and the serene.

I grew up knowing I was loved, unconditionally, I never felt like I had to earn it through good grades (which I had) or being good at sports (which I wasn’t). That’s a powerful gift to give a child. He never encouraged me to seek money or power and get blinded by the rat race that I saw in some other fathers. There were plenty of happy times, like playing ping pong in the basement as I grew up. I’ll never forget the joy I felt the first time I beat him, or realizing years later that he must have let me beat him as a kindness. We camped and hiked. We spent hours in his workshop in the basement as he made things with his table saw and other tools, despite the fact that his son hadn’t inherited his mechanical skills and would be far too absent-minded to ever use dangerous power tools.

But as I grew into adulthood I came to realize that being in a close relationship with him was going to be destructive emotionally. The details aren’t important but by leaving them out I don’t want to make things sound worse than they were, he wasn’t abusive, but he had a way of seeing the world, and a tendency to take things in a negative light, that made it hard to get close to him. One incident in particular during my college years, after I spent a summer with him and thought we had set a more positive baseline for moving forward, made it clear to me that I was going to have to keep him at an emotional distance and hope for better in the future.

One of the last times I saw him was when I was in graduate school and he came to pick up his old Pontiac that he let me borrow when I needed a car to go between school and home on holiday breaks. I didn’t need it anymore as my stepfather had found a used car he thought I might like near his hometown and that ended up being the first car I bought. Dad came into my apartment for a while and when it was time for him to go, as we walked to the door and he turned to say goodbye, he had tears in his eyes and I wanted to grab him by the shoulders and let him know that this was the side of him I wanted in my life, the part that took pleasure in spending time with me and didn’t want it to end. I didn’t expect our relationship to be perfect or even easy, but at least open and honest. It wasn’t to be. He had a vision of me in his head that fit a narrative he needed it to, something we all do to an extent with others and even ourselves, but his was a wall I couldn’t climb.

At some point during those years I asked him if I could keep a picture he showed me, he was surprised and said yes but couldn’t understand why I wanted it. I didn’t tell him but it was simply because he had the most wonderful smile on his face. Not the kind you make when you smile for the camera, but a natural one, caught in a moment of pure joy. I hadn’t seen that smile in a long time and hoped one day to see it again. I never did but I’m sure others did and I’m thankful for the friends he had over the years, even if we couldn’t be close I’m glad he found happiness with others.

That picture, that smile, was a reminder of the beautiful part of him and it’s how I’ve visualized him for the many years since. It’s not that I don’t remember the bad, the bad is obviously why we’ve never been close, but I didn’t want to forget the good. We sent email occasionally over the years but never very often, but there was never a point where I felt like we could have a meaningful relationship. He knew about the blog but I don’t know how often he read it if at all. I sent him an email months ago when I first heard he had a brain tumor, letting him know how good my life was and how I still loved to hike like we had when I was growing up. I tried not to phrase it as a goodbye, he was still in decent health even though the long term prognosis wasn’t good, but it was a goodbye. I have no idea what he thought of me over the years or in the end, but I wanted him to know I love my life and am grateful for his part in that.

When I was young we were traveling somewhere to camp when someone in the car asked him what he would be if he could be anything he wanted (like me he was an engineer). He said he’d want to be a forest ranger and I laughed, thinking he was goofing around, and asked him what he really wanted to be. He said no, really, a forest ranger, and he said it in a way that even as a child I realized he was speaking a fundamental truth about himself. I reflected on his answer often, he didn’t choose a job that would make him wealthy or famous, but one that let him be out there in the quiet, near the trees and the babbling brooks, helping others enjoy them too. I didn’t ask him why he didn’t become a ranger, maybe he chose a higher paying job with a family to raise, maybe he realized that about himself too late. Maybe I took him too literally.

I don’t know if he continued hiking through the years, but even if not it was certainly a gift he passed on to me. He also was interested in computers even in the early 80’s and bought a Mac when they first came out to use in his business, he let me type my school essays on it at night and I fell in love with computers because of that beautiful thing. We had a wonderful dog that was with me through most of my childhood and if you’ve been here long you know how much I love my pets. Part of me feels like my father’s son, part of me not at all. I’m sure I could have been a better son, but even at the end some of his behavior reminded me why he hasn’t been a meaningful part of my life for so long.

The tears I shed as I write this are for decades of frustration, at wishing I could have known more of the beautiful part of him. I’m thankful that some people got to know it, and that for a while I did too. 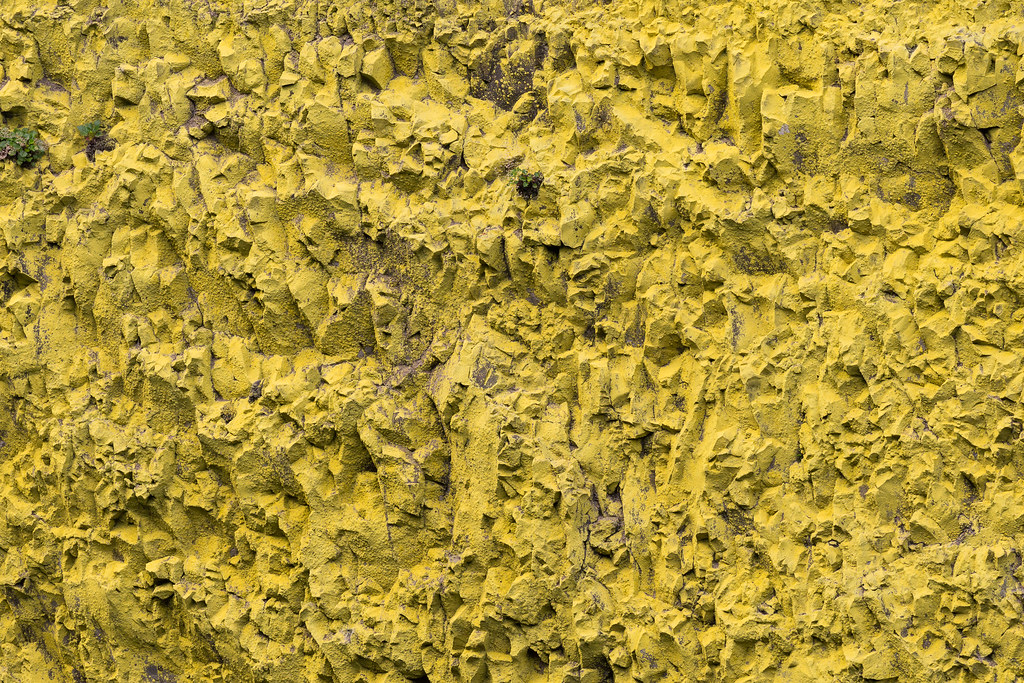 One of the reasons I went to Latourell Falls was to see if I could get close-ups of the massive yellow lichen patch near the waterfall. I brought my 100-400 Canon zoom and hooked it up to the Sony A6500 and found the biggest difficulty while trying to manually focus was that, as I had the peaking indicator set to yellow, and since I was photographing a fairly flat scene, the whole screen would practically light up yellow when the scene was in focus. But since everything was already yellow …

You can change the focus peaking color but I couldn’t remember how and since I was in no hurry I was able to zoom in on the display and get the focus set. If I could have seen a bit better I would have shifted things slightly so the plants on the far left would have been a little further inside the picture, but I was pretty happy with this as a first attempt.

I’m amazed by the diverse forms that life takes, and how often life can take a foothold even in inhospitable areas. 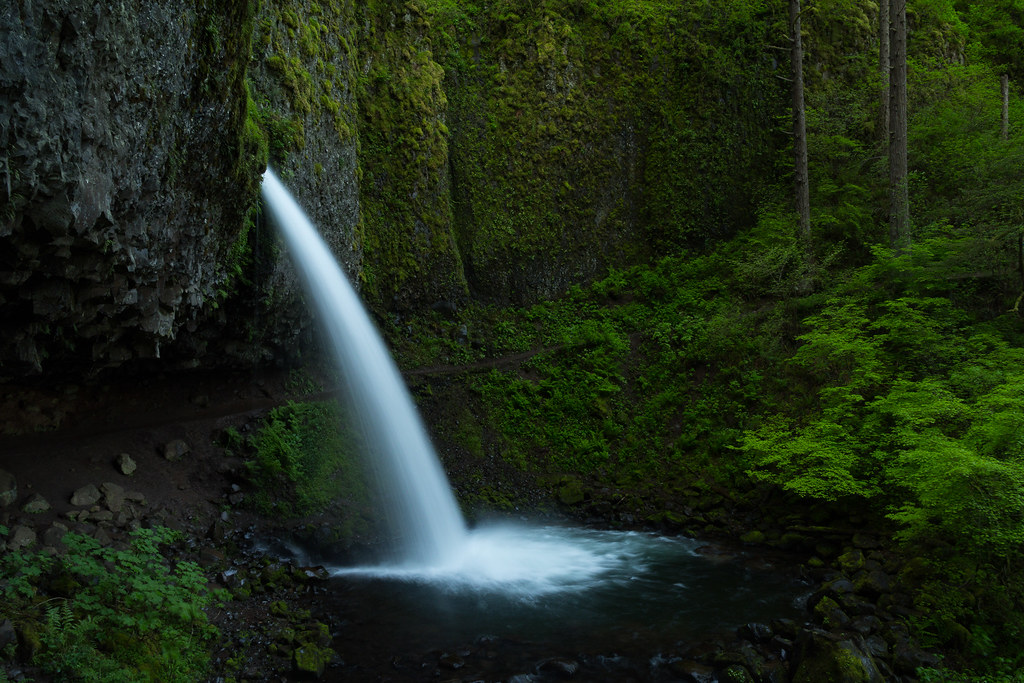 A simple portrait of one of my favorite places, Upper Horsetail Falls (also known as Ponytail Falls) in Oregon’s Columbia River Gorge. This is what I wish my backyard looked like, but it took a massive volcanic eruption and historic flood to create it, and I’m not sure that would go over well with the neighbors.