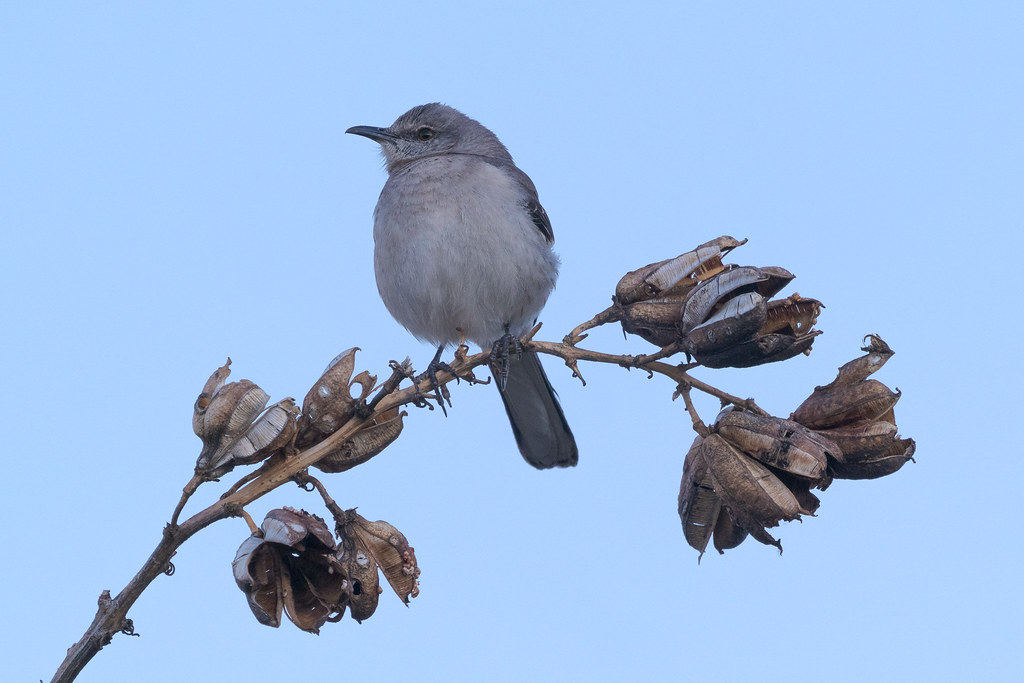 With a headache not yet relenting I was delighted to be greeted as soon as I stepped off the parking lot by the songs of a mockingbird, perched on the flower stalk of a soaptree yucca. Technically the sun had risen but it would be a little while before it cleared the mountains and bathed us in its warm light. For now the mocker and I enjoyed the cool and the blue of the waking desert. I tore myself away in time to reach my target for the morning, a ladder-backed woodpecker, just as the sun arrived. 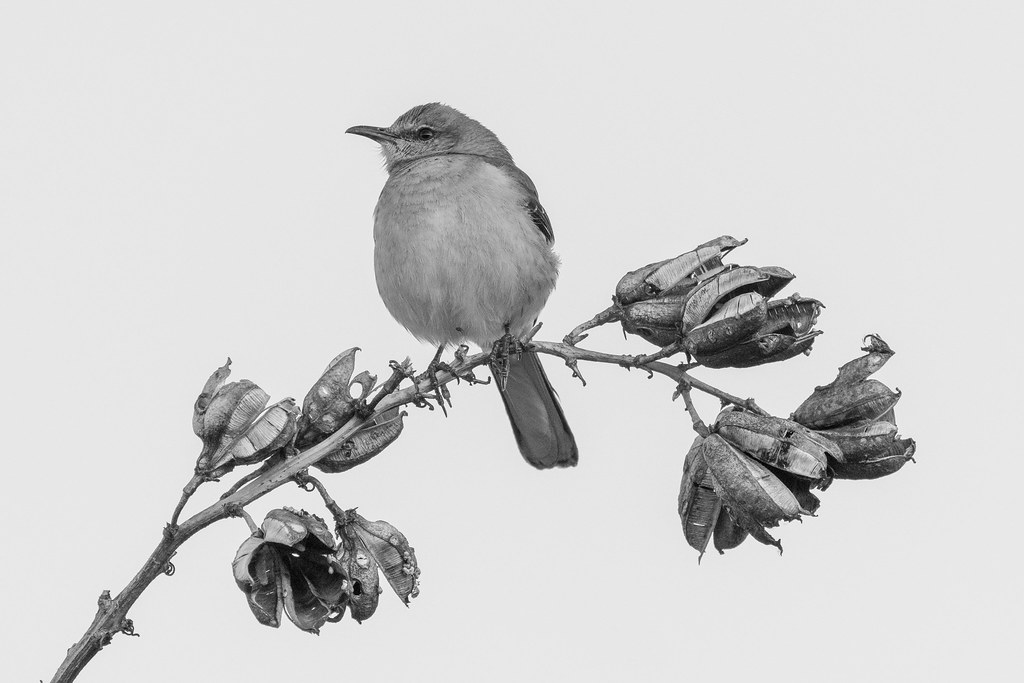 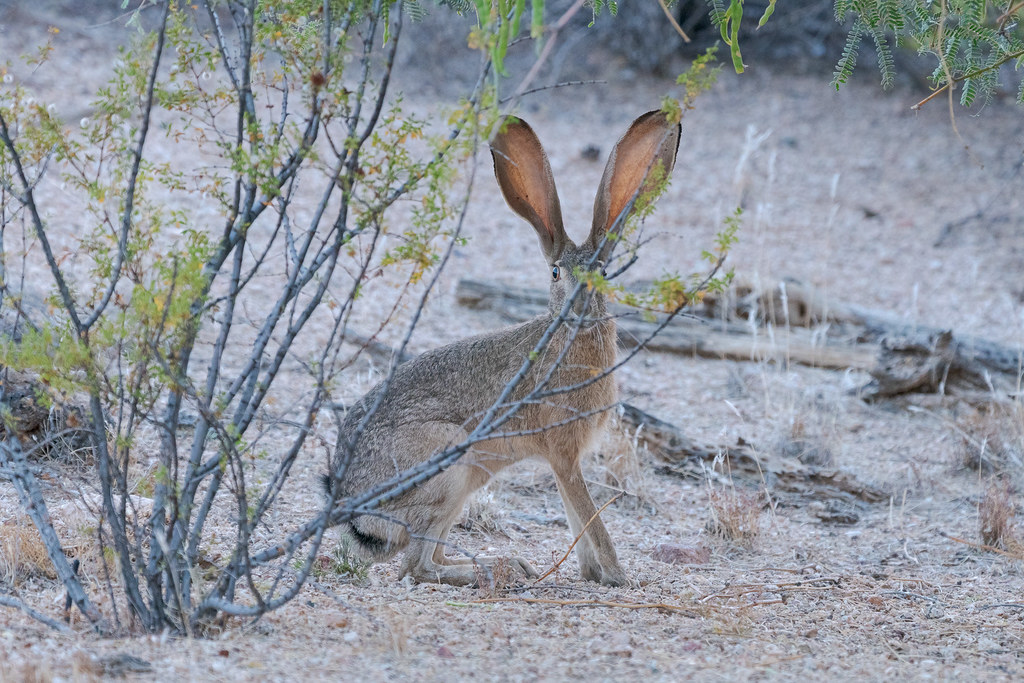 “No, no, you’re totally hidden behind the bush.”

Taken last year, got to watch this one for half an hour, have only had fleeting glimpses this year. 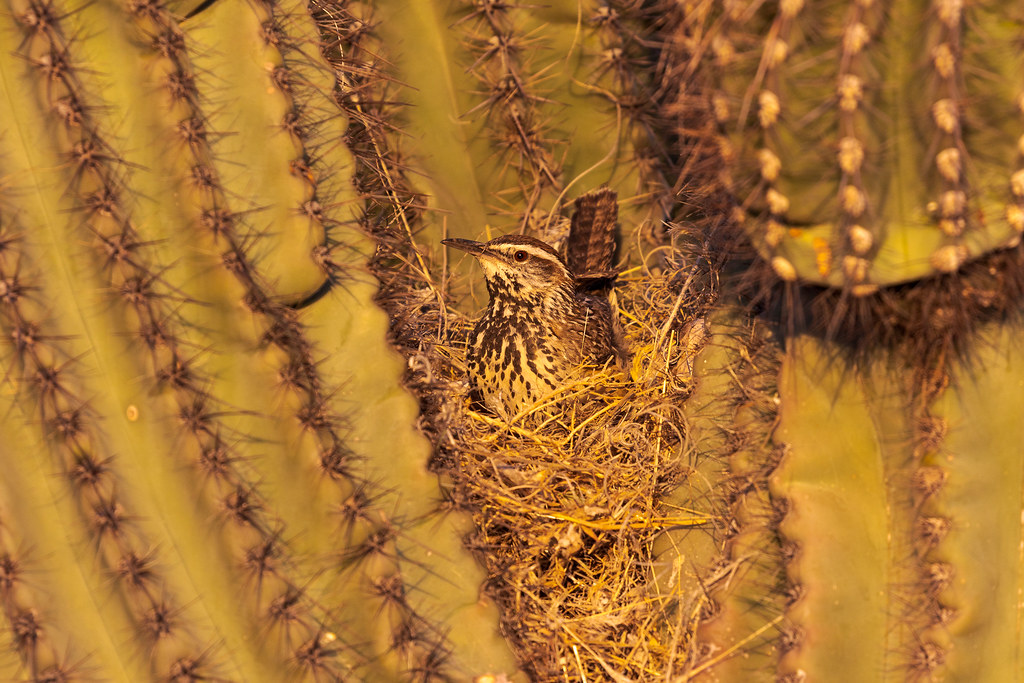 We bought a house!

We spent yesterday with our realtor visiting a handful of houses we hadn’t seen plus our two favorites from prior visits. By the end of the day we were close to making an offer on our favorite but wanted to sleep on it. I went hiking this morning near my second favorite house and had a wonderful time and was satisfied I could be happy there, but all the same my overall favorite retained its crown. My wife felt the same so we met our agent this afternoon and put in an offer and the sellers accepted it!

We’re both excited and exhausted!

We first arrived in Arizona at the tail end of March, a month later I met this cactus wren early one morning as it built its nest in the arms of a saguaro. As it tried out the nest I assumed its home was nearly complete and that it was applying the finishing touches before eggs were laid and babies were raised. It showed how much I had to learn about my new home as the wrens still had plenty of work to do, building up the sides of the nest and putting a roof on top to protect from the desert sun, with an entrance in the side they could fly in and out of as they brought food in and took waste out.

There is still work to be done before we take possession of our house too, we close at the end of February and will move sometime in March. But tonight it is enough to be thankful for the opportunity we had to come to Arizona after our time in Oregon came to an end, that we were able to leave one wonderful place and arrive in another. I’m thankful for that little wren and for that big saguaro, for helping me fall in love so quickly with the Sonoran Desert. For the Gila woodpeckers, the gilded flickers, the curve-billed thrashers, the white-winged doves, the quail, the Gila monsters, the whiptails, the side-blotched lizards, the diamondbacks, the bobcat, the antelope squirrels, the cottontails, the jackrabbits. On and on and on.

The desert is our home, soon a house will be too. 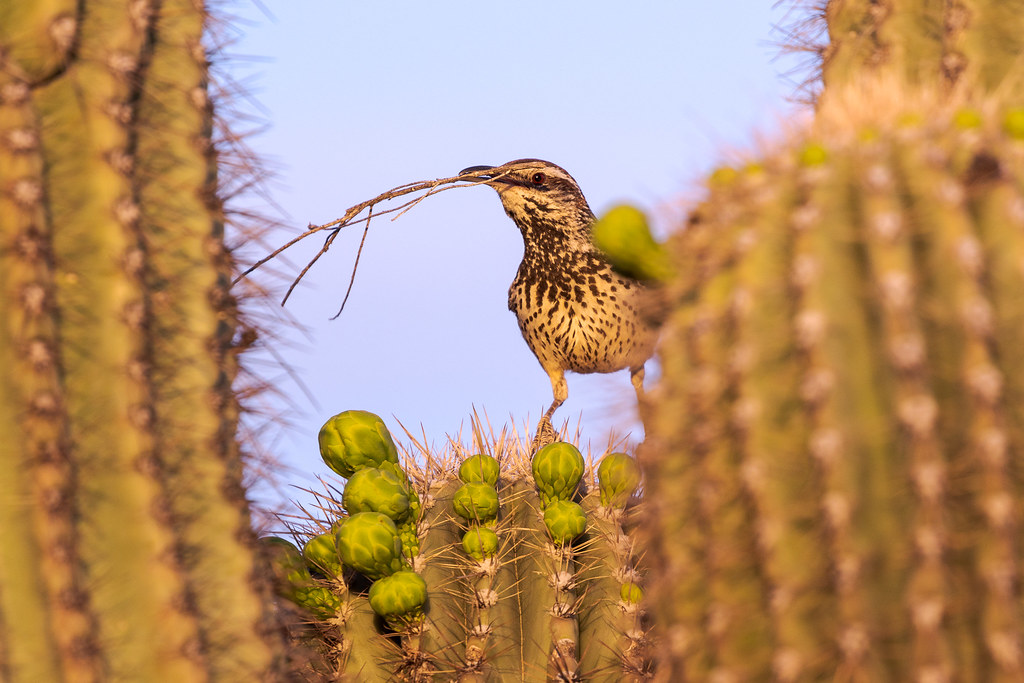 On April 28th I arrived at my first visit to Brown’s Ranch in McDowell Sonoran Preserve, my fifth hike and fourth hiking location since moving to Arizona a month prior. I was pleased that even though I arrived mentally and physically exhausted I was forcing myself to go out and explore some area parks, even though it meant getting up a while before sunrise. As soon as I stepped past the welcome center I was reminded that while I should be proud of all I had accomplished the past six months, my struggles had been minor compared to what many face every day. There in the arms of a saguaro, the light just cresting the distant hills, stood a cactus wren with a twig in its mouth, building a nest in such a seemingly inhospitable host in a seemingly inhospitable land. Brown’s Ranch became an immediate favorite as did the plucky wrens that in the coming weeks I got to watch not just build their nests but raise their families in them. 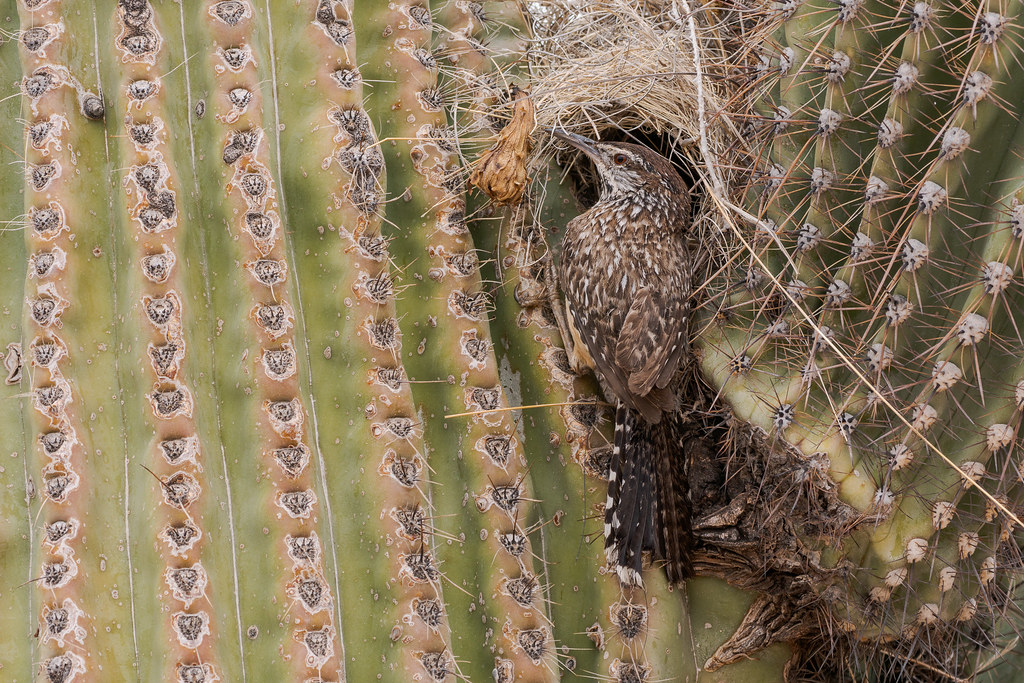 A cactus wren prepares to enter its nest in the arms of a saguaro, the nest has a side entrance and a covered roof. 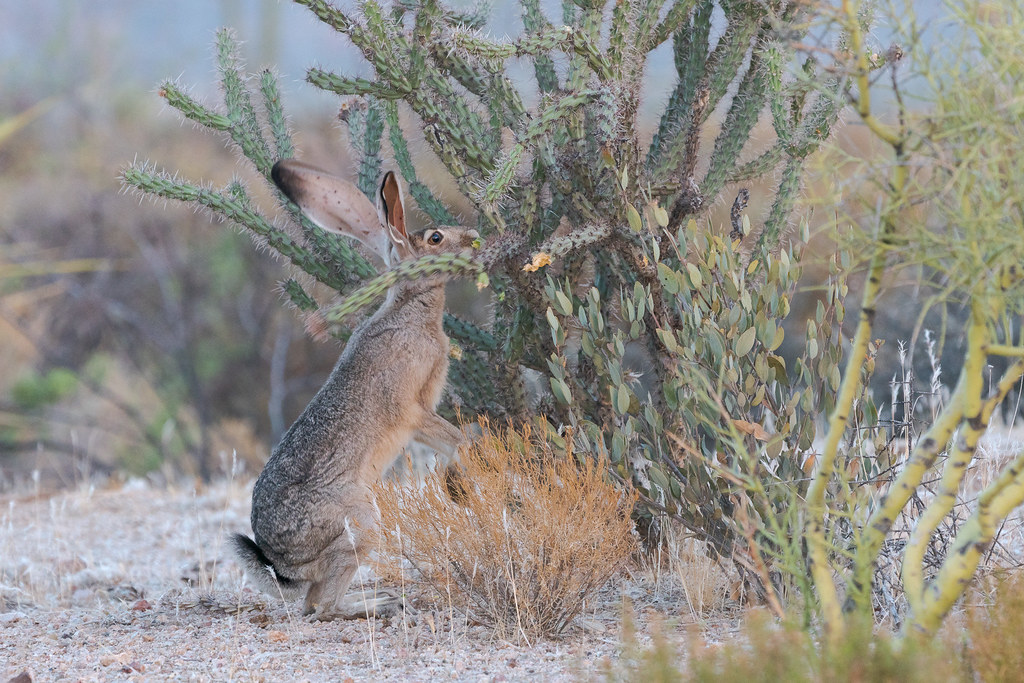 A black-tailed jackrabbit eats from a buckhorn cholla, one of the types of cactus commonly seen in the Sonoran Desert. 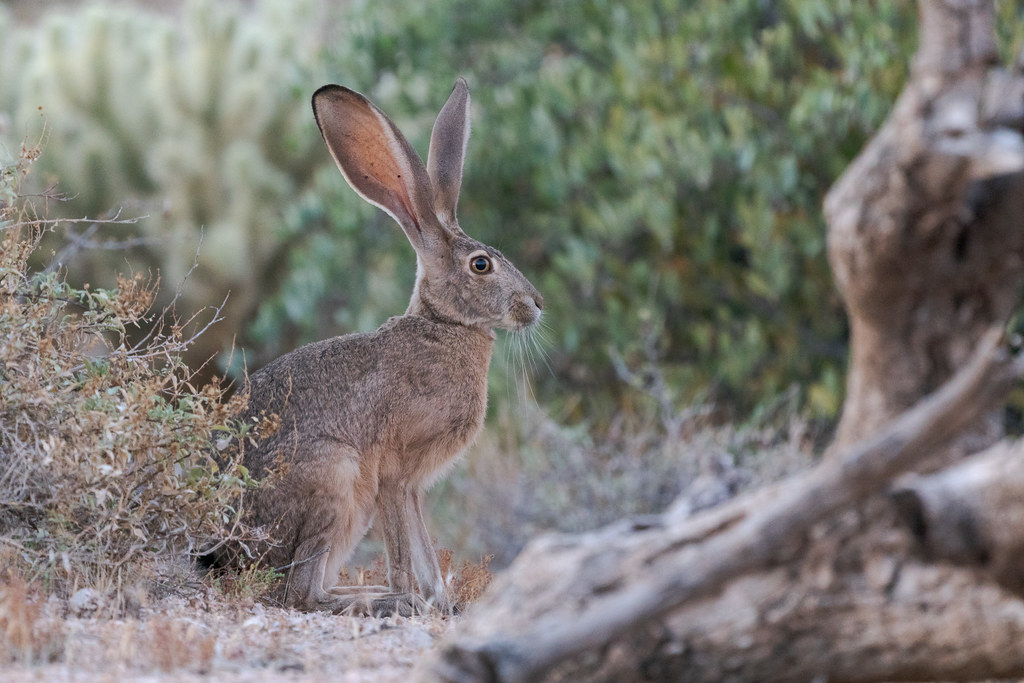 I am amazed how effortlessly and silently mammals move through their home while I stumble down the trail. The jackrabbits seem like spirits floating through the desert, I often first notice the black tips of their tall ears moving while the rabbit itself is blocked from sight by the many plants of the scrubland. This lovely creature I found not on the trails but at the trailhead of Brown’s Ranch, we shared a quiet moment before sunup.

The rabbit you are most likely to see at the trailhead, and on the trail, is the desert cottontail (below). They too move silently through the desert but are so much smaller than the jackrabbits that you see them when you see them, there are no tall black tips dancing in the early light to catch your eye. Like all the mammals your best bet to see them is to arrive early, here also at the trailhead but just as the sun began peeking through to send one of us onto the trails and one to bed.

Walking in the Sonoran Desert at sunrise, seeing the desert both wake up and go to sleep, is a joy and a treasure even to this lifelong night owl. 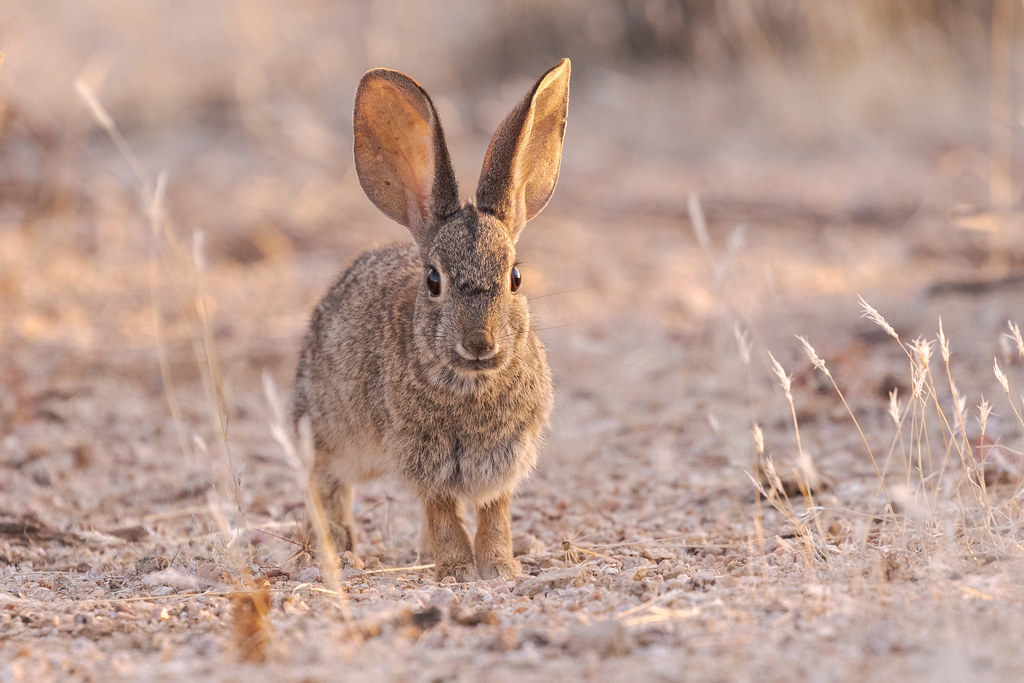