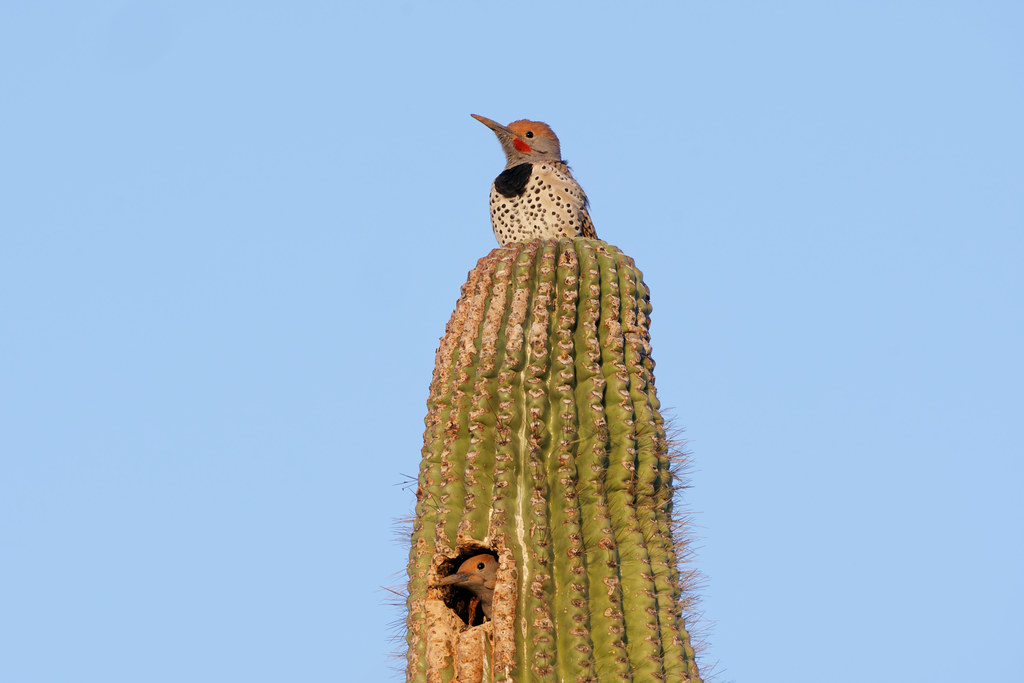 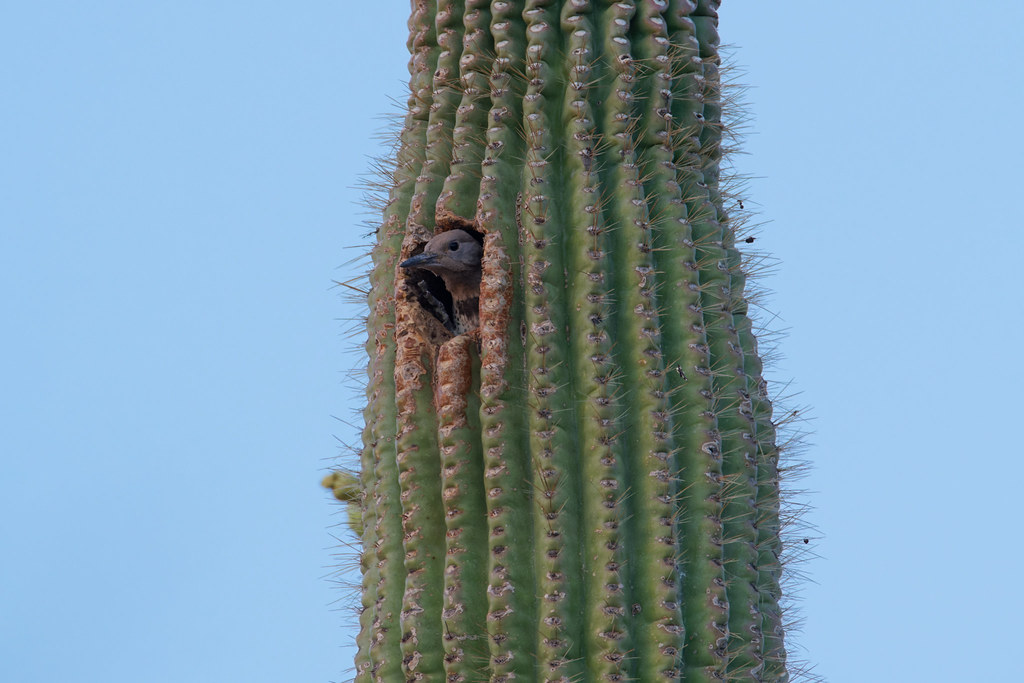 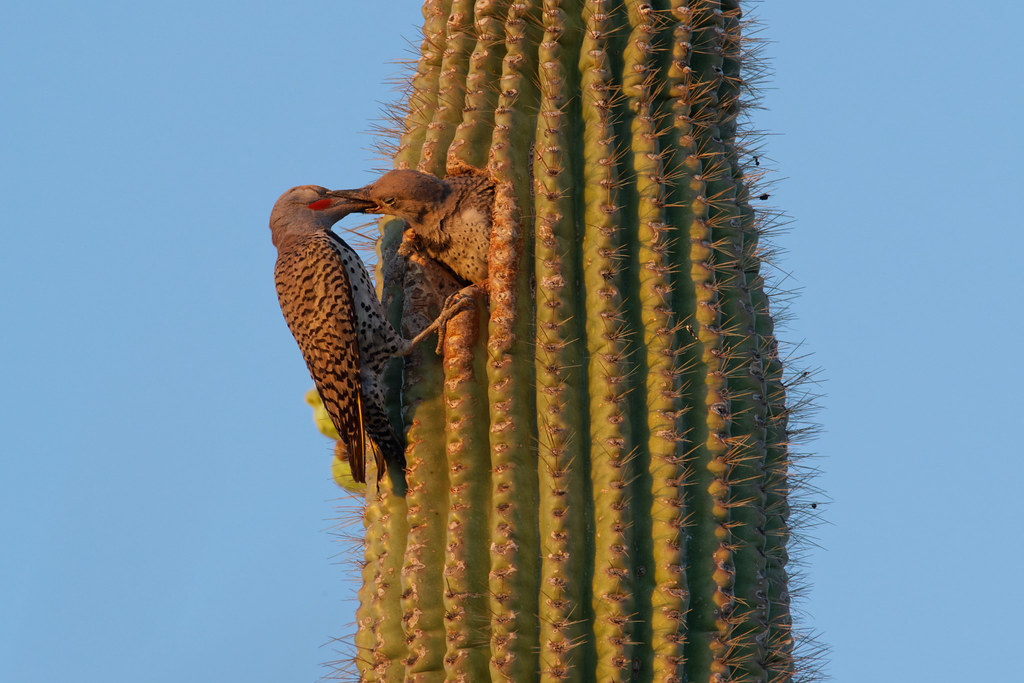 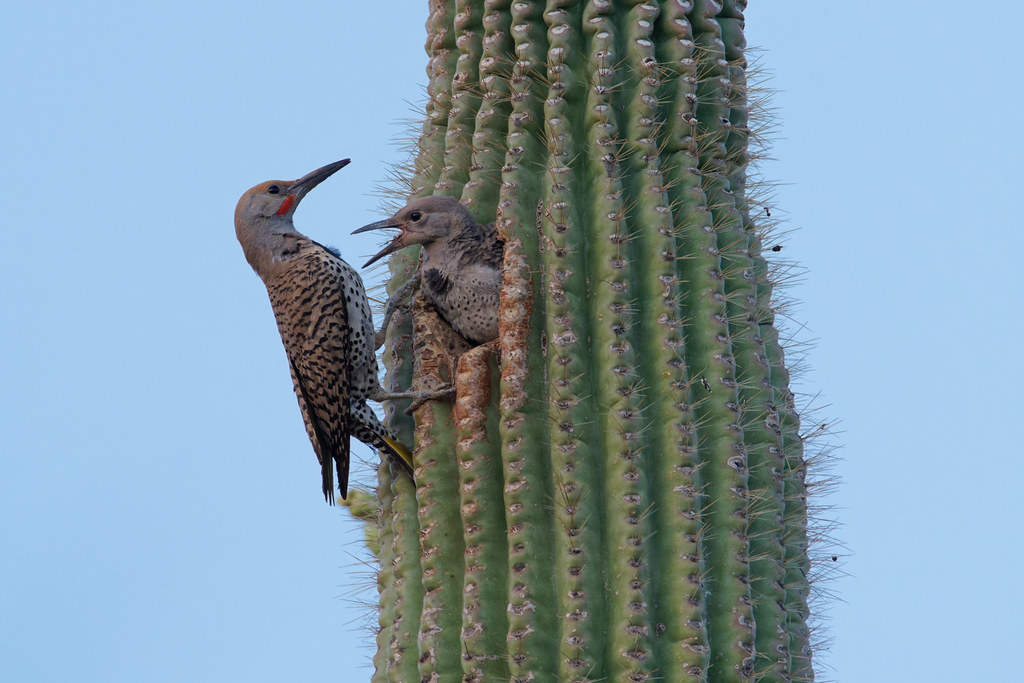 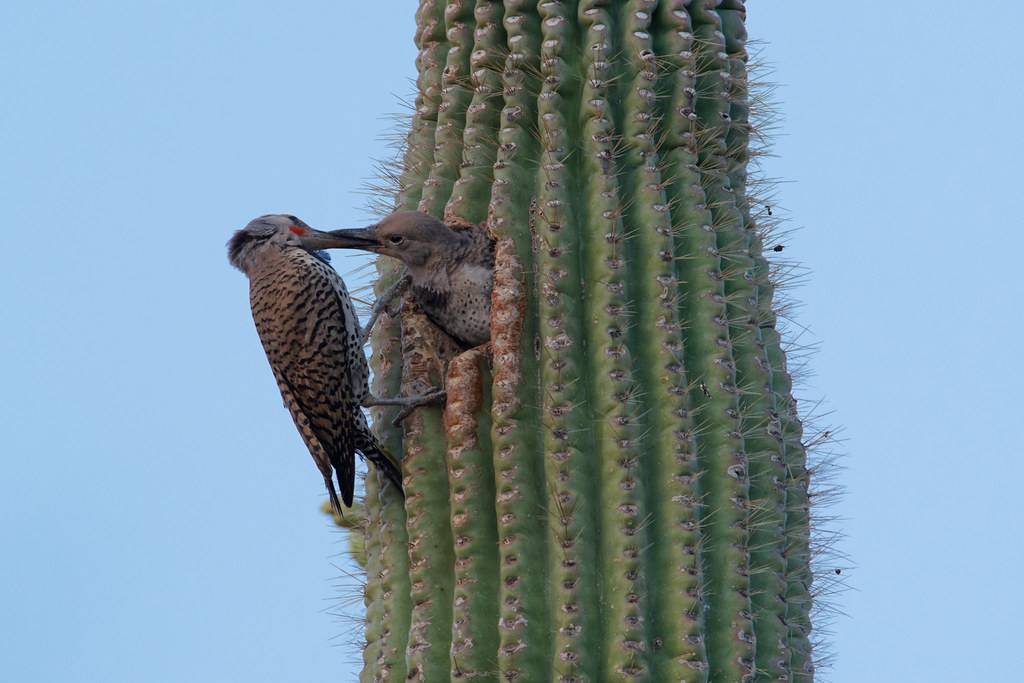 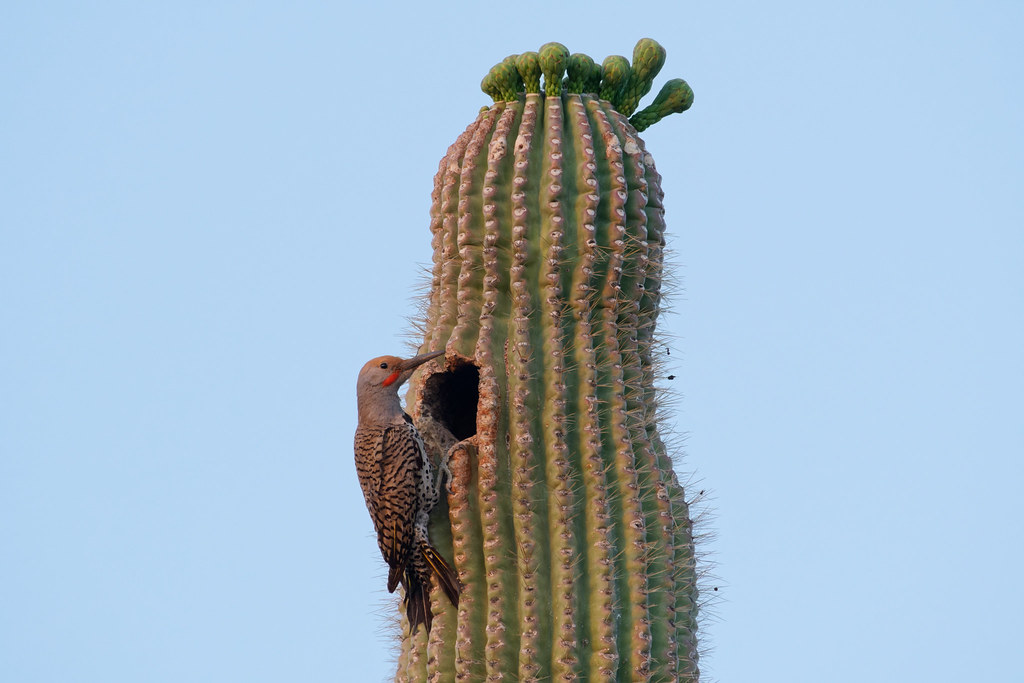 My favorite times to be in the desert are around sunrise and sunset, transfixed by how rapidly the light rises and falls, changing not only in intensity but color. I love the moment as the sun fades when a little diffuse red light mixes in with the heavier scattered blues, similar to the light here. But the sun, while low in the sky, had not yet set, instead blocked by a band of smoke in the northwest from a burning desert. While a depressing sign of things to come in the drought-stricken West, there was hope before me too. Flower buds on an old saguaro, soon to burst into blossom. And a faithful flicker father landing at his nest, squeaking voices inside welcoming him home. 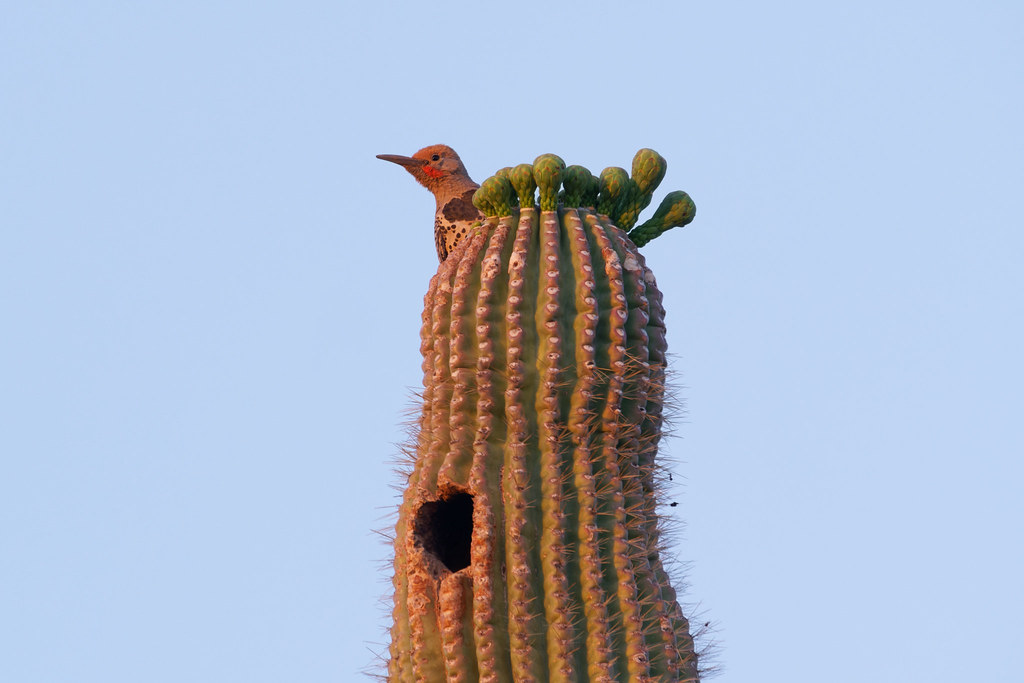 A few weeks back flower buds dotted the tops of saguaro arms with the occasional early bloomers producing a flower or two. Normally the flowers are white but this one appeared to have a red mustache, perhaps a trick of the light as the sun dipped behind the mountains and only a little direct light fell upon the high points of the desert. 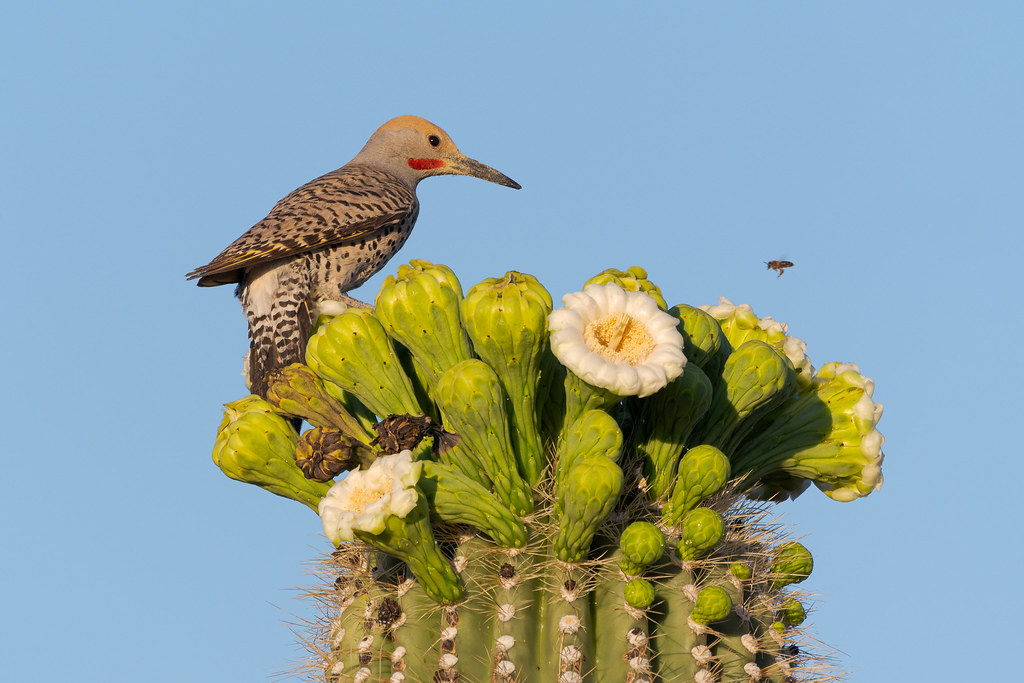 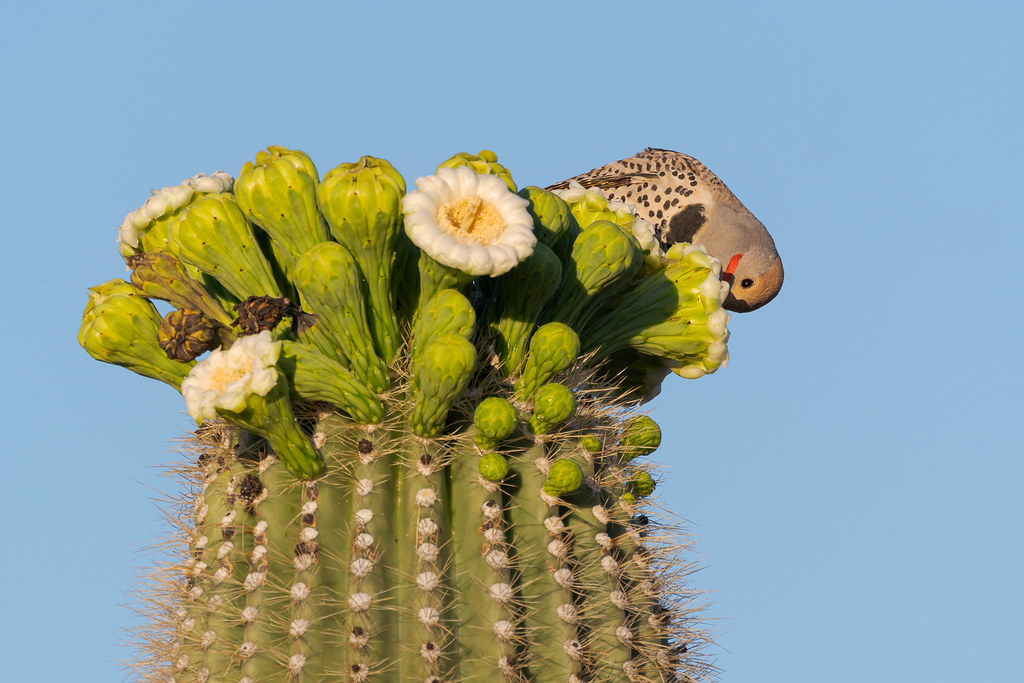 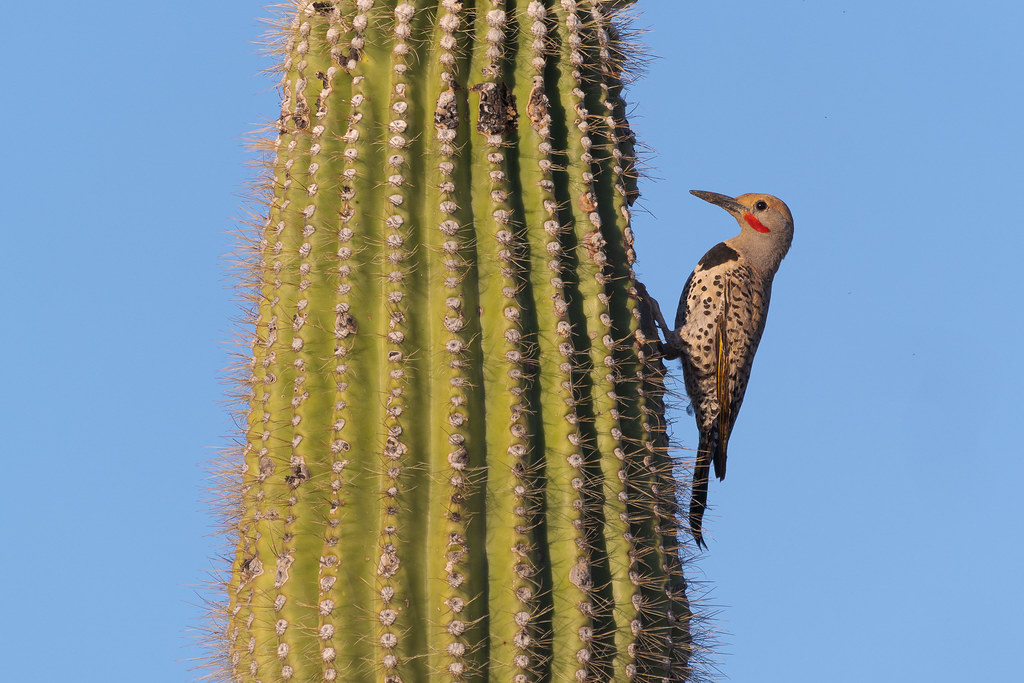 If the Sonoran Desert was naught but saguaros and woodpeckers it would still be a delight. I didn’t think I’d have a shot at this gilded flicker, I was watching flycatchers when he flew up to a hole near the top of a saguaro. Given the angle to the sun he was in shadow but for a moment he leaned far enough left that the light fell upon his profile, showing his red mustache and the yellow wing linings for which he is named. They apparently prefer making nests near the top where the newer growth is softer, while the Gila woodpeckers have stronger beaks that give them more latitude in where they drill their holes. I’m not sure if this was his nest hole or not, he didn’t bring any food in his bill and only looked in briefly, he might have just been interested in the flowers blooming above his head. But it could be he was afraid to enter with me watching so I bid adieu and continued on. 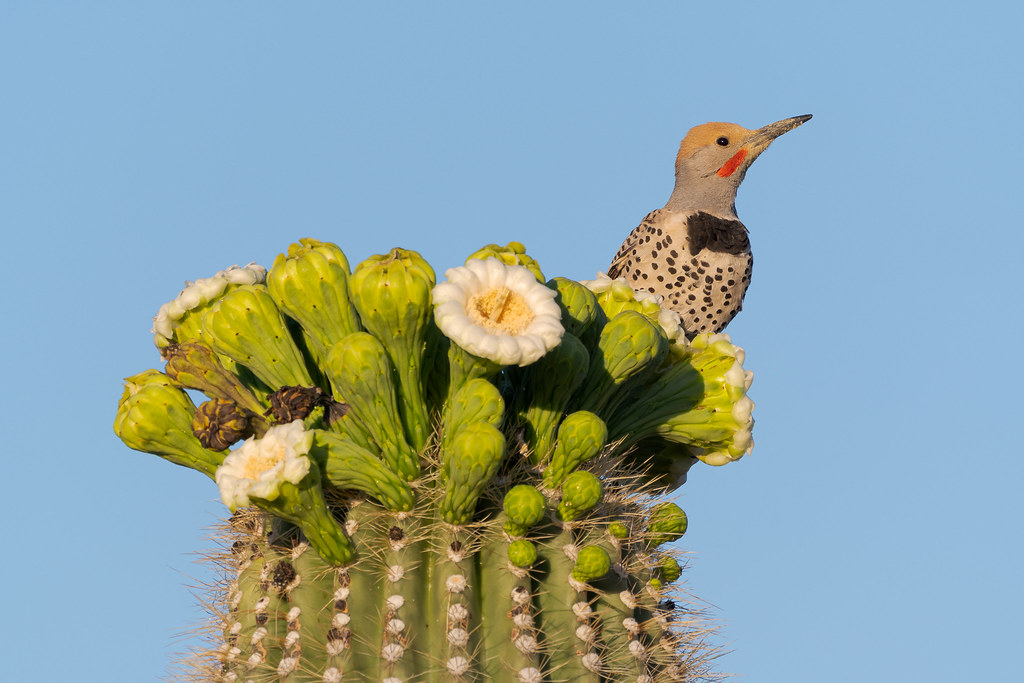 A gilded flicker shows off his red mustache as he pauses during a saguaro breakfast, his face and bill dusted in pollen. We had a similar flicker in Oregon, Emma always let me know when one came into the backyard as they were favorites of ours. 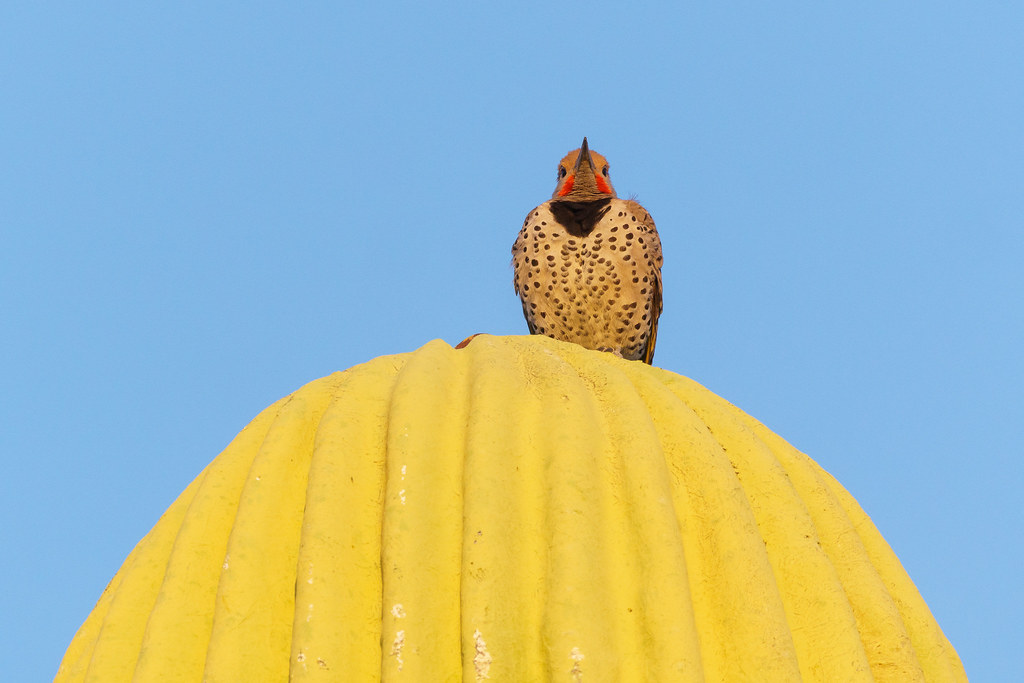 Gilded flickers make their homes in saguaros but not metal ones. Nevertheless a cell tower disguised as a cactus is a good place to let the world know what an amazing drummer you are! From sunrise yesterday on a walk in the neighborhood, since I still have to go to work most days I decided to stay off the trails to minimize risk of virus exposure. 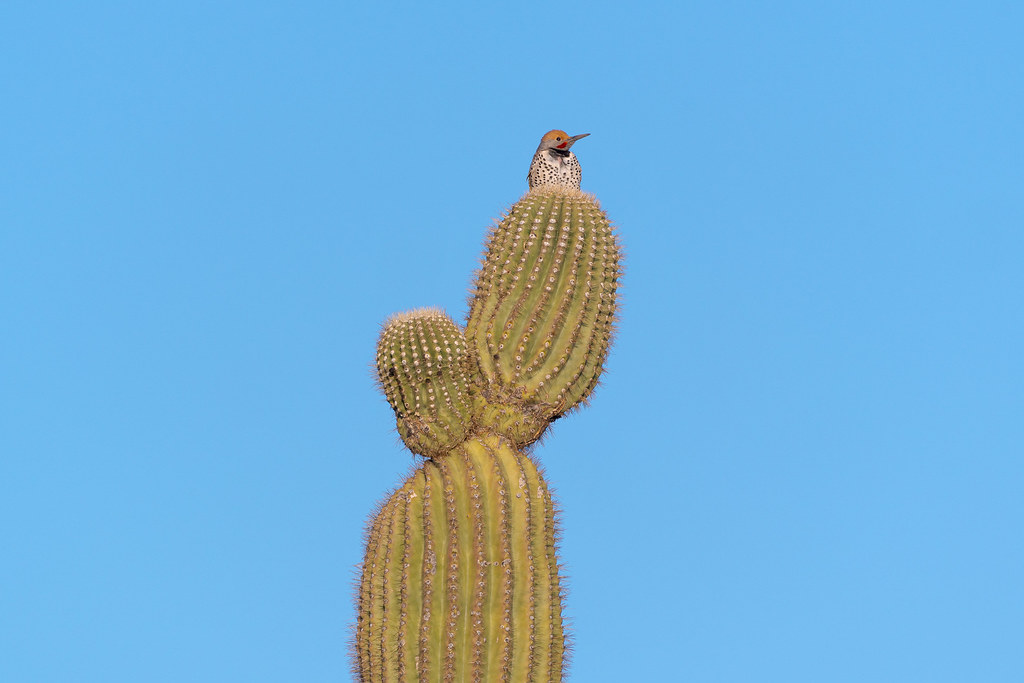 I wouldn’t describe flickers as quiet birds though it seemed so relative to the pairs of wrens and thrashers and Gila woodpeckers that were making a ruckus around him on a winter’s morning. As I watched him watch the others he reminded me of a driver atop a massive vehicle and I wished the saguaros could slowly shuffle across the desert, so that where you found the old giants would depend on where the birds last parked them.