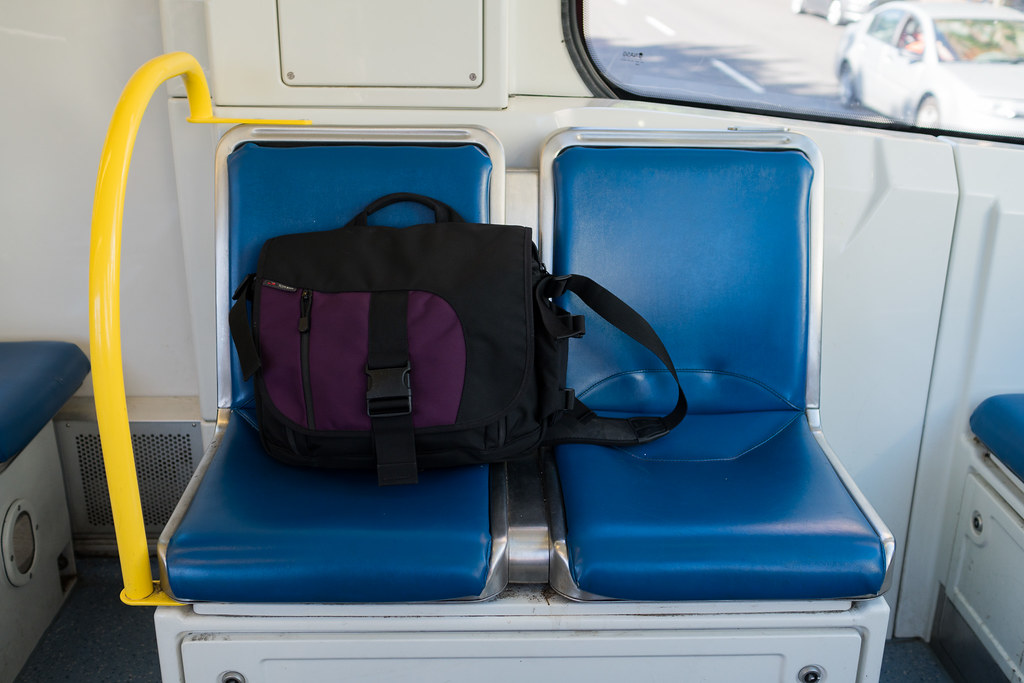 Leaving Portland means leaving a way of life. In our old neighborhood of Irvington I can walk to shops and restaurants. For most of our years here I’ve slung my Tom Bihn laptop bag over my shoulder and walked to the light rail station to take the train to work. I only drive about 1000 to 3000 miles a year, depending on how many long hiking trips I take, so I’ll drive as many miles on our way to Arizona as I might do in a year. It was obvious on my interview trip that life in Arizona will be centered around the car, so I’m going to have to get used to driving to work again. One of the things I’ll figure out during the year we’re renting is how long of a commute I can tolerate, which will dictate what neighborhoods we will consider when it is time to buy.

There is more about Portland I’ve loved, from its progressive ideals (if not always progressive policies) to its eccentricities, such as the day I met someone walking a pig at the dog park. Not a little pot-belled pig, a full-grown pig. People practicing Shakespeare in the park, even our little Irving park. The old neighborhoods. The light rail. The downtown. The city parks. The duck ponds with not just mallards and Canada geese but wood ducks, bufflehead, wigeon, scaup. On and on.

The ever-worsening traffic I won’t miss but we are heading to a much larger city so perhaps we will trade one type of traffic for another. Neither will I miss the ice storms, we’ll see if the misery of desert summers are a fair trade for wonder of desert winters.

It was the lure of Portland that led me to interview with the company where I worked for two decades, the loss of that job is forcing me to leave. I will always treasure our time in Portland, it’s been a wonderful place to call home. Goodbye, I love you. 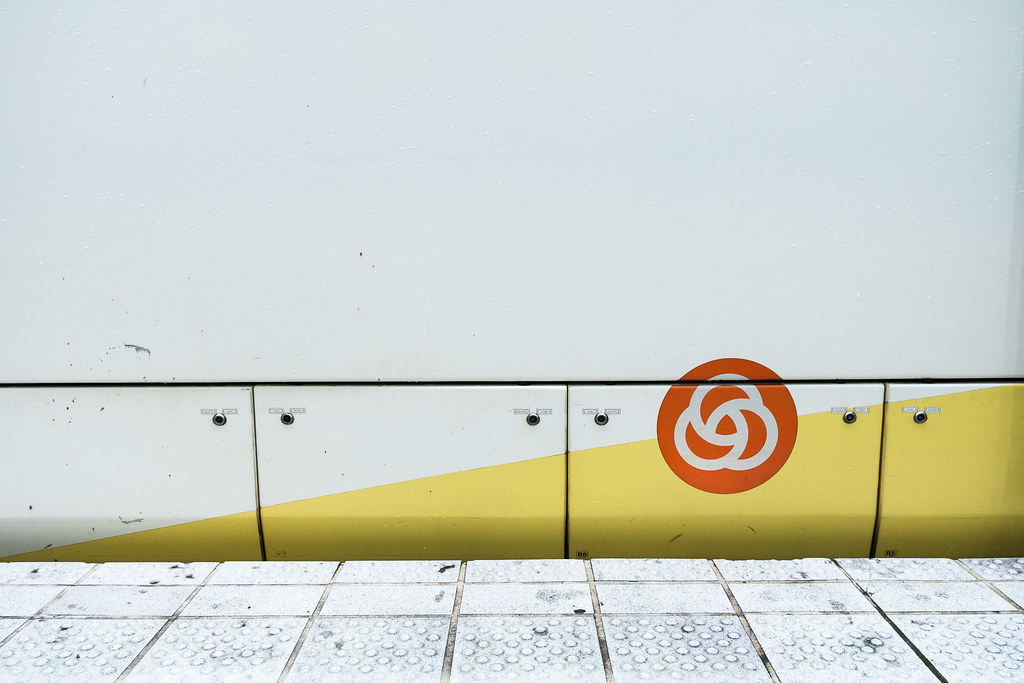 While waiting for the Blue Line on my way to work on a rainy day in the middle of October, I took some pictures of a Red Line train that pulled into the station. Two weeks later my entire team got laid off, and even if I can find a job in the Portland area it’s most likely I’ll have to drive to get there. It took me a while to edit these pictures as it made me sad to look at them, knowing my time on the MAX is likely over. I rode the trains the majority of the fifteen years we’ve lived in Portland, and while it wasn’t always a happy relationship during stretches when the service wasn’t reliable, in general it took a lot of stress out of my daily commute. 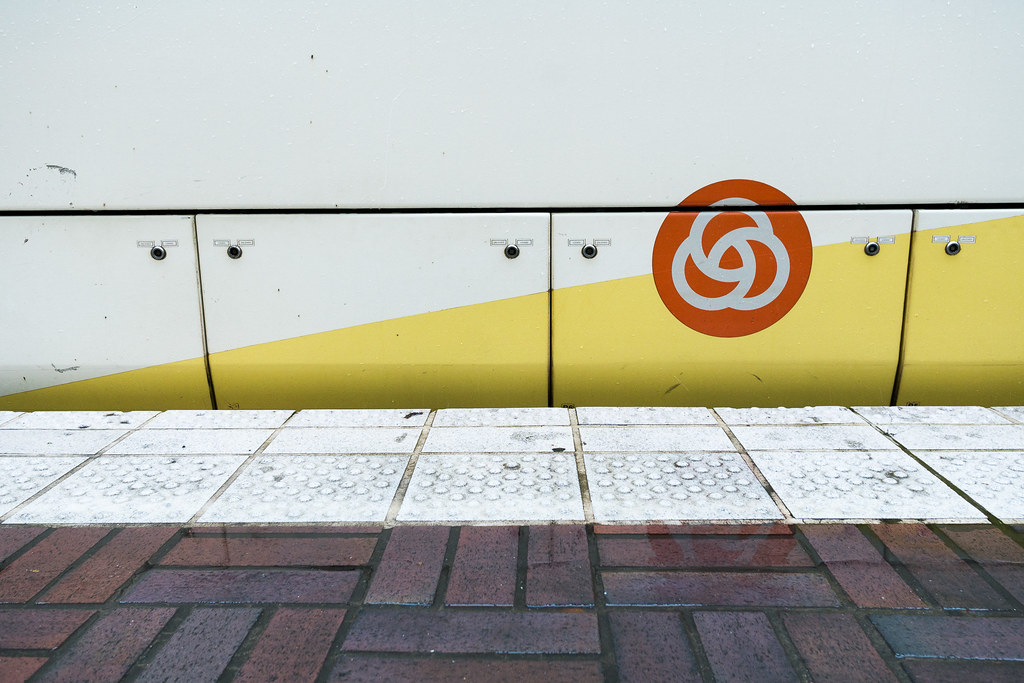 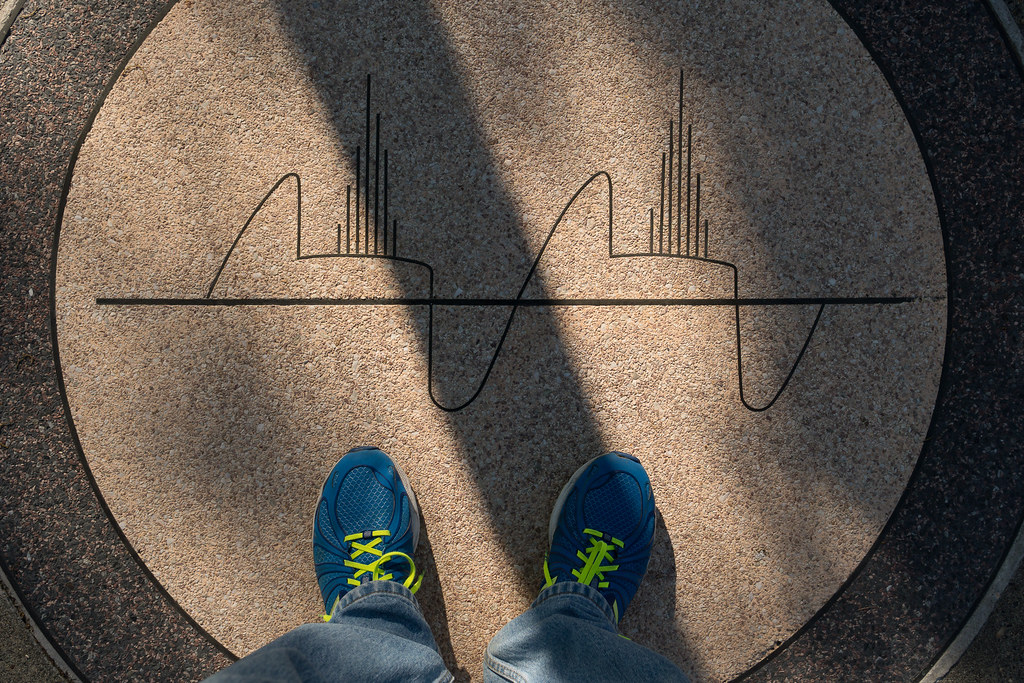 Years ago TriMet started the Westside MAX Public Art Program to install art at the MAX light rail stations on the Blue Line’s west side and I’d like to take a moment to celebrate the art at my stop near work, Millikan Way, where the art reflects technology and nature. Millikan Way is named after a famous scientist like many of the area streets, in this case for Nobel prize winning physicist Robert Millikan who measured the charge of an electron. I included my shoes in most of these pictures since I spend about a third of my commute walking and the other two-thirds on the train. This shot of some signal artwork shows off an older pair of blue New Balance running shoes, I bought these several years ago during a stretch when I was driving to work instead of taking the MAX and they’re still in good enough shape that they haven’t been relegated to dog-walking status. I tend to wear the other shoes in this post more often when I’m walking instead of driving, leading to their long life. 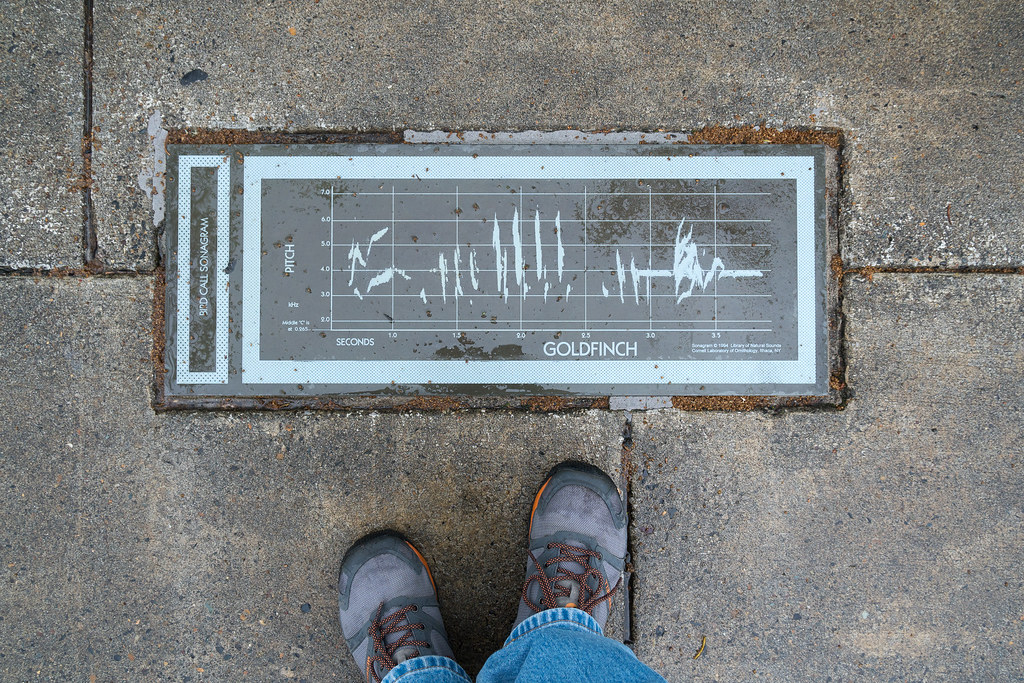 My favorite art pieces are the many bronze plaques containing sonograms of songs of local birds, plots showing the different frequencies the birds make over time as they sing their song. I especially like this art as it combines two important parts of my life, you probably know my love for wildlife if you’ve spent much time here, but you wouldn’t know I’ve spent most of the past twenty years of my work life working with signals in the frequency and time domain. The equipment we design (like my last project or the one before it) is usually used in very different applications, like analyzing wireless communications or radar systems, and at much higher frequencies and bandwidths than birdsong, and with many different types of plots, yet many of the fundamental principles are the same. This sonogram is for the American goldfinch, I took the picture on a day when it poured rain, which is why I’m wearing my waterproof Merrell shoes. Like my orange running shoes, this is a pair I wish I had bought a handful of once I realized how much I liked them. They are great for keeping my feet dry when I have to walk through puddles but are still quite breathable, they’re wet in the picture but my feet were not. 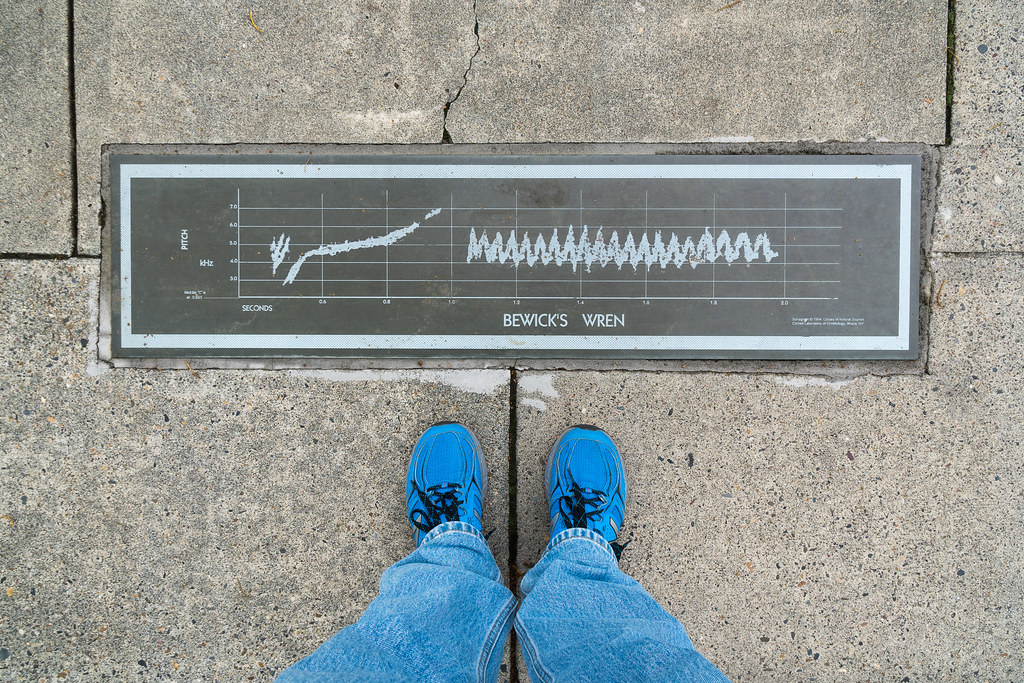 This sonogram is for the little Bewick’s wren, you can see how different it is from the goldfinch, especially the trill at the end where the song bounces between two frequencies. Birds have multiple vocalizations even though only one is shown in the plaques for each bird, and the songs can change with geography so that a bird on the east coast may have a different song from a similar bird in our area, but you can get a sense of how varied the songs are from one species to the next. The shoes are my blue New Balance trail running shoes that are the newer version of my beloved black shoes that finally fell apart, and are a favorite for days when it might rain some but not enough that I want to risk wearing out the more expensive waterproof shoes. These are my favorite shoes and the only thing keeping me from wearing them every day is that they weren’t available in brighter colors, although I do love this color of blue. 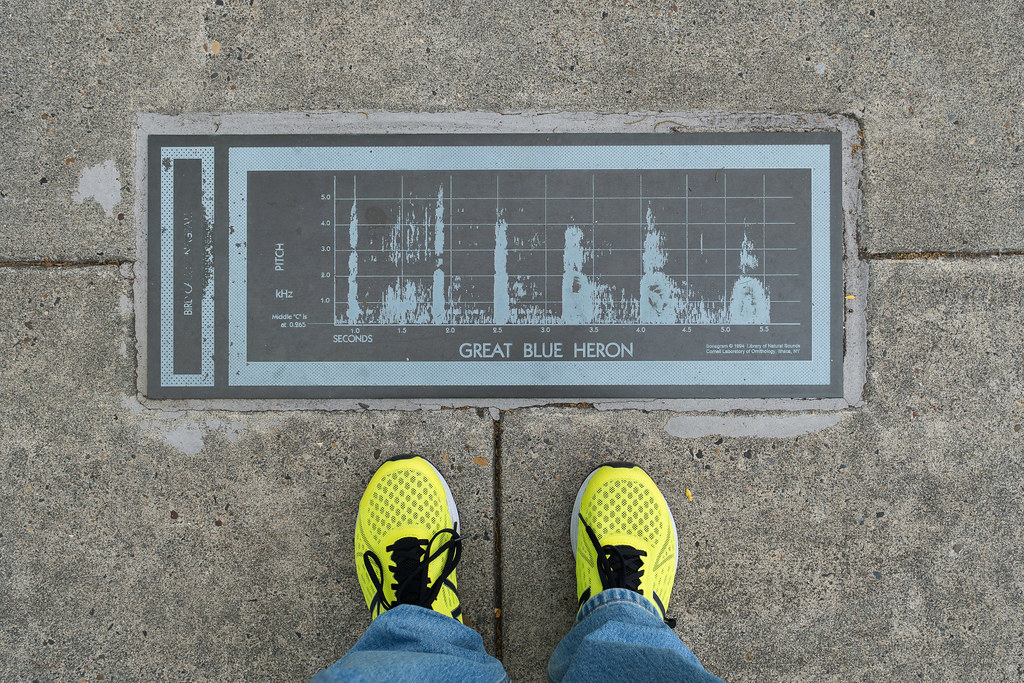 This sonogram is for the great blue heron, full of lots of frequencies and not exactly the prettiest of songs. They’re squawkers, the herons. Shown too are my new yellow New Balance sneaks which replaced the orange ones which were wearing out, I wear them on dry days to make me more visible, plus I love colors. I don’t wear them on wet days as if they get dirty they’ll lose some of that eye-catching color. A clever photographer would have photographed his yellow shoes with the yellow goldfinch and his blue shoes with the blue heron, but you’re stuck with me. 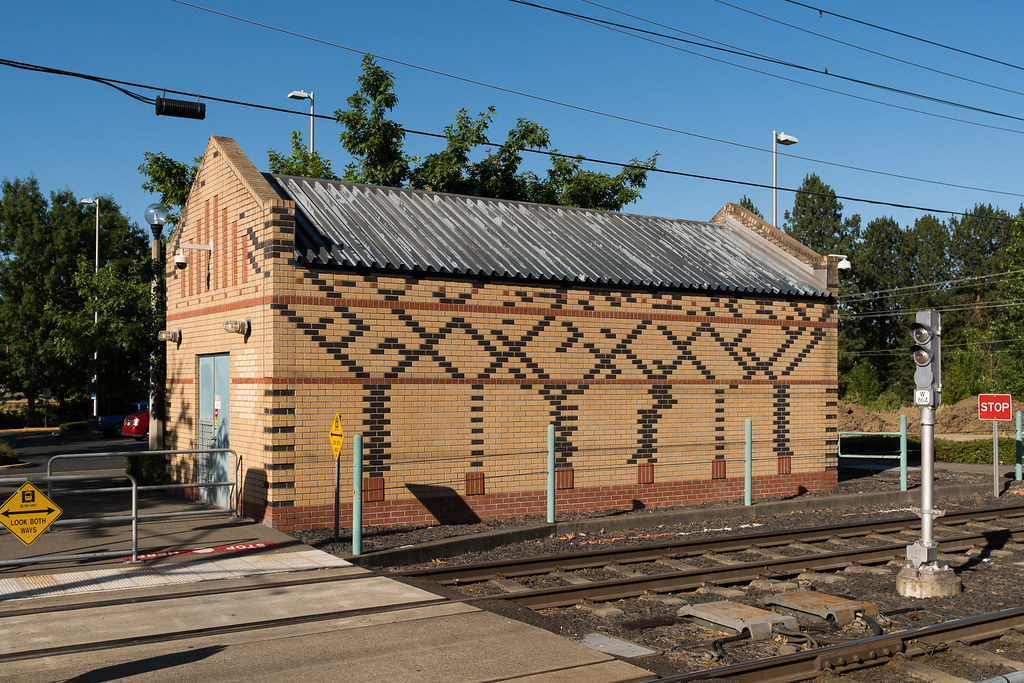 Even the utility building gets in on the art action, with brick patterns suggesting trees of the small wetland behind. There’s a little creek that runs past the other side of the parking lot that I walk over to get to work, and while it’s not the prettiest thing, I do see beavers in there at times (I believe they live at the nearby Nike campus). Occasionally a muskrat too, but nutria are much more common as is true of many of Oregon’s waterways. And a few varieties of ducks, and the occasional great blue heron too. 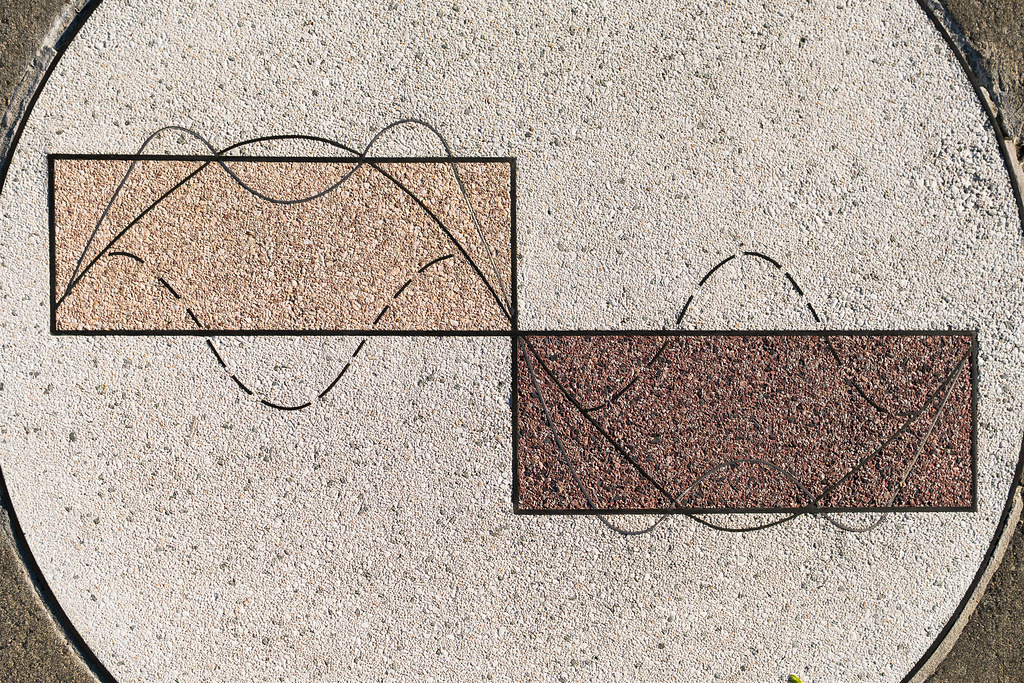 There are lots of other little art pieces around, from mathematical symbols to pine cones and leaves and the like. I love that TriMet did this and over the years I’ve thought about getting off at each stop on my commute to take pictures as the art varies from station to station, but so far I’ve only done it for the stop where I normally get off. I do have a small camera now that would be perfect for the task, but I’m eager to either get to work or get home to the pup who is waiting for her walk. 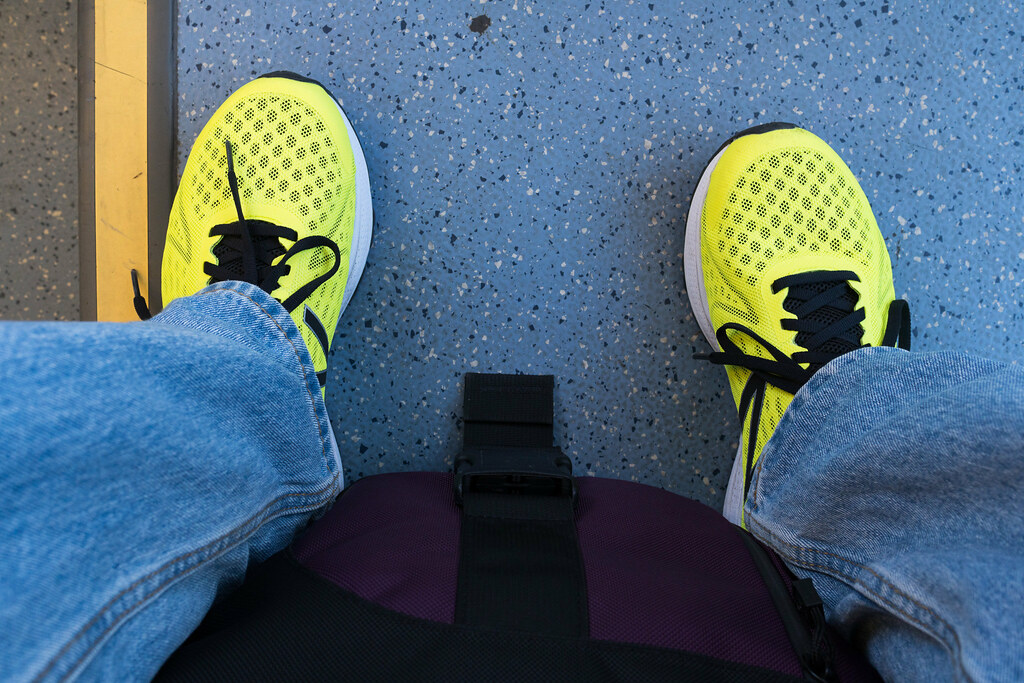 Continuing on the yellow theme, I recently had to shift my beloved orange New Balance running shoes to dog park status as the fabric was starting to tear. I like having bright shoes to make me more visible as I walk to and from the train so I replaced them straightaway with a pair of bright yellow sneakers, as this seems to be their current bright color of choice. Sitting between my feet is my Tom Bihn ID messenger bag with its lovely aubergine front, keeping my MacBook and iPad safe and secure as I ride the MAX to work.