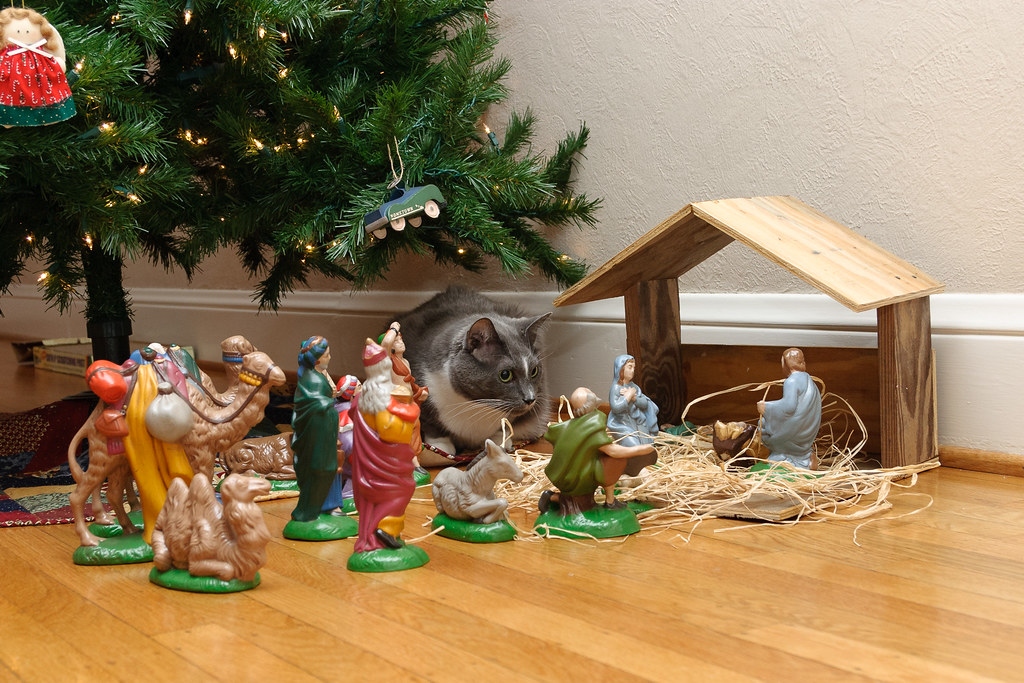 Today’s been an emotional roller coaster. When I awoke from the comfort of sleep this morning, I thought I was going to be OK. And I was for a while, but as the day wore on Templeton’s absence was too hard to ignore — Christmas was one of his favorite times.

I put up the Christmas tree yesterday, and that was the first time I realized something was wrong with Templeton. He loved the tree and the big box it came in, and when he didn’t come upstairs while I assembled it, I went down to get him. He wasn’t interested in the tree and was all hunched over when he walked — we left for the vet a little while later. In the space of a few hours I went from thinking he was fine to holding him as he died.

Normally when I’m upset I like to snuggle up with Templeton — he loved to snuggle and would emit this wonderful purr that helped me relax. He was just so happy when he was with the ones he loved. I wish I could do that now.

I’m working on a novel in which the pets of my life are the major characters — Templeton of course is one of the main characters in the first story. One of the joys of writing is that these characters have lived in my head for the past couple of years, a mixture of the pets in real life and the characters from the story, and thinking about them has helped me when I’m down. One of the central themes of the story is dealing with loss, so they have come in useful over the past year.

Those voices have been silenced temporarily, as the present loss overwhelms my thoughts, but in the long term I know they will return. One of the characters is based on a dog named Ginger that we had when I was in college but who died very young, it’s been a joy to have her character from the book bring that lovely little dog back into remembrance on a daily basis.

I know someday soon the same will be true for Templeton, but for now it is time to grieve.

Yesterday’s picture was from January 2001 when we lived in Keizer, Templeton was playing with one of his catnip bags and took a momentary break. I had just gotten my first digital camera the week before at Christmas, so it’s one of my earliest digital pictures.

Today’s picture is from December 2004 and taken at our house here in Portland, he’s watching the Christ child in the nativity set.