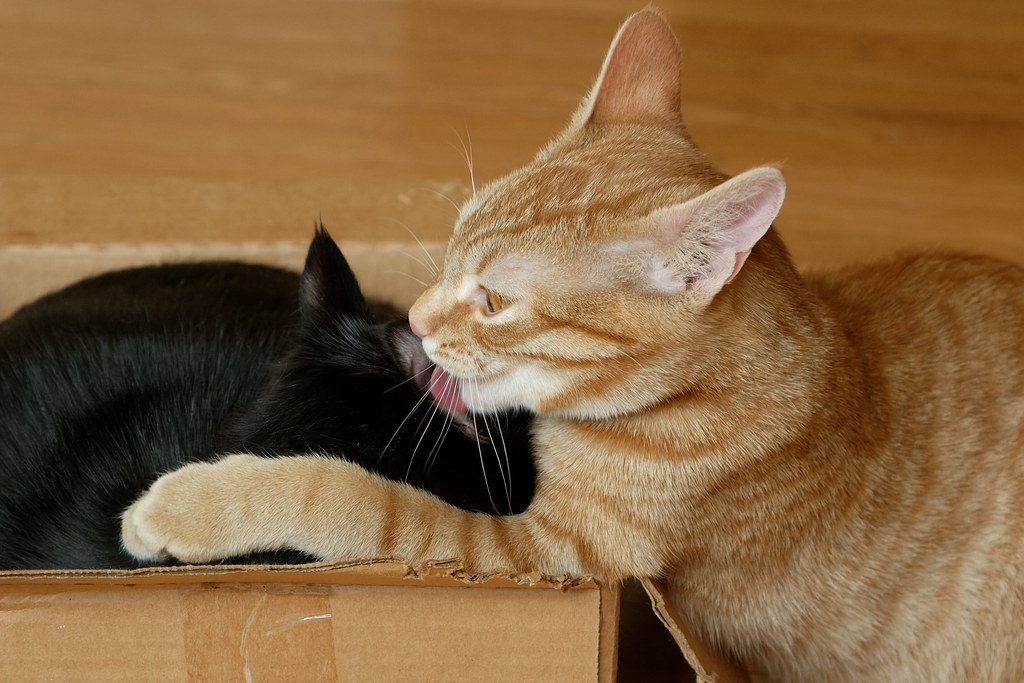 Sam and Emma have been with us long enough that their personalities are really starting to come out. It’s been fun to get to know them and see them blossom as they truly understand that they have found a home for the rest of their lives. All three cats are getting along well and in the mornings they’re usually all snuggled into bed with us. And even though I’ve been glad to see them develop their own distinct personalities, I have been amused that they each share a trait or two with our dear departed Templeton.

Emma has mellowed out a bit, she used to follow us underfoot every time we went up and down the stairs, which was good exercise for her, but I’m glad she’s comfortable enough now that she can see us leave the room and be OK with that. She won’t let me go to the bathroom without opening the door and coming in, but Templeton used to do that too. He didn’t push the door quite so wide open though, he at least left with me a shred of dignity.

Emma’s not the best groomer, something we suspected when we first brought her home. She does OK with the parts of her body she can lick directly, but the top of her head and back of her neck don’t get quite so clean. Scout is a fastidious groomer (almost too much so), but she won’t groom anyone else. Little Sam, though, appears to share another one of Templeton’s traits, in that not only is he a good groomer, but he’ll help you out too. He loves to lick your hand if he thinks it needs a cleaning, and I’ve seen him give Emma a little help too.

Today though he wasn’t bashful about it, he grabbed her head with both front paws and went to work. It all went well until he got a little rambunctious with the sleepy Emma. Emma had been sleeping in an Amazon box, one of Templeton’s favorite places to sleep. She’s been sleeping there a lot lately and doesn’t seem to mind the gray fur that lines the edges of the box from Templeton’s many hours in there, I just can’t bring myself to clean it out.

As far as greeting me at the door the way Templeton did, Emma comes the closest as she often sleeps near the door around the time I come home. I don’t know if she’s doing it on purpose or if she just likes sleeping there, but she’s usually at the door by the time I get it open. Sam follows Scout’s approach and usually comes running in from wherever he’s been sleeping.

It’s at those moments, though, that I wished God had blessed me with three arms to pet the three cats who come running up to welcome me home.