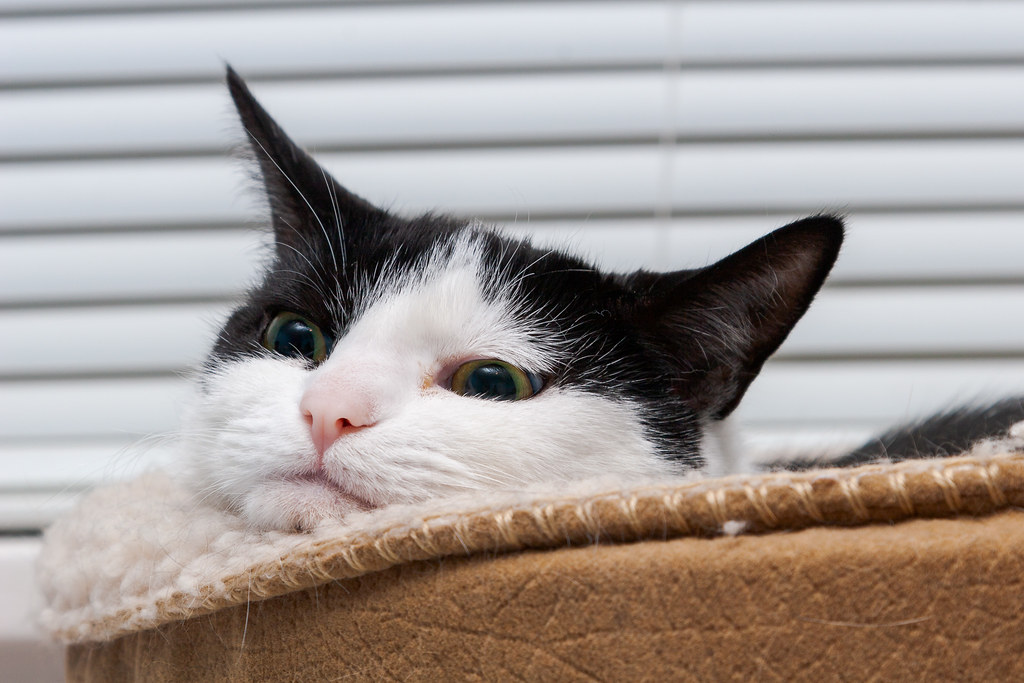 I told you the ways of Emma were spreading. Scout usually circle sleeps in the warm beds but couldn’t resist poking her head out to watch the animal circus that was milling about my office.

Her favorite game is to be chased, Templeton was always good about it but with me she has to stop periodically and wait for me to catch up before sprinting away again. In general though Scout’s more lover than fighter and prefers snuggling to roughhousing. She used to play with Templeton but just as often enjoyed watching the two of us play. Maybe her youthful companions are rubbing off on her as lately Sam and Emma aren’t the only ones enjoying a rousing game of String. It started a few weeks back with a half-hearted attempt to catch the string then suddenly Scout was all claws and motion, rolling across the hardwood with arms flailing in pursuit.

The other night I was working in my office when I heard Emma running helter skelter in the next room, tossing her furry mice across the room and then pouncing in full fury. I got up to watch her and was surprised to see her sleeping in one of the warm beds. I crept into the hallway and peered around the corner and witnessed Scout in zealous fervor waging war on the infidels. Over the weekend she joined Sam and I in a game of mouse-on-a-wire, she’s watched us many a time but this was her first time leaving the sidelines and joining the fray.

And I’ve noticed a few times lately a cat cabal cruising the midnight hours with Scout on point. But her admirers aren’t limited to the likes of cats and men. The other night when I crawled into bed, our dog Ellie curled up against my legs and laid her head across my knees. When Scout took her usual spot on my chest, Ellie crept up in the darkness and laid her head beside Scout. It was such a sweet moment that I lay awake for a while listening to them breathing inches apart. I slowly drifted into sleep until I woke when Scout hopped off me and ran off to play with Sam. My feelings were only slightly hurt when Ellie immediately inched back down and lay across my knees.

It’s hard to compete with the Queen of Scoutland.