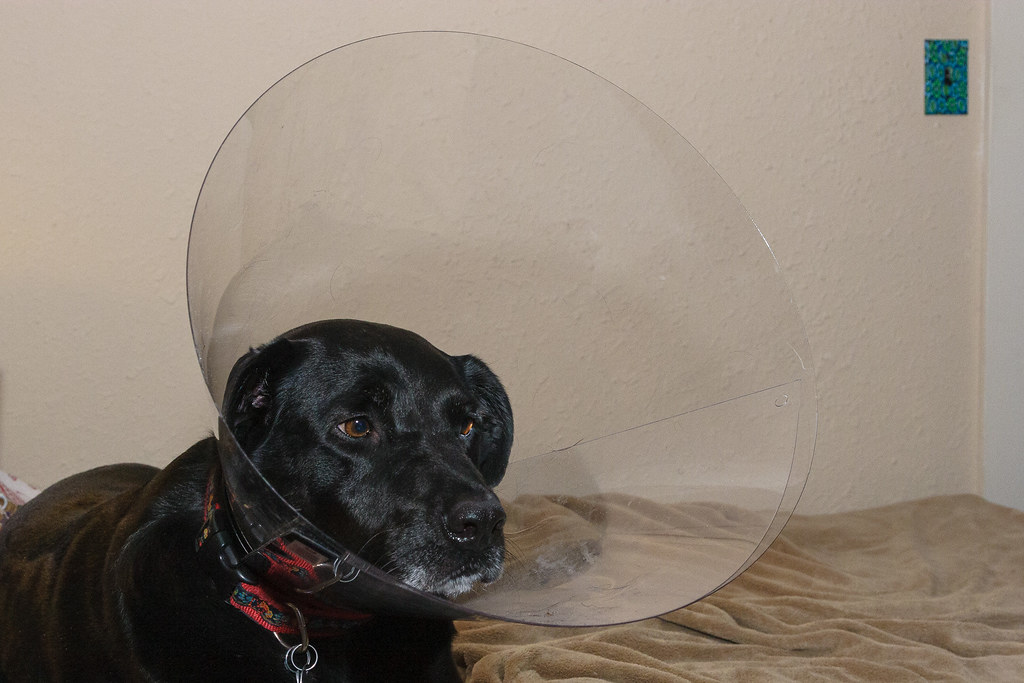 The riverdog came tumbling down,
Now a cone adorns her crown.

Ellie’s training has advanced far enough that this summer I’ve been letting her off-leash in appropriate areas. One of our favorite things to do is to head to nearby Kelley Point Park, where the Willamette River gently flows into the Columbia. There are a number of places along the trail with beach access, so Ellie can (dog) paddle the rivers that Lewis & Clark once paddled.

The last few visits I’ve brought a tennis ball and our riverdog just loves to chase it, either in the shallow water next to the beach or out into the deeper water where she can swim. We weren’t able to go a week ago because of a Hempfest (she’s already got a permanent case of the munchies), but this past Sunday we took advantage of the lovely afternoon for another visit. After about an hour of play, she came up limp so I decided it was a good time to head home. She does this whenever her foot lands on something unexpected so I wasn’t concerned, she was soon walking normally on the path back to the car and played vigorously in the evening.

By morning however she was limping noticeably and constantly licking her paw. My wife took her to the vet and it looks like she may have rather painfully sprained her ankle, she’s on painkillers and has to wear this cone to keep her from licking the troublesome paw.

Ellie joins some fine company of pets in cones, Templeton wore a similar hard plastic one while Emma’s was flexible cloth. This picture exaggerates the size of the cone, it doesn’t stick out much farther than her nose, but it reminded me of a radio transmitter, sending out Radio Free Ellie on all channels.