I thought that when we adopted our dog Ellie in 2009 it would be our most difficult introduction, as our three cats were not used to dogs, but it turned out to be our easiest. Our toughest would be in July of 2013 when we adopted a shy little kitten we named Boo. When we met he was so terrified he literally shook so we took his introduction to the other pets even slower than normal, keeping him isolated for a couple of weeks, then slowly allowing him more and more time in the house at large.

With the slow introduction Boo gained confidence each day, which was fortunate, as we fell in love with the little black-and-white cat rather quickly. But one hurdle remained: Emma. 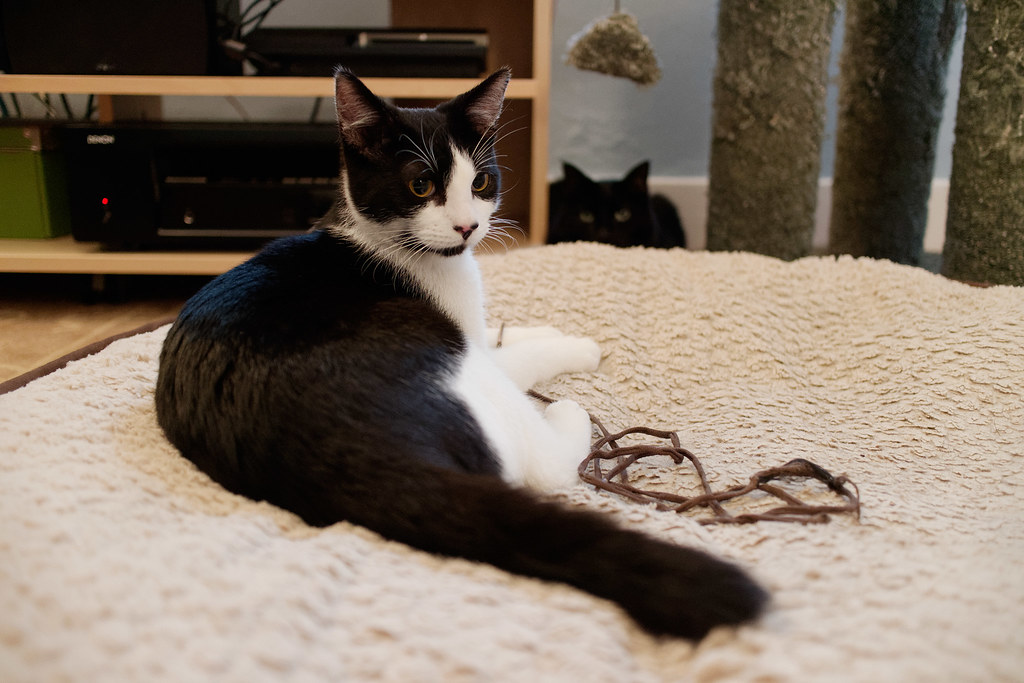 I spent most of that first month with Emma while my wife was with Boo, as Em was not happy with the arrival of the little fellow. Em had become my little buddy after Scout died early in the year and that bond helped when we started giving Boo short stints in the house at large. She’d follow him around everywhere he went, staring him down, and hissing if he got too close. You can see her in the background of the picture above, watching Boo from the base of the cat tree, while he plays with one of her beloved strings. 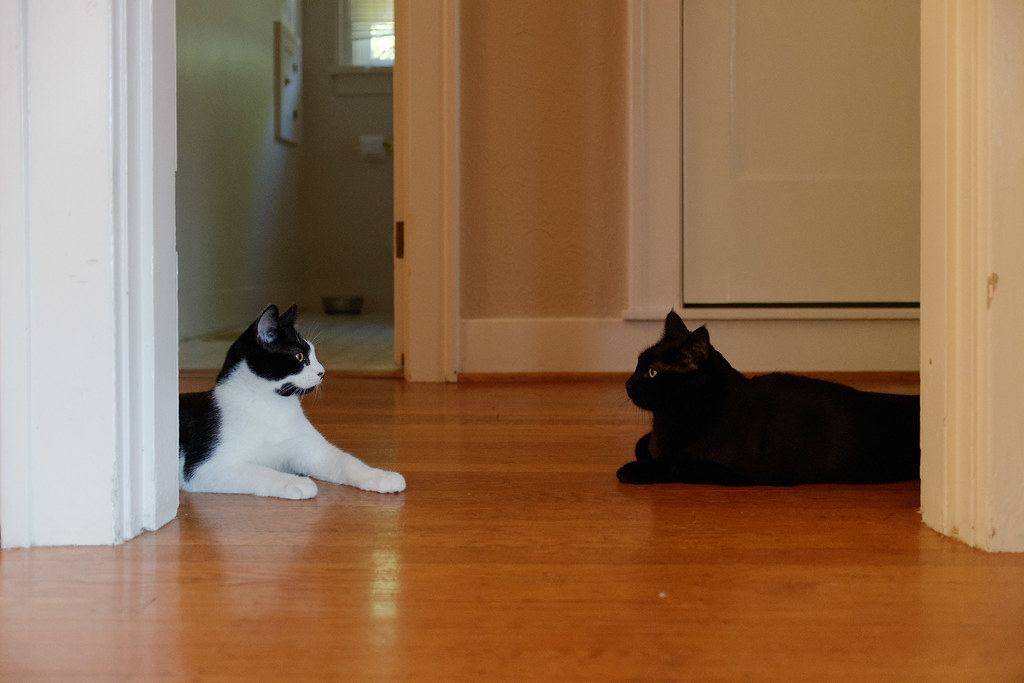 We’d let Boo out until you could see on his face that he was getting a little overwhelmed, and then we’d take him back into his secluded room where he felt safe and then Emma (and to a lesser extent Sam) could feel comfortable in their space too. A few days later and she was still staring him down, while he was mostly trying to avoid eye contact, but desperate too to fit in. When it was time for Boo to go back to his room, I’d shower Emma with as much attention as she could tolerate, and she relaxed a bit more each day. 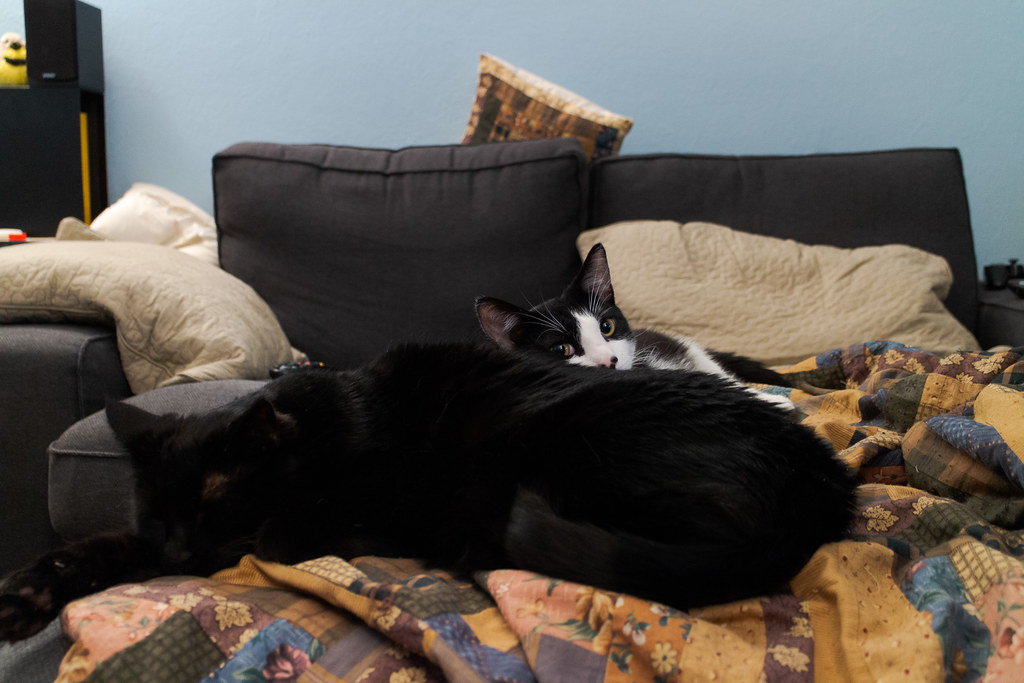 A few days after the above staredown Boo and Emma were sleeping on my couch when Boo came in and nestled in between them, and I was delighted to see Emma not get up. By the end of August, a few weeks after Boo was given full run of the house, I came into my office and saw Boo using Emma as a pillow. She had long let Sam do this but it was a first for the brave little Boo (I apologize for cutting off her foot at the edge of the frame, but I was shooting quickly while trying not to wake her). 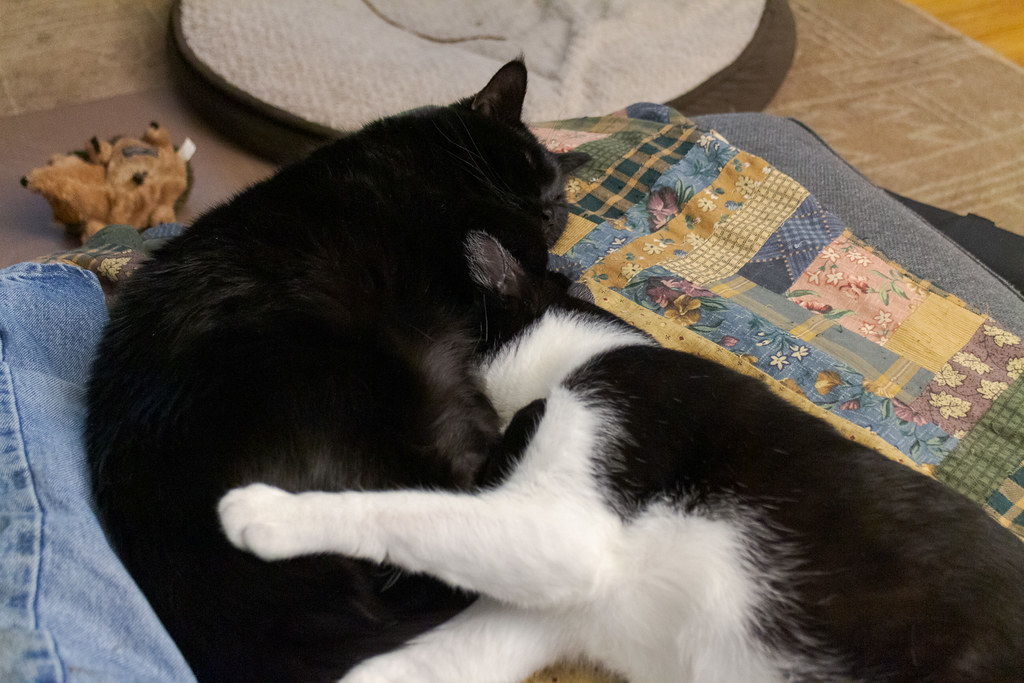 But my favorite moment of their introduction was in October when Emma had been sleeping beside my legs as she so often did. Boo came in and at first just curled up beside her, then he got a little more bold and put his head on her. But I was startled when he suddenly put his arms around her and just buried his head in her stomach. This woke her up and I was sure she was going to get up and go into the other room, but instead she stretched her arms down his back and cradled him. He turned his head for a little air and she spooned him and they fell asleep together.

That was our Em.