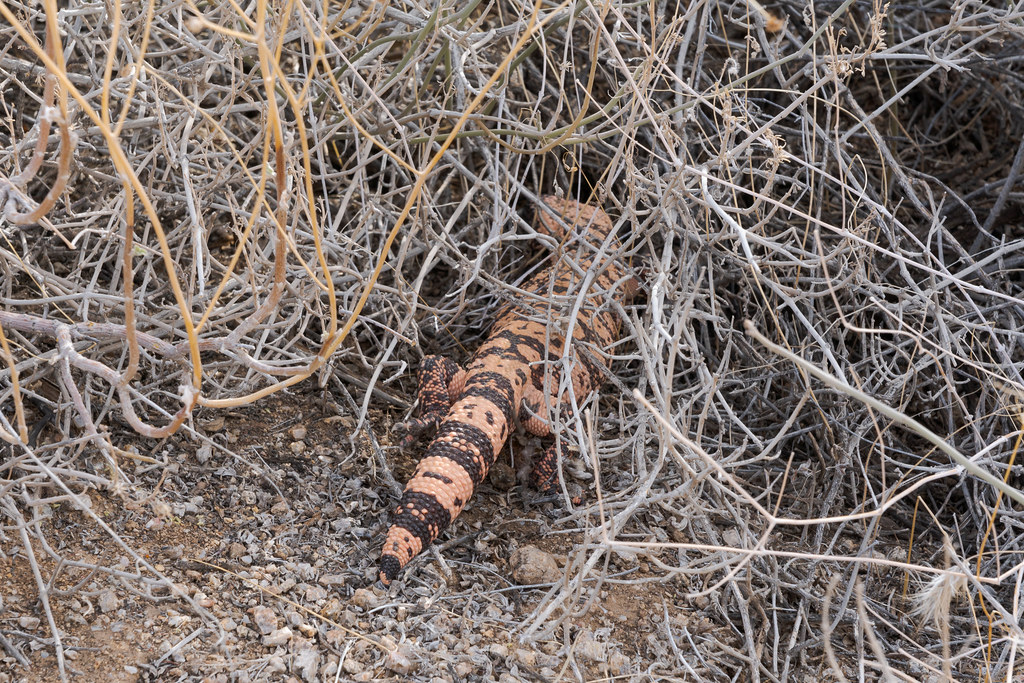 I hesitate to post this as not only is it not a good picture but you’re only seeing the tail end (ahem) of a brief encounter Saturday morning. But this brief encounter already joins my pantheon of favorite hiking moments, as the one creature I wanted to see in Arizona above all others, but the one I knew was rare to see, was the Gila monster. I arrived at Brown’s Ranch before sunrise Saturday morning as I have many times the past couple of months, this section of McDowell Sonoran Preserve has been the place I’ve visited most frequently. I hoped to photograph Gambel’s quail up on the saguaros in the lovely morning light but I found something unexpected when I arrived at the trailhead: clouds.

I’m used to clouds. I’m from Oregon. But I’ve gotten so used to blue skies here in the desert that I’ve only been checking temperatures before I hike, not cloud cover. The clouds were thick (for Arizona, not for Oregon), thick enough to snuff out the morning light, and that meant a change of plans. Instead of looking for wildlife along familiar trails, I immediately headed out eastward on the Chuckwagon Trail. I had hiked it the week before with the sun in my eyes so I took advantage of the cloud cover to shoot patterns in the plants and rocks along the trail and had a grand time.

I wasn’t seeing much wildlife, not even a lizard, and jokingly thought to myself that I hadn’t been in Arizona long enough to know who to complain to about that. I hiked further on the trails this time, up to Cathedral Rock, and turned around to try some different trails on the route back. I packed up my telephoto lens as the sun was getting a bit bright, swapped my tripod for my hiking poles, and set off to explore.

I didn’t make it very far. There it was crossing the trail in front of me, one of the most beautiful creatures I’ve ever seen, this Gila monster. As slowly as it walked – walked? waddled would be a better term – and as colorful as it was, it soon disappeared into the desert brush. I grabbed my little Sony out of my camera bag and got a quick picture before it was gone from sight, but there was no time to set the focus on its head. Then it was gone.

We only shared a few seconds together but I’ll remember those seconds for a lifetime. I returned to Brown’s Ranch this morning but the clouds did not. I found my quail on a saguaro, and more besides. The desert is full of wonders, but this wonder, this monster, I hope to meet again. 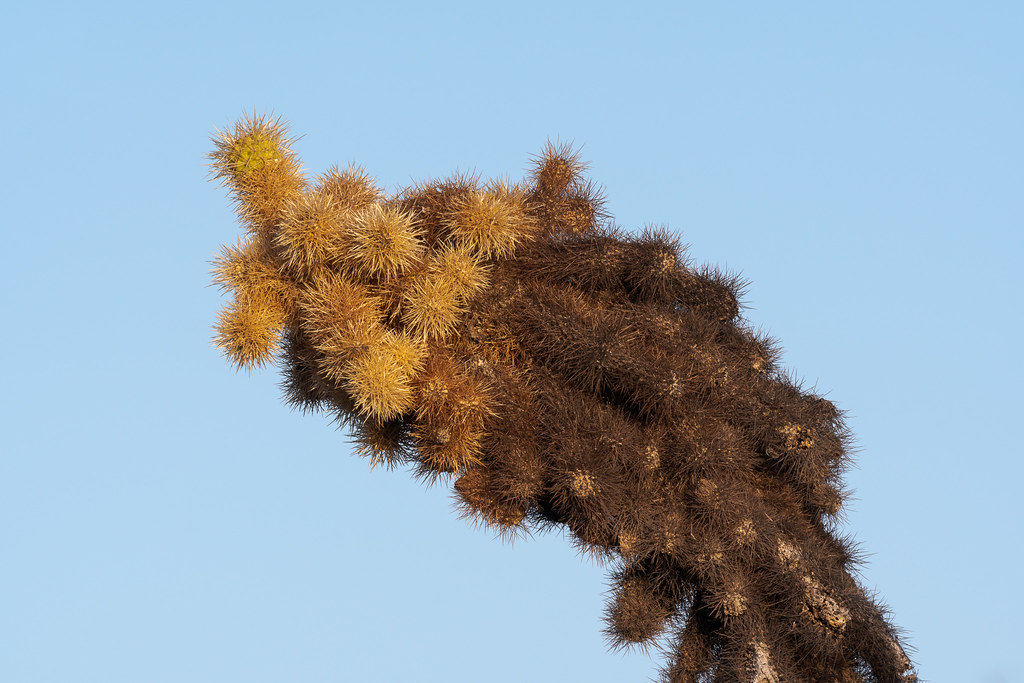 I didn’t expect to see a humpback breach the surface of the water, not in the middle of the desert, but there it was and so it was, my desert whale. 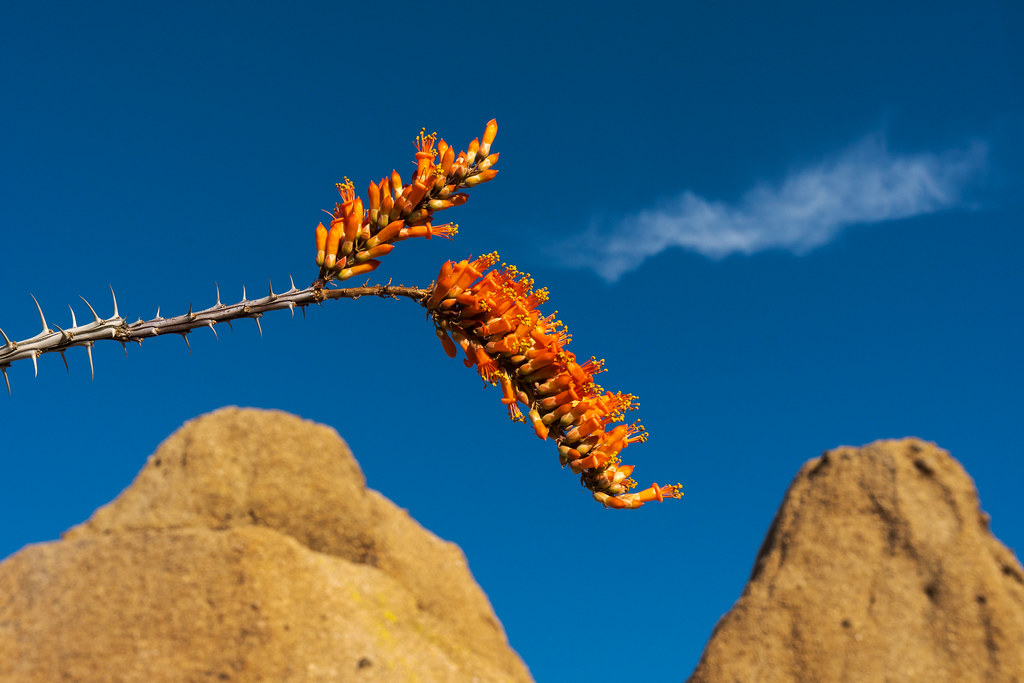 Having a little fun with a beautiful blooming ocotillo and a wispy cloud on an early spring morning in Pinnacle Peak Park. 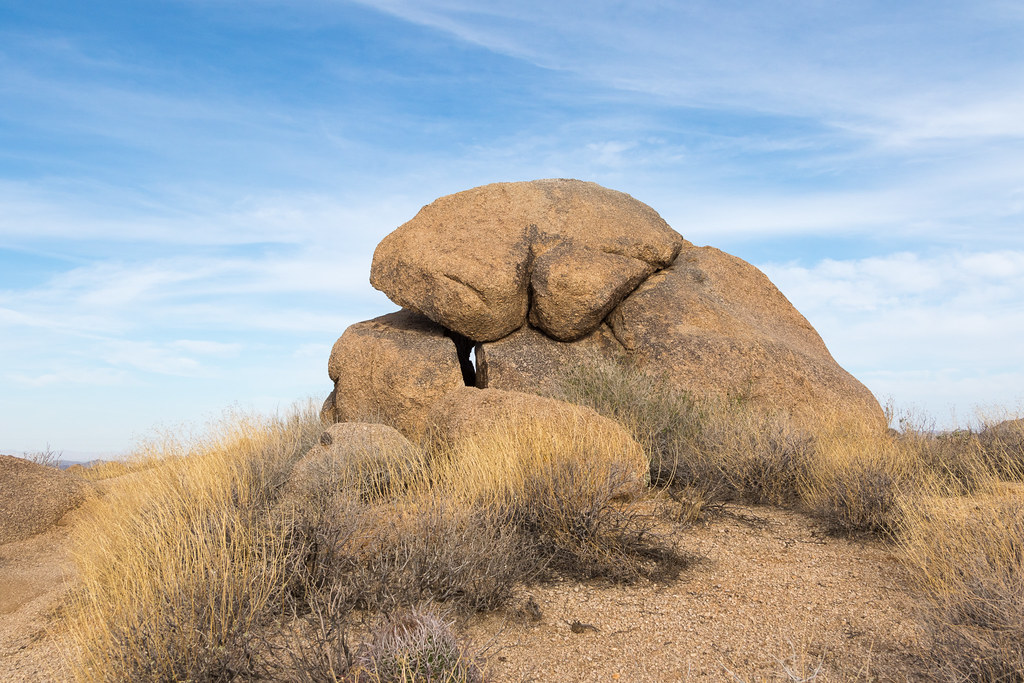 The Brown’s Ranch section of McDowell Sonoran Preserve has quickly become one of my favorite local places to hike. It’s far too soon to say if it will become my Ridgefield – the default place I go when I want to go out – but it has been a great place to explore and learn about the desert in the spring. I’m assuming it was named after someone named Brown and not because everything is brown, though both would be apt. 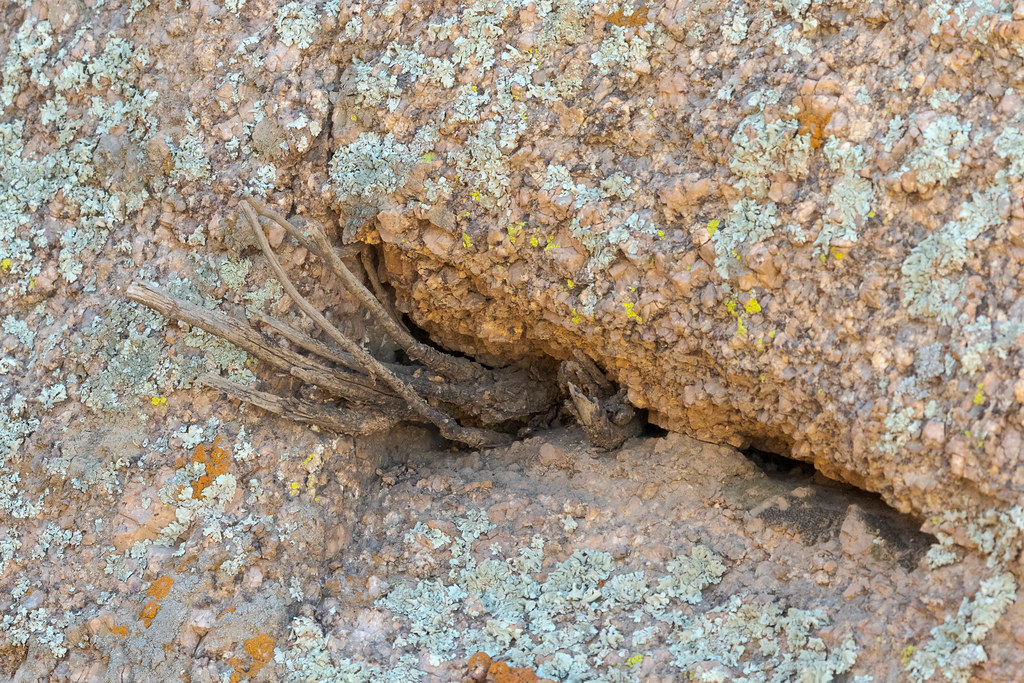 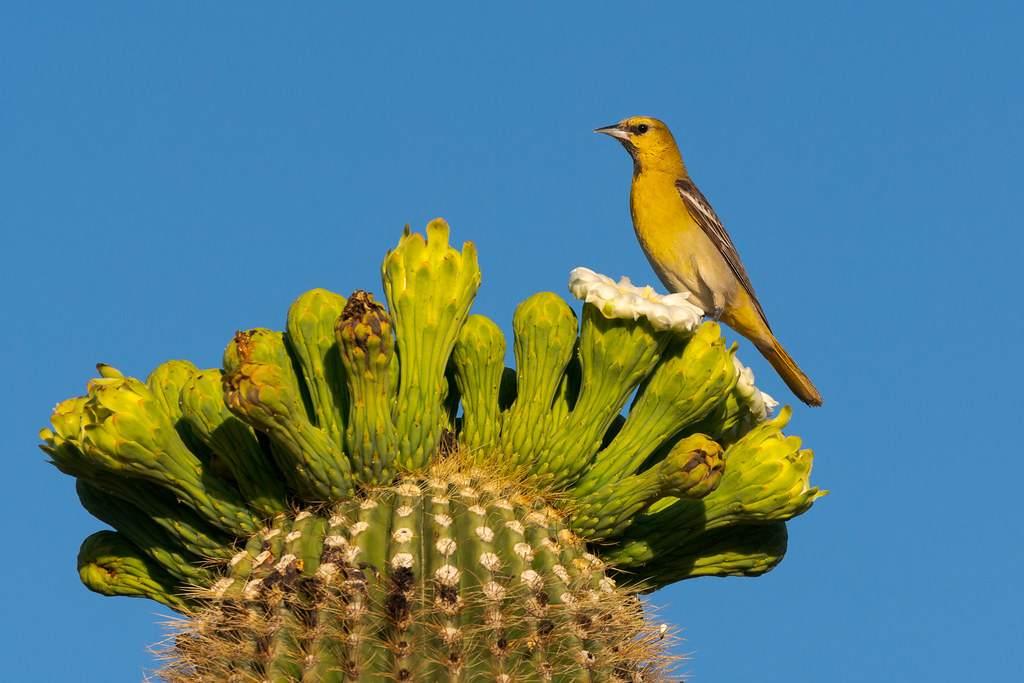 In my short time here there are a handful of birds I’ve gotten used to seeing on the saguaros: Gila woodpeckers, gilded flickers, house finches, cactus wrens, and curve-billed thrashers. But I sometimes see more than the usual suspects, such as this splash of color that momentarily swooped into view early Saturday morning. He’s a young Bullock’s oriole, he’ll be even more colorful and vibrant in a year. I’ve only see this species a couple of times before, both during my years in Portland, so here’s hoping we meet more often in Arizona. 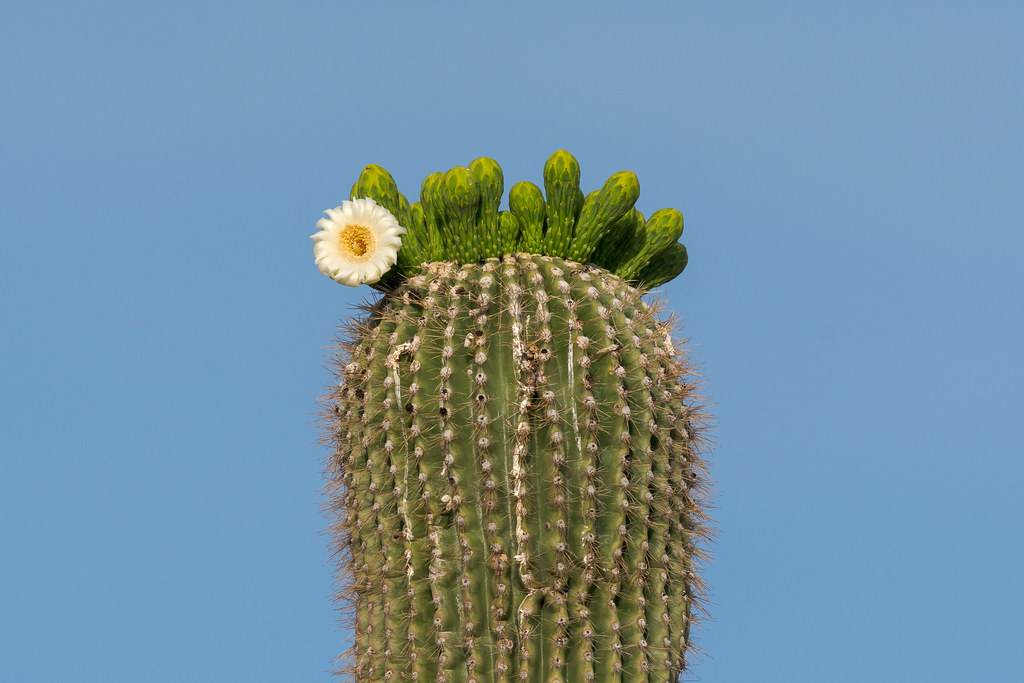 A saguaro blossom is the first of its group to flower. 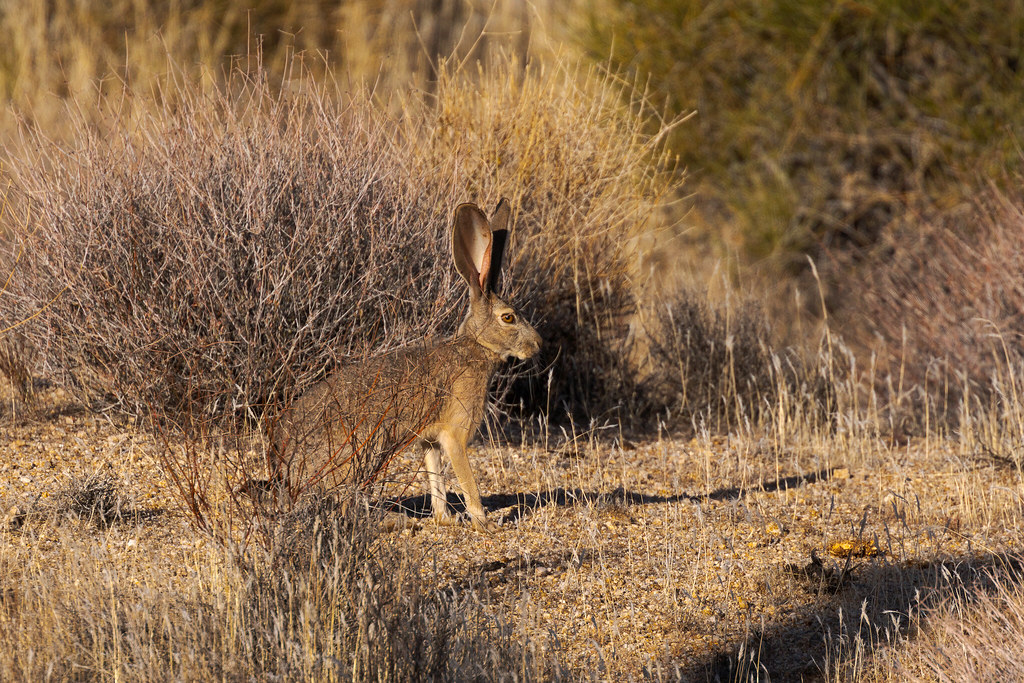 As we make our home in the desert it is painfully clear to me as I hike, suited up with bottles of water and protective sun gear, that I will never be at home in the desert, not like they are, the animals who live here. This black-tailed jackrabbit can leap 5 or 10 feet at a time and reach speeds up to 40 mph, but on this morning it casually sauntered off into its desert home. 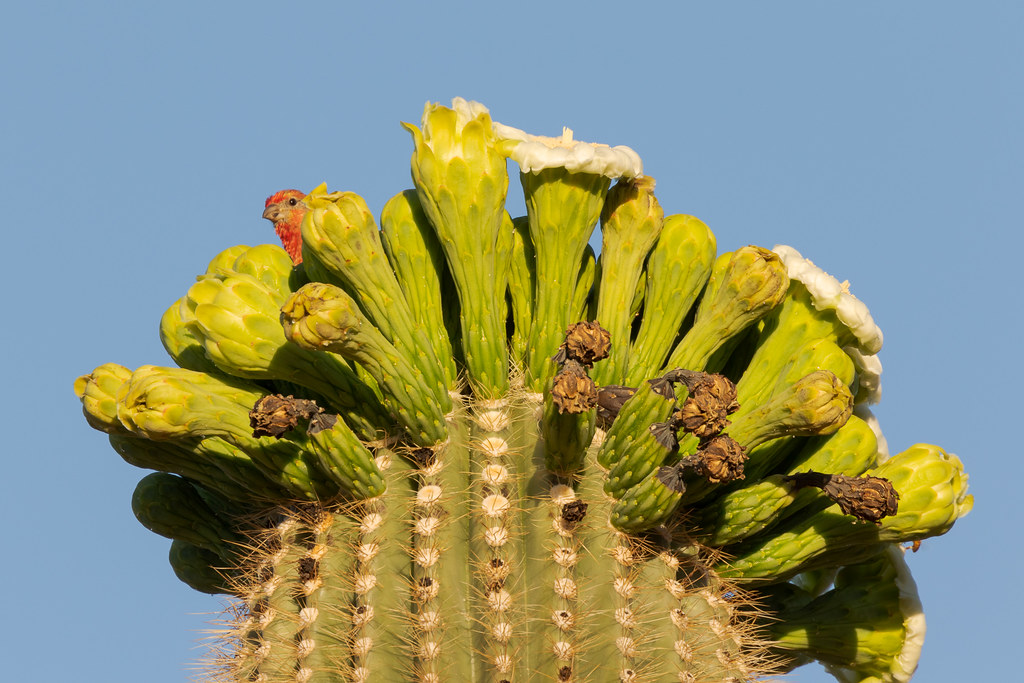 A male house finch peeks out from behind a blooming saguaro cactus in the Brown’s Ranch section of McDowell Sonoran Preserve. 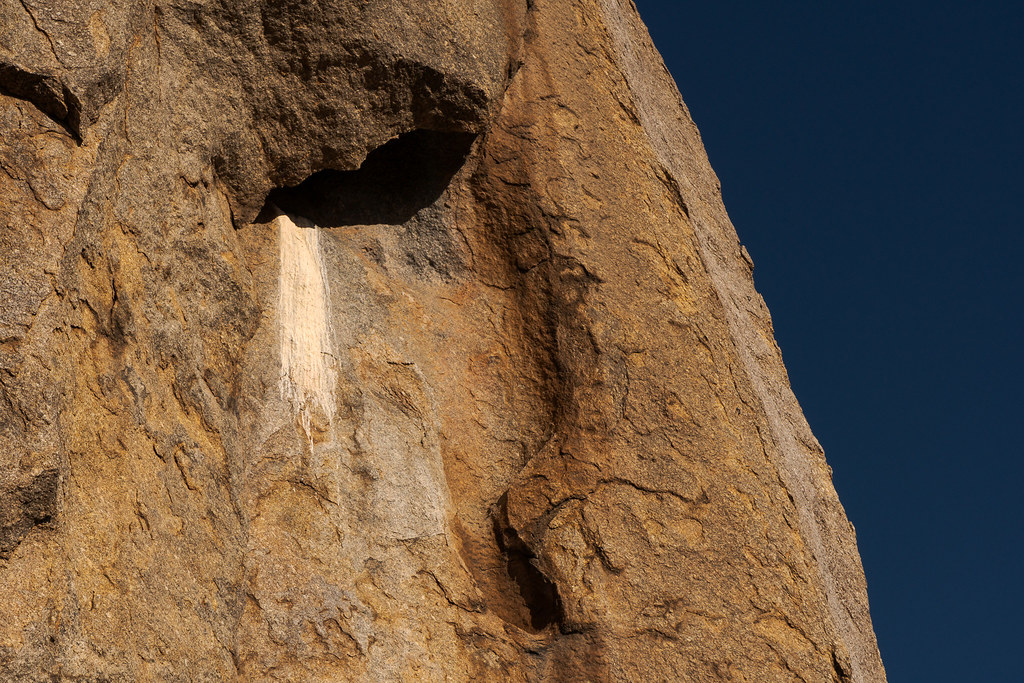 I loved the many waterfalls of the Northwest and knew I was leaving them behind when we moved from Oregon to Arizona, but as I stood under Tom’s Thumb I realized I had found a waterfall of sorts. I didn’t need a slow shutter speed to turn the waterfall into a flow of white. I’m not sure what kind of birds are making their home up there but further around the rock formation prairie falcons were nesting, as the rock climbing route was closed while the falcons were nesting. You can see one of the routes on the right side of the picture, it’s the thin grey line ascending the rock face. 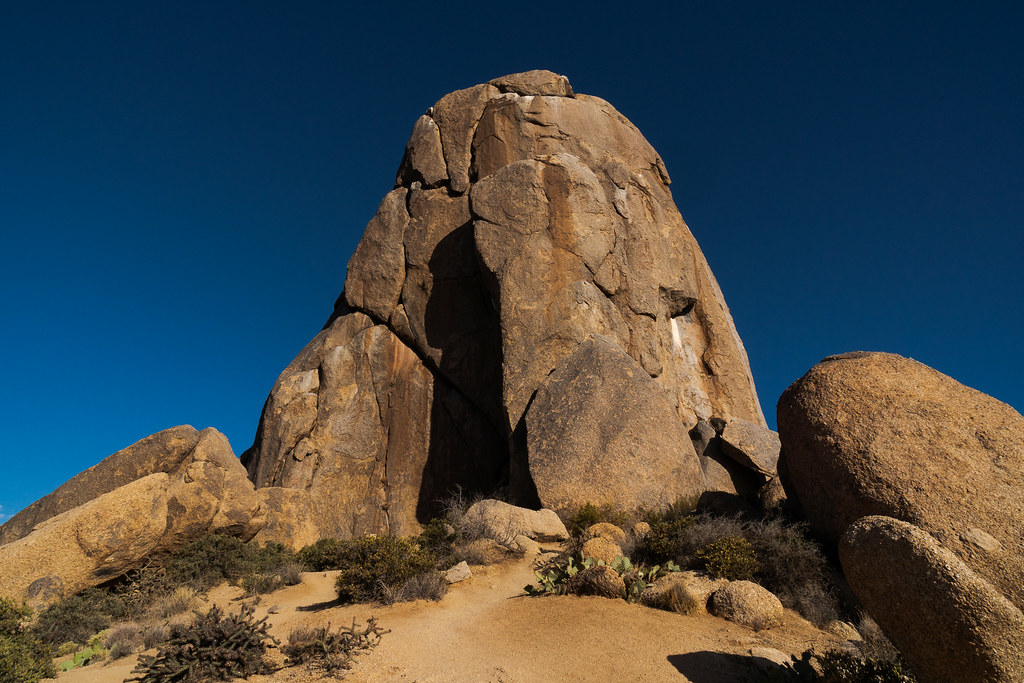