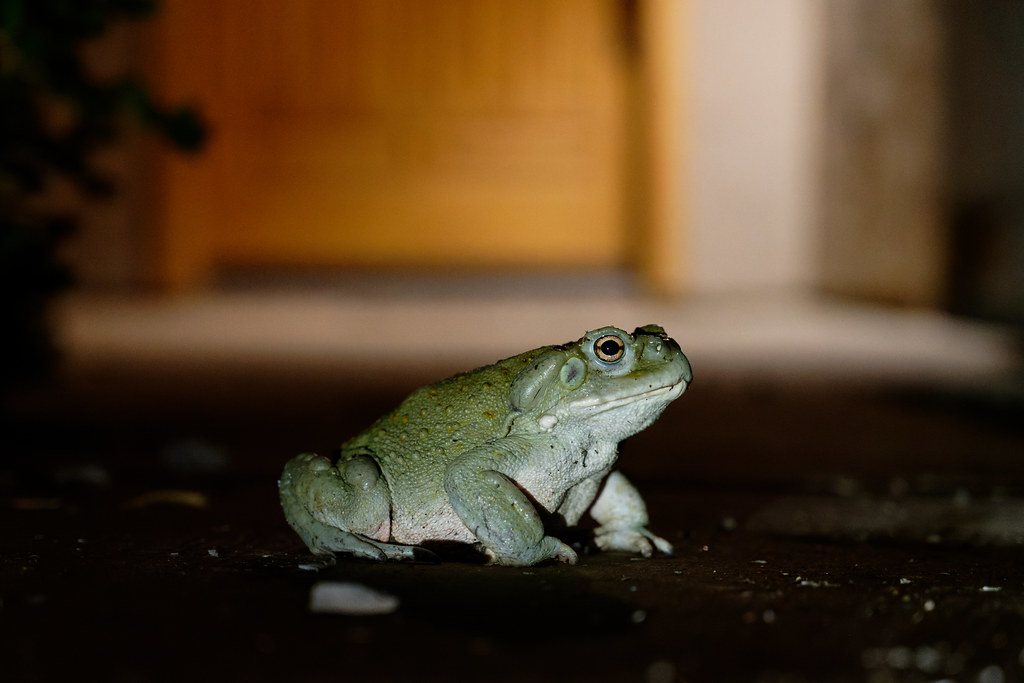 A couple of weeks ago my wife mentioned our dog Bear was interested in something outside and even our cat Trixie was pawing at the door. She hadn’t seen anything outside so I grabbed a small flashlight to have a look, mostly worried a neighborhood dog or cat had gotten loose but also hoping for a glimpse of a bobcat or coyote. I could hear something moving in the yard but my brain couldn’t place the sound with anything familiar and the sweep of my flashlight revealed no clues.

I turned the corner of our garage and couldn’t process what I was seeing. There at my feet was something with the look of a toad but the size of a bullfrog. Despite clearly being alive my brain kept thinking it was a ceramic toad someone left on our doorstep, as though that was a more likely alternative than a living, breathing giant toad in our yard.

I went inside to grab my camera and came out moving gingerly to avoid disturbing it, though it didn’t seem too bothered by me. I put the flashlight on the ground to illuminate it and took a quick shot before leaving it be. After giving it room to hop into the yard I noticed a visibly smaller toad a few feet away that would still have been the largest toad I had ever seen were it not for the behemoth I had just photographed.

I turned out the light and just listened for a while to the sound of an 800 pound toad (an estimate, I didn’t weigh it) hopping across the stones in the dark. I went inside and got out “A Field Guide to Amphibians and Reptiles in Arizona” by Thomas Brennan and Andrew Holycross and without even looking at the pictures just scanned the words, skipping past the toad descriptions that began “A small” or “A medium” and stopping as soon as I read “The largest toad in the United States”. Their picture matched mine and knew my first amphibian in the desert was a Sonoran Desert toad.

At first I was disappointed it wasn’t a more scenic shot but I came to love that our door is visible behind it as this is the same spot last year where I saw my first black witch, a previously unknown-to-me species that like this toad is not only the biggest in our land but is so big my eyes couldn’t see what they were seeing. I also saw my first kingsnake in the bushes to my left and have seen our native gecko here (my first sighting of one was in our backyard though). I’ve not tried identifying the bats that sometimes hang out here. Nor the giant crab-like spider I saw walking upside down, I didn’t look long as I already have enough trouble sleeping at night. Javelina and bobcat come through here too.

I won’t be surprised if next summer I step outside and see a sixty foot rattlesnake or some other behemoth I didn’t know existed. I mean I will be surprised but …