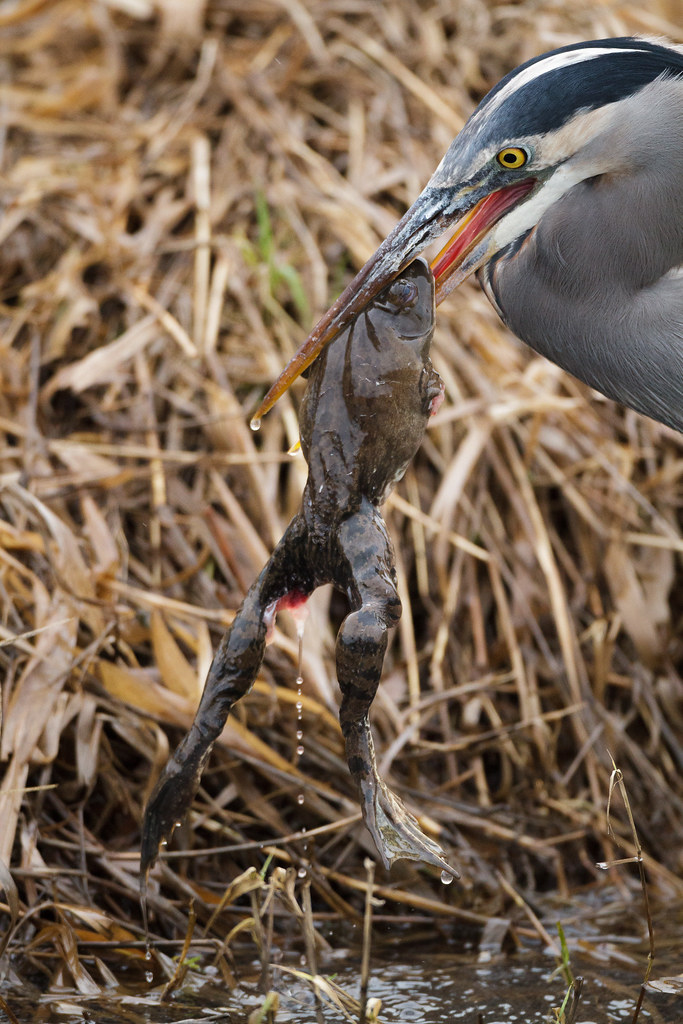 Bullfrogs are voracious predators and not native to the Northwest but they are also a food source for a variety of animals that have learned to eat them. This large bullfrog was I think killed by a family of otters that came through earlier, it looked like one of them had caught the frog and eaten its front legs and a bit near the back before leaving. The heron was happy to eat what the otters left, dunking the frog a couple of times in the water (birds like herons and bitterns do this at times with their prey when near water) before getting it positioned in its beak where it could swallow the frog whole. 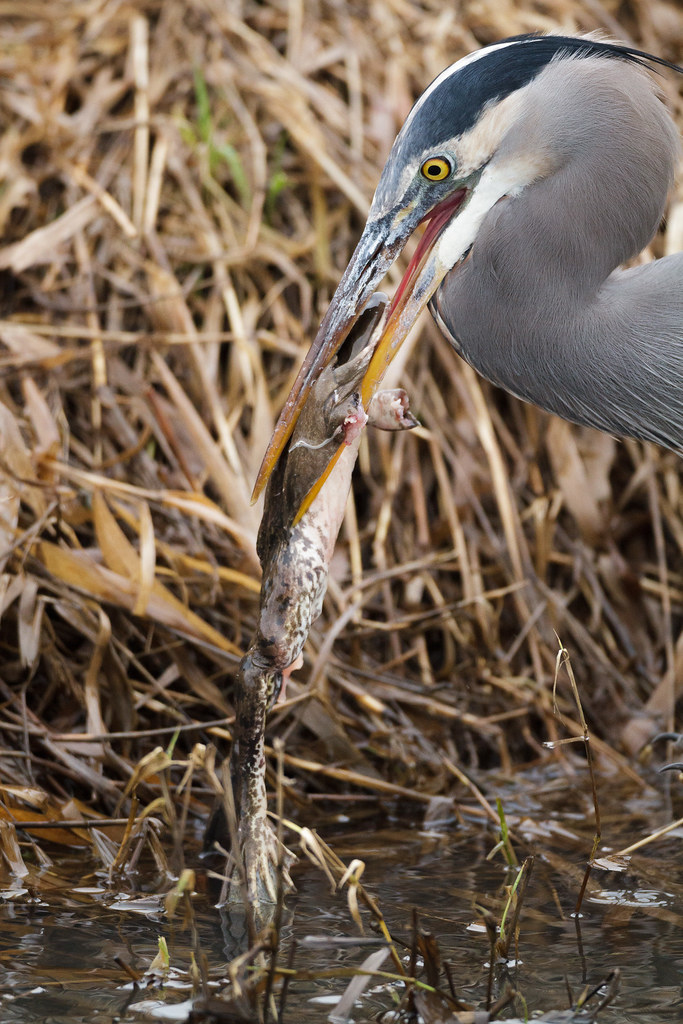 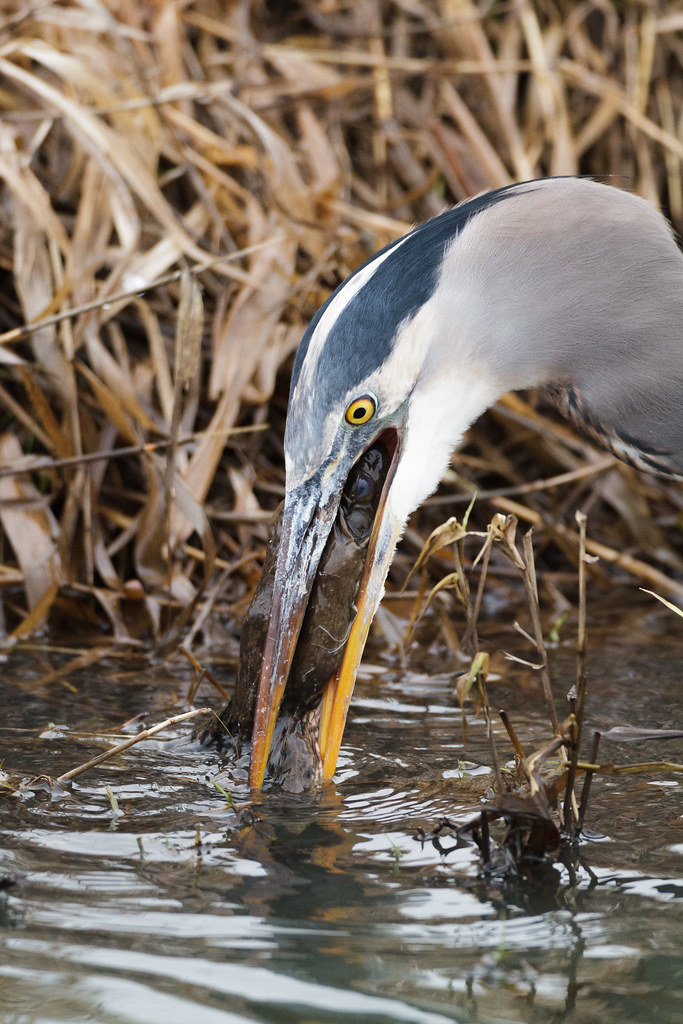 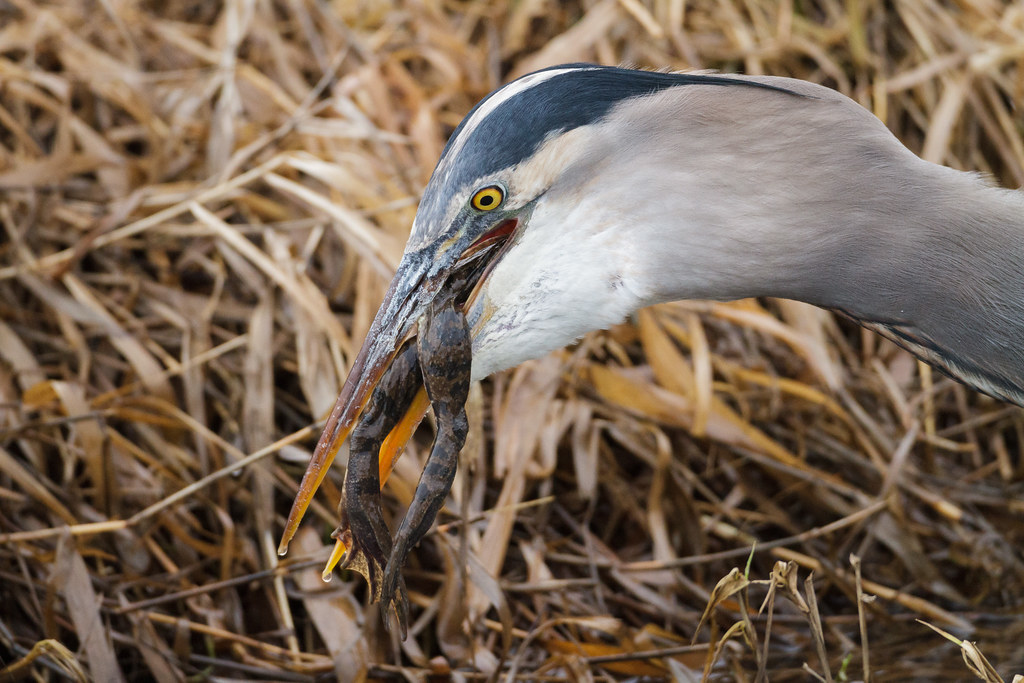 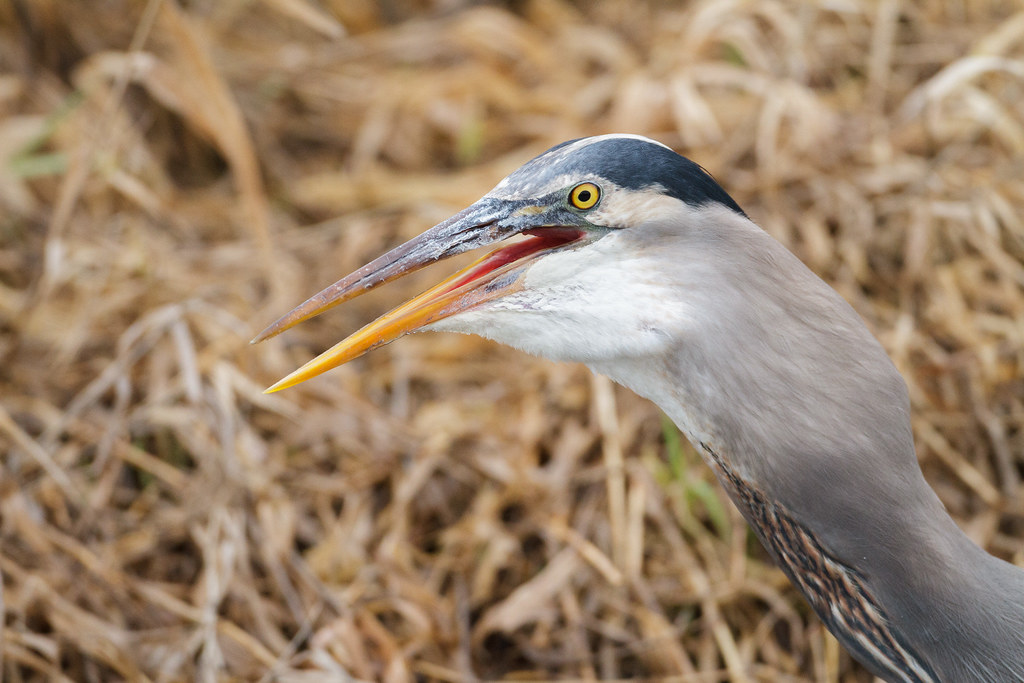 No but I do have a frog in my throat. 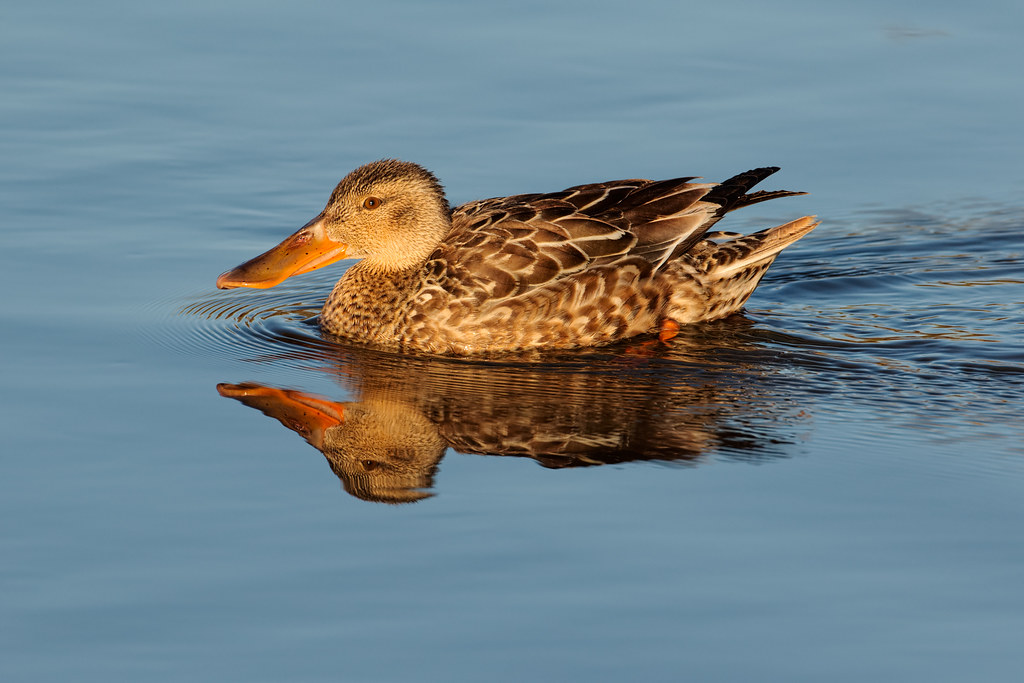 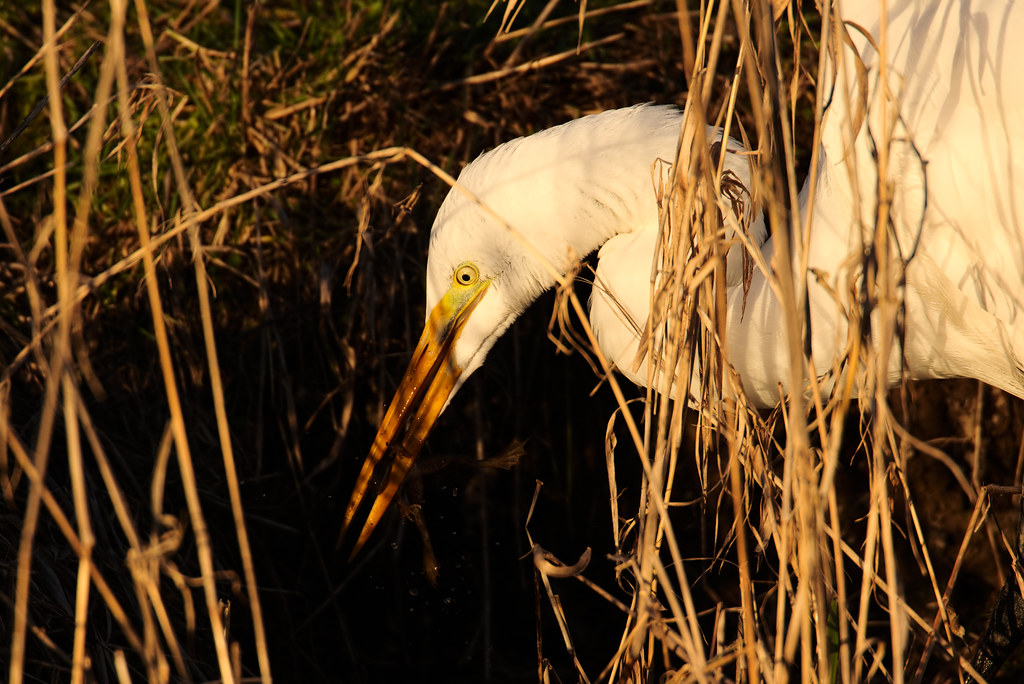 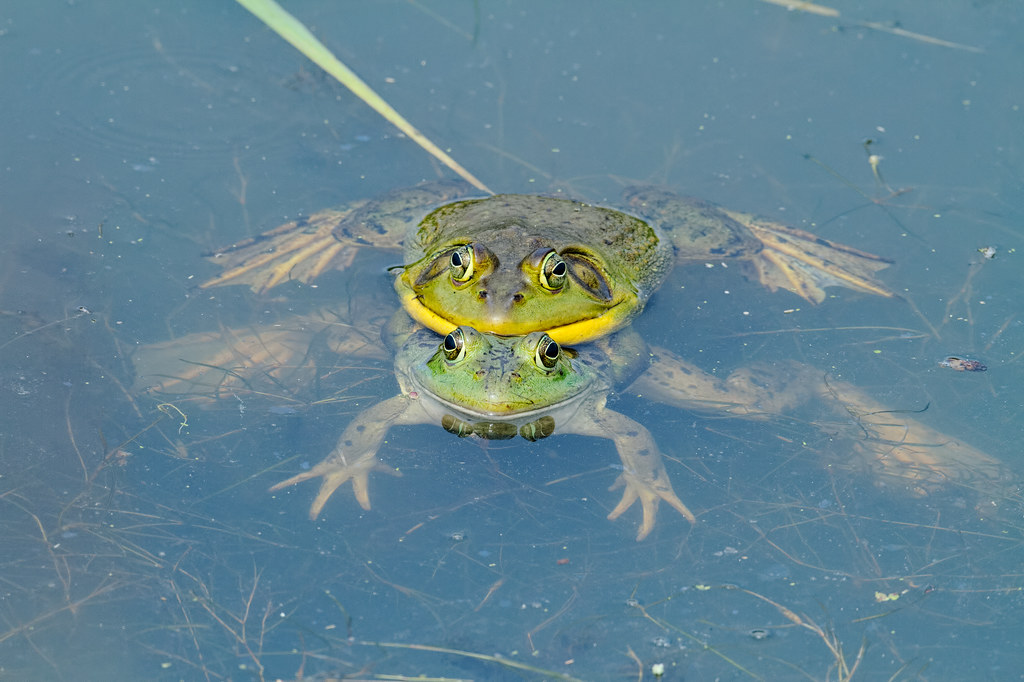 These mating bullfrogs were serenely floating in the water while around them was chaos, with males playing leapfrog and wrestling each other into submission and croaking loudly. The male here is the one on top with his characteristic yellow throat and large tympani (the eardrums, the big circles behind the eyes). The water was mostly still but there was a subtle current and they both used their webbed rear feet to control their speed and balance. They don’t have webbing on their front toes, so the female used her front legs to maintain balance while the male has his wrapped around her body. 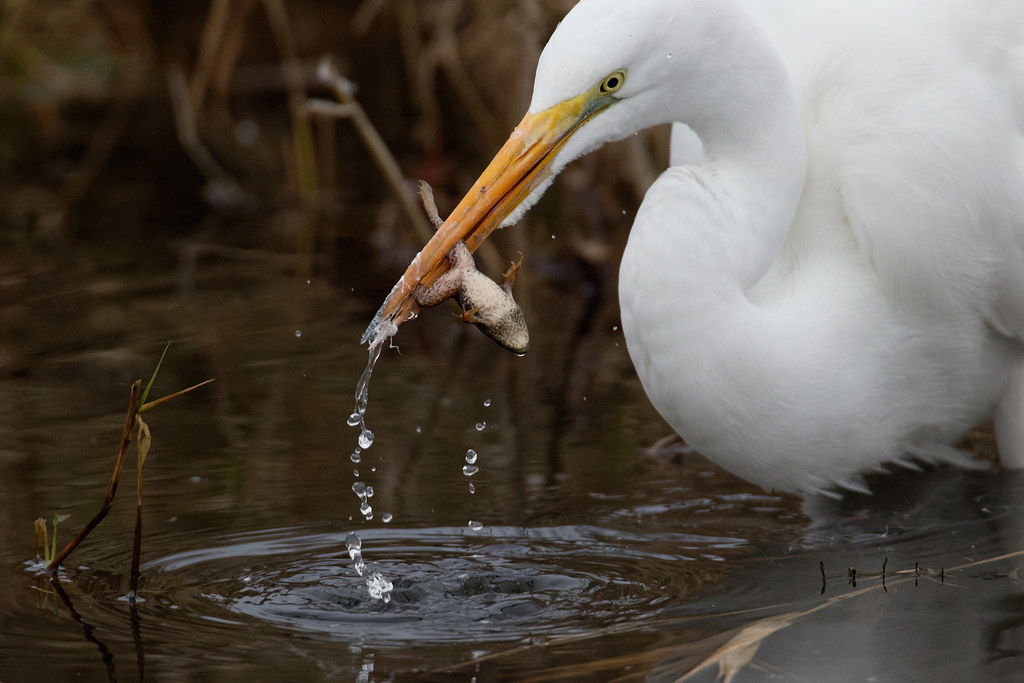 Bullfrogs hibernate during the winter so their metabolism slows significantly and they aren’t very active but they don’t bury themselves in the mud the way a turtle might. Many bullfrogs at Ridgefield found their hibernation cut short this winter by the herons and egrets and bitterns that worked the shallow channels and ponds of the refuge.

This egret in particular was just walking up and down one such channel, avoiding a great blue heron doing the same, striking at bullfrog after bullfrog, following a familiar process between catching the frog and eating it. First, the frog would be dunked quickly into the water, as shown above. Next, the egret would spin the frog rapidly, presumably causing massive internal injuries to the frog, as shown in the following two pictures. In the first picture, the egret has closed the nictitating membrane in its eyes, a transparent third eyelid that protects the eye from damage while still allowing the egret to see, as water spins off the frog and its clawed feet flail about, while in the second picture the membrane has been retracted. 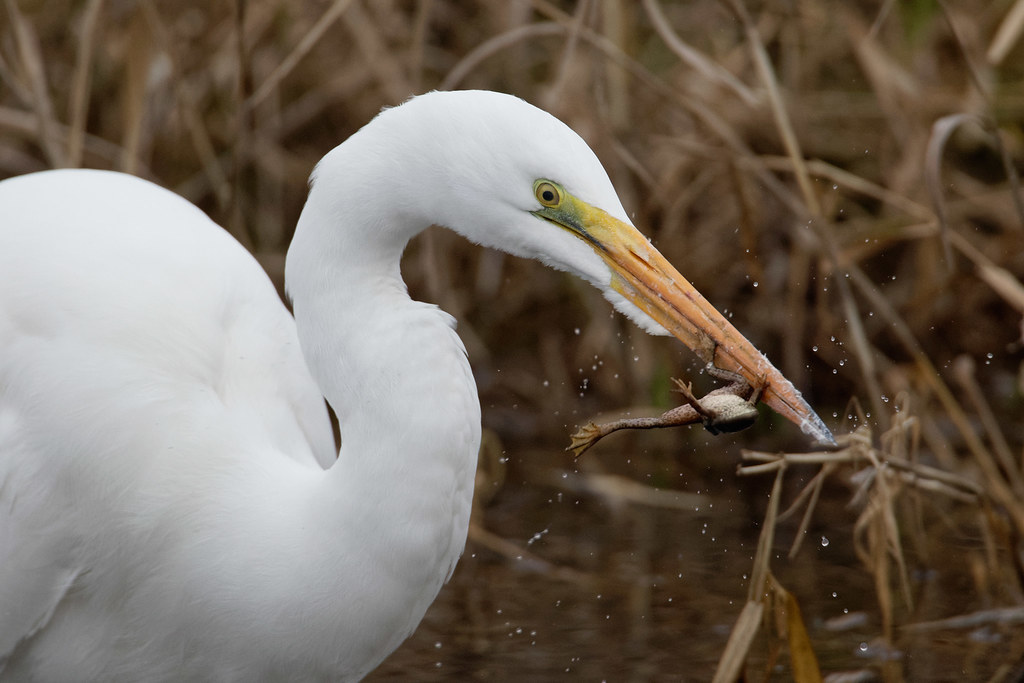 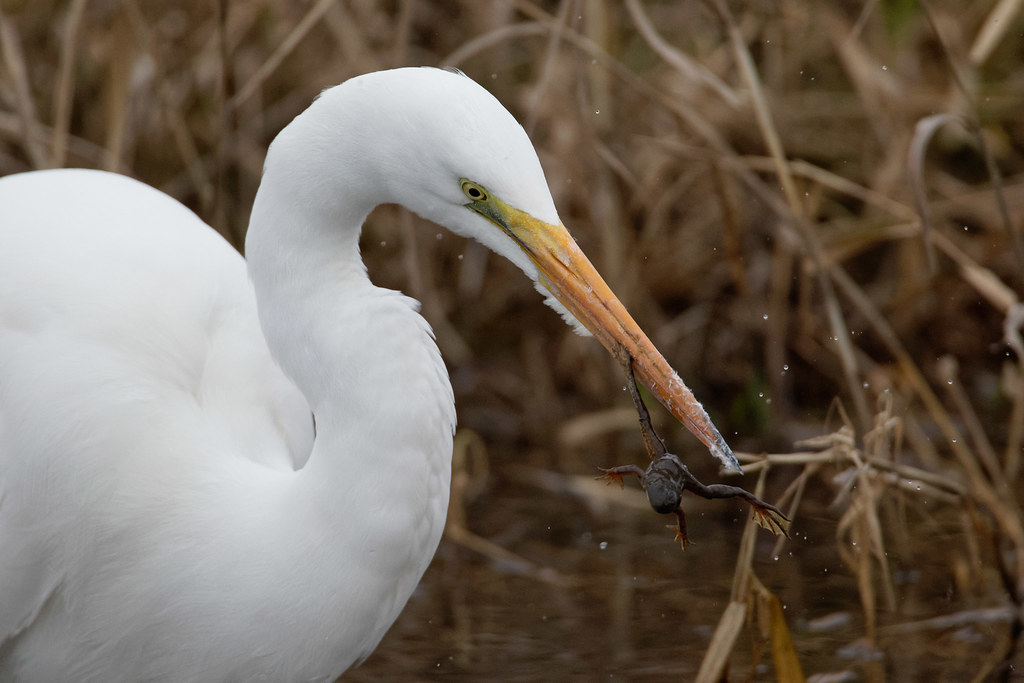 Then the egret would toss the frog into the air, catching it in a different place on its body, and either repeat the process again if it caught it by a leg, or perhaps crush it in its beak if it caught it by the body. This would happen multiple times until I gather the frog had died or given up fighting, although with the egret constantly keeping the frog moving it was hard to tell exactly when or if the frog itself stopped moving. 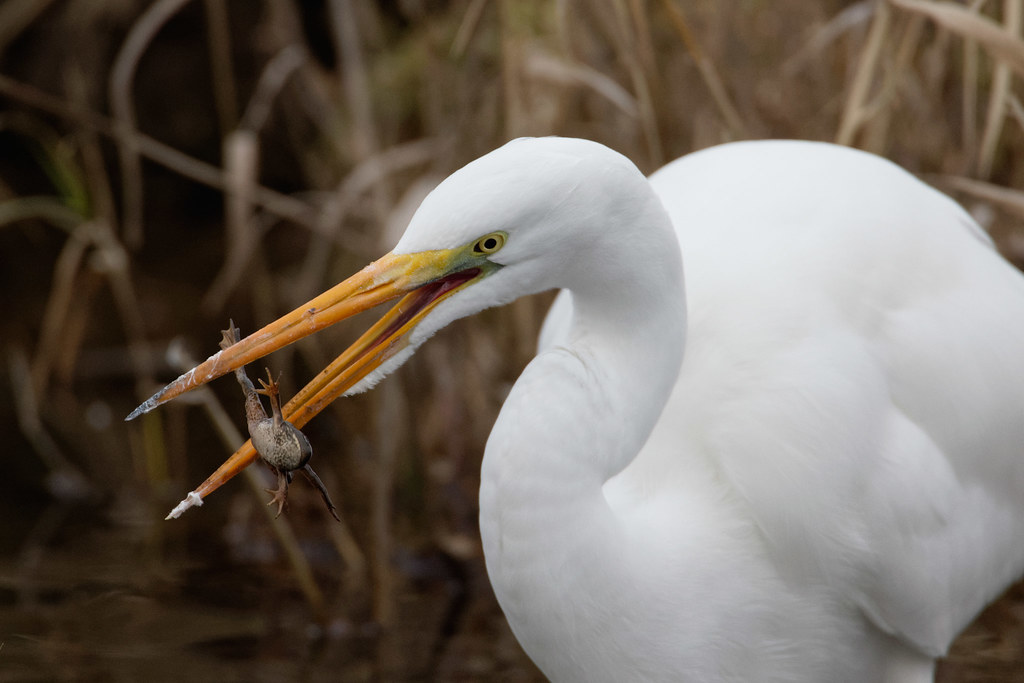 The final step was to position the frog head first in its beak and swallow it whole. Bullfrogs are voracious predators and, as they aren’t native to the area, have had a big impact on some of the other small creatures in the ponds and sloughs. However I’ve seen the bullfrogs themselves become prey for the larger predators of the refuge, including not just egrets and herons and bitterns but otters, raccoons, and grebes. 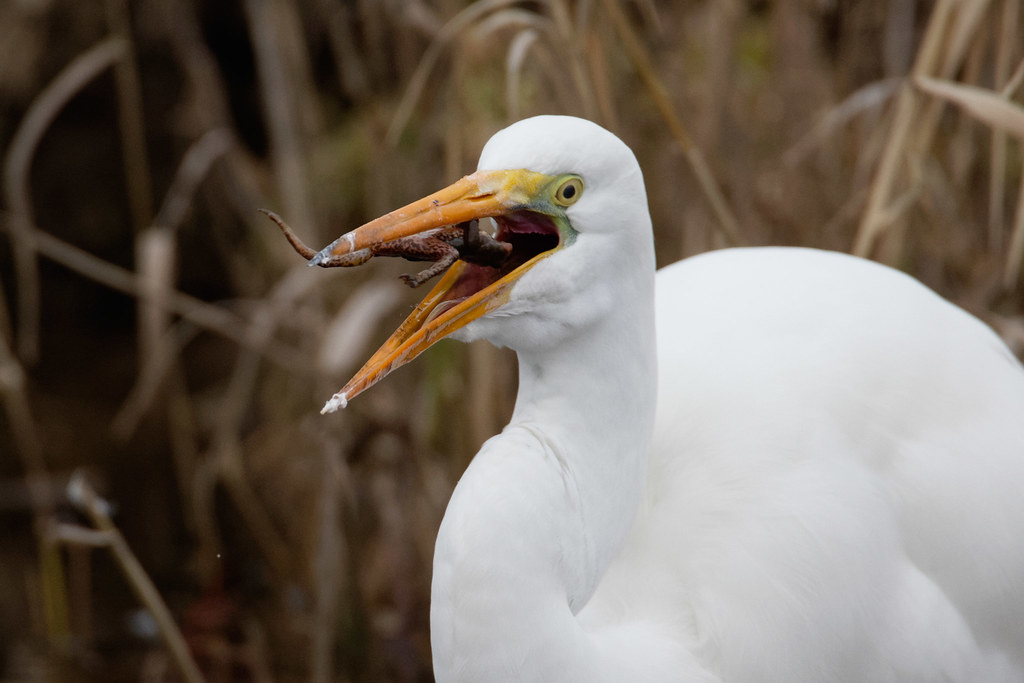 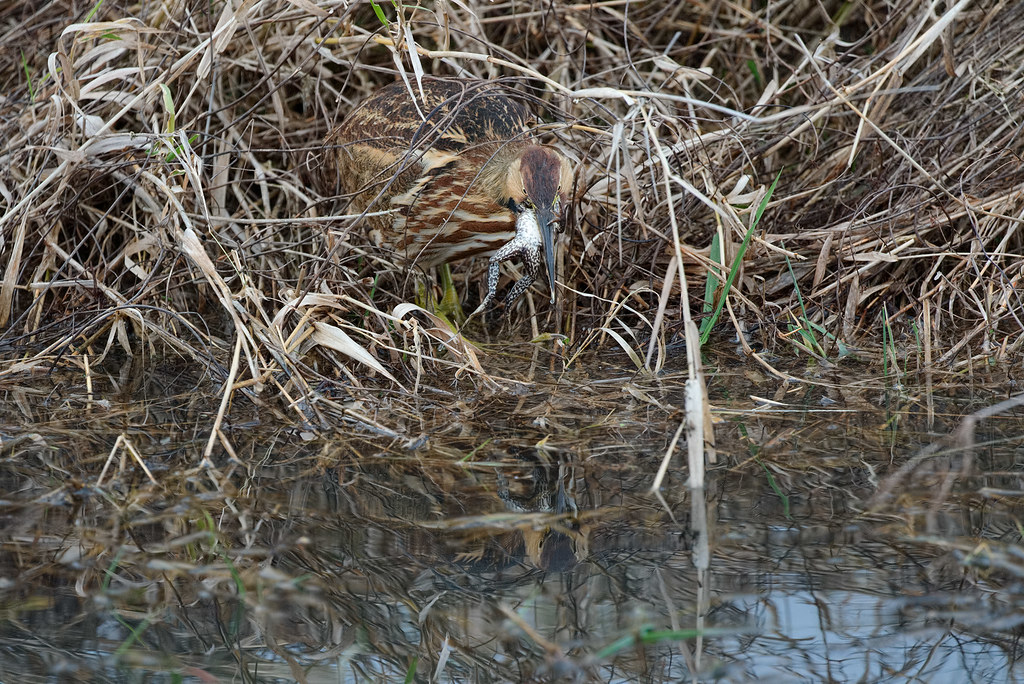 Normally I’m pretty good at spotting bitterns at Ridgefield but I saw them on only three out of ten visits to the refuge over the Christmas break. I worried I was losing my touch until I found this bittern on Christmas Eve slowly working the channel beside Rest Lake. I suspect the real reason I haven’t seen as many this year is that the grasses in this area, normally my best spot for seeing them, have been cut lower in places, eliminating cover for both the bitterns and the animals they are hoping to catch.

The bittern snagged a large bullfrog from the water as you can see in the top picture. In the picture below the bittern has swallowed most of the frog with only the rear feet sticking out of its mouth. The bittern has protected its eyes from the frog’s claws with a nictitating membrane, a common tactic in the chaos of swallowing something that doesn’t want to be swallowed. 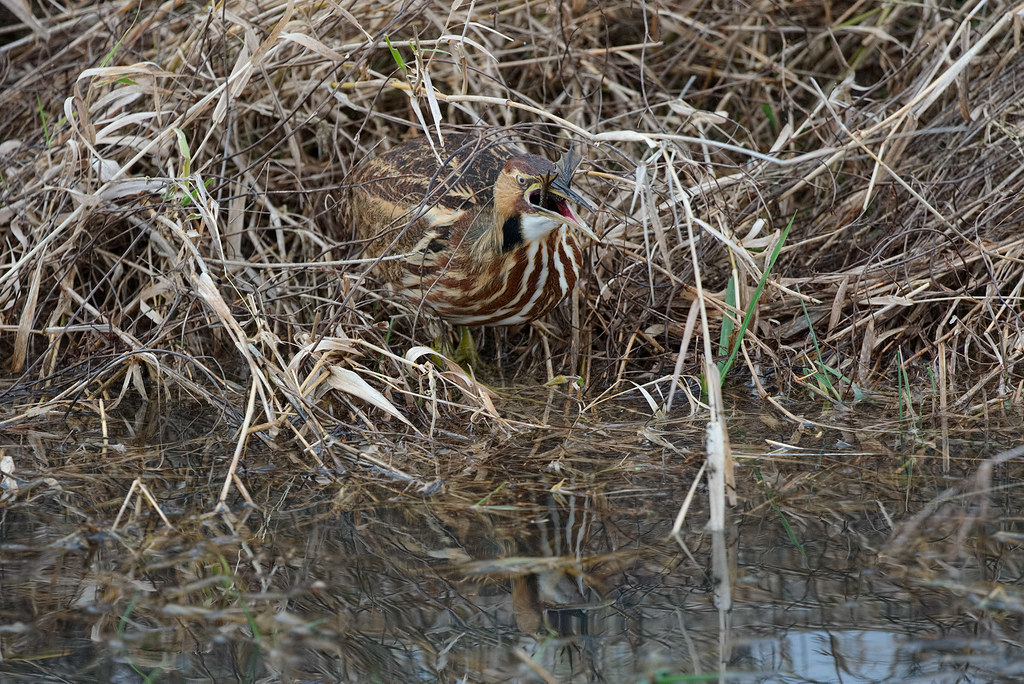 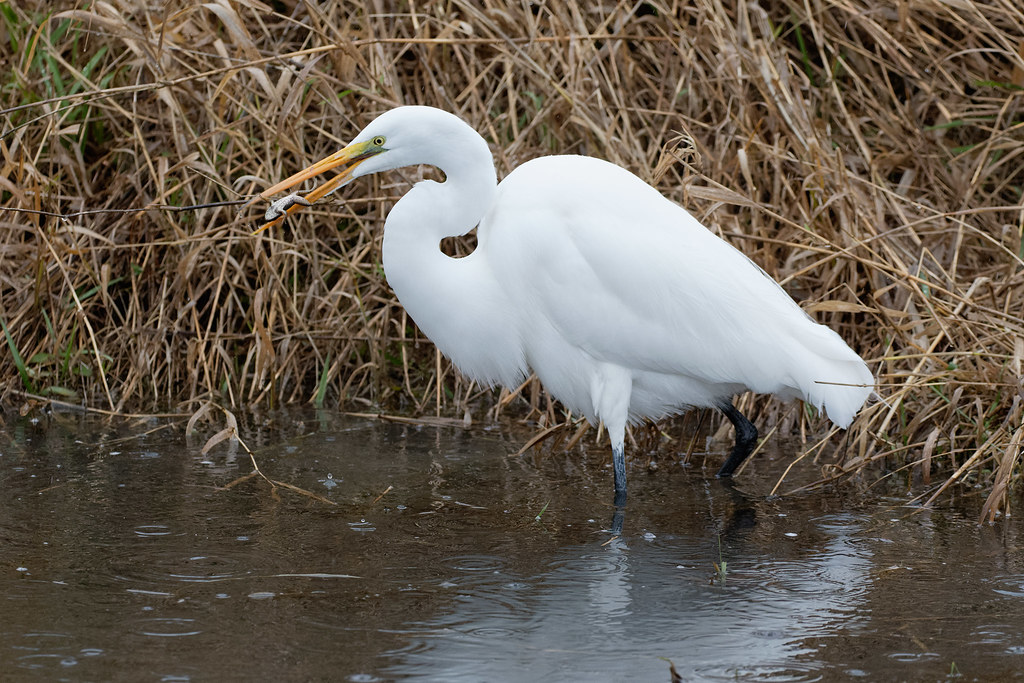 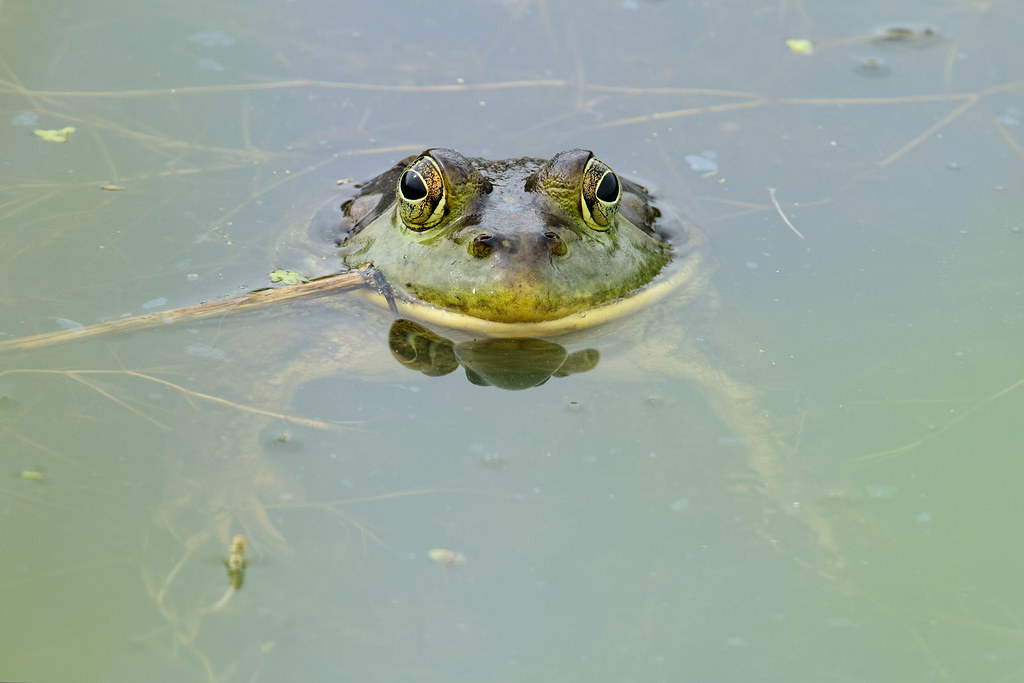 A male bullfrog floats in quiet contrast to many of the others nearby that were either wrestling with males or mating with females. 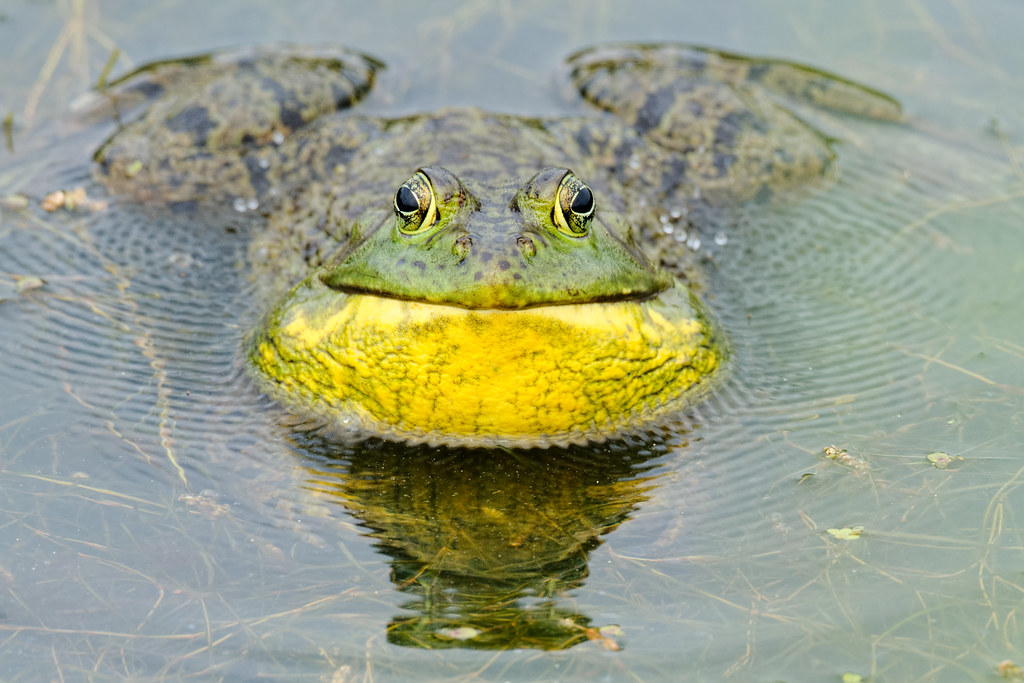 But let all who take refuge in you be glad; let them ever sing for joy.
Psalm 5:11

The bullfrogs were singing in rare form at the refuge this weekend. Breeding season was in full swing and the males were croaking and wrestling and leapfrogging each other, and a few lucky ones were mating with the females. They were in a channel beside Bull Lake so I had to shoot down on them between the tall grass. Between a gentle breeze that constantly moved the grass about and my temporary bout of photographic incompetence, it took me a while to settle in and find my way.

This male was one of my favorites. I wanted to catch the ripples made by his croaking but was a bit surprised that my favorite view of the ripples is before his throat fully expands. The problem was that by the time his throat is fully extended, the ripples interfered with each other as they bounced off his rear legs, breaking up the pattern.

Beautiful creature, this one. Beautiful. 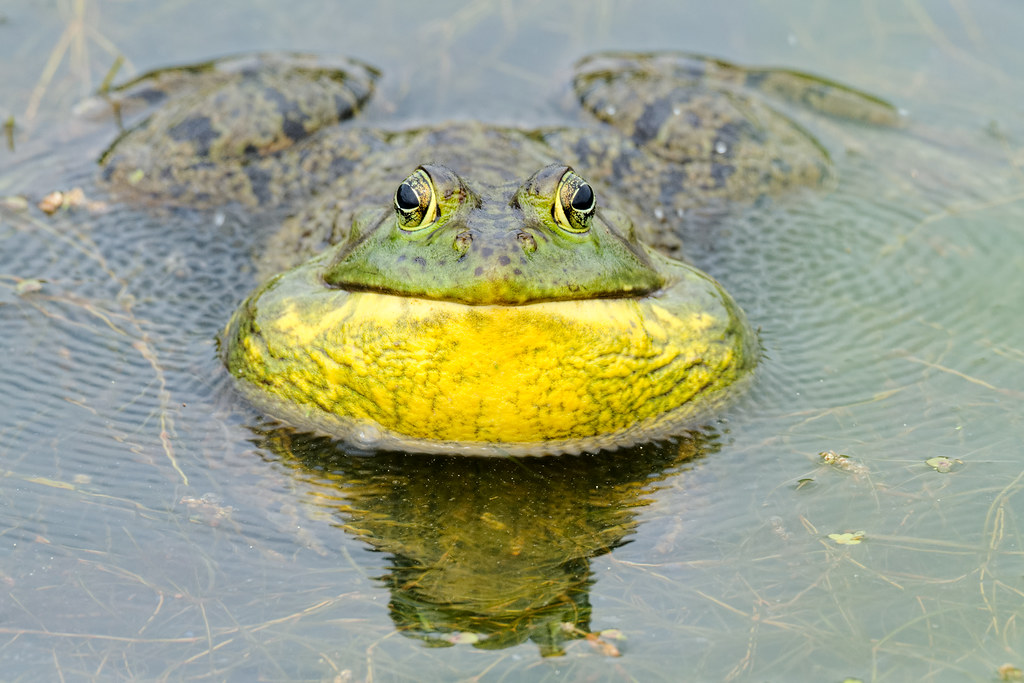 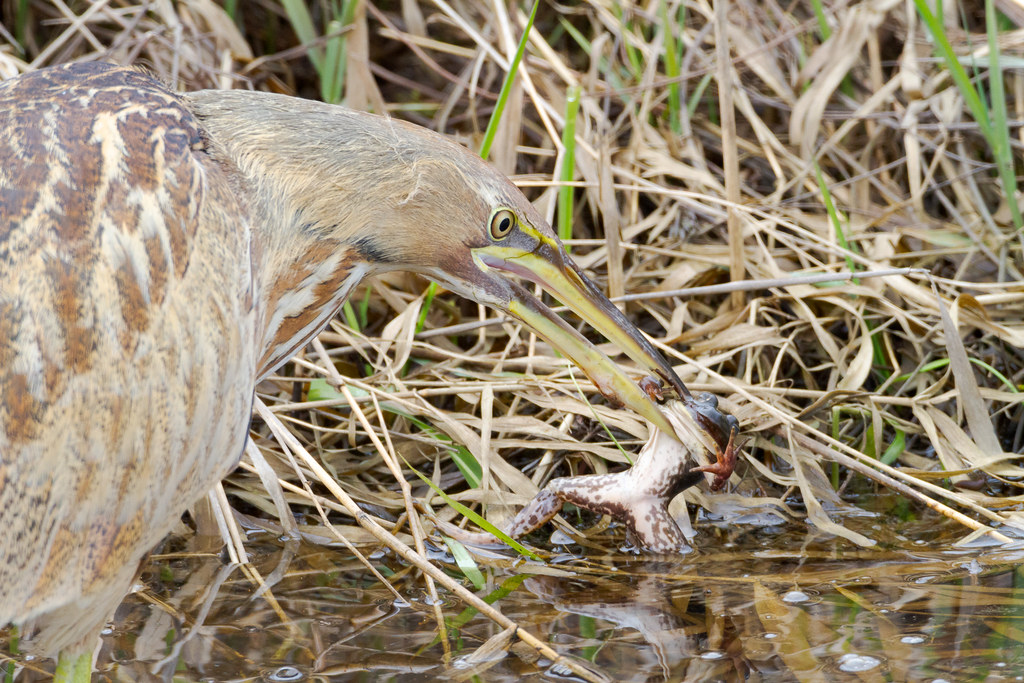