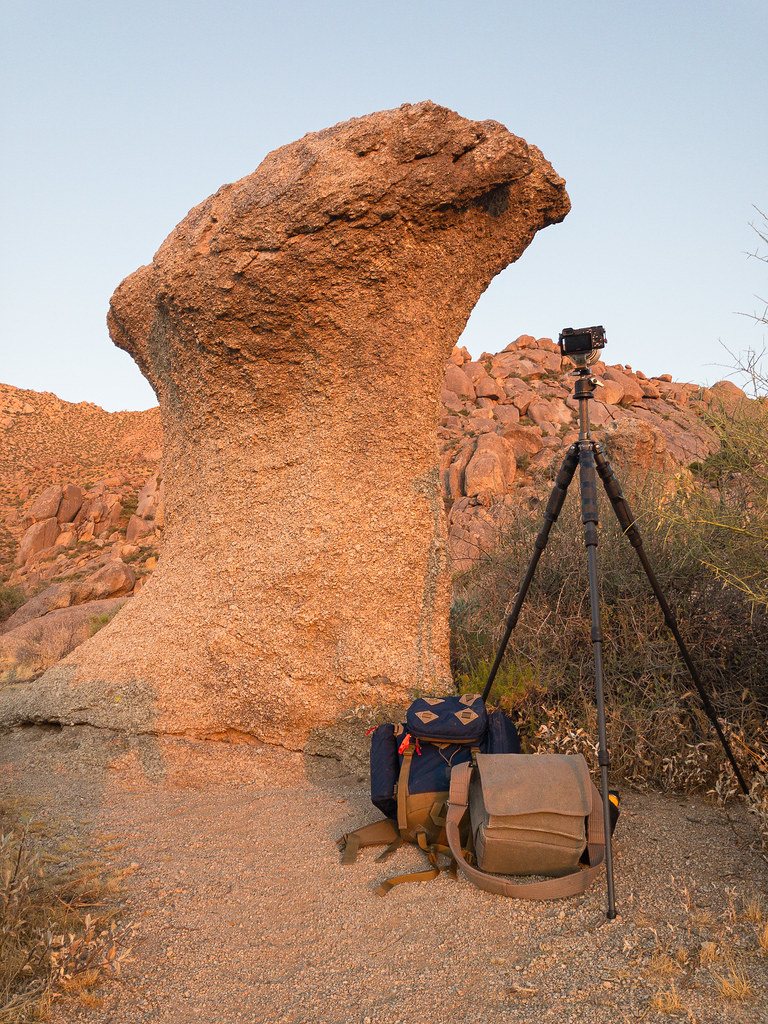 A peek behind the scenes at my setup as I photographed a mockingbird doing its ritual dance this spring, it would perch on a large rock betwixt me and the hillside. I photographed from two locations on three successive mornings right around sunrise, twice from this spot beside the mushroom and once just a bit to the right on the other side of the palo verde. On this morning a thrasher flew in and the mockingbird left off its dance right as the sun started to clear the mountains and bathe the desert in soft red light, so in the quiet moment before the mocker returned I stepped back and took a picture of my gear with my iPhone. You can see the large crack at the base of the mushroom, some day it will fall over but on these mornings it was a steadfast companion as we listened to the mockingbird sing. This mushroom holds the xenolith I photographed back in December, it’s down in the corner behind my backpack. The sign describing it is just to the left, taken on the Marcus Landslide Trail in McDowell Sonoran Preserve.

There was a time when we were preparing to move where I didn’t want to have to make one more decision, major or minor. After arriving in Arizona there were plenty more decisions to be made, even for fun things like choosing new hiking gear for the desert climate. But as things slowed down I’ve taken the time to make some upgrades, some of which should have occurred a while ago but I didn’t have the bandwidth to deal with them.

My laptop will be 5 years old in a few months and all is not well under its lovely exterior, a problem since I use it as my main computer. I was torn between a new laptop or a new desktop but neither was quite what I wanted until Thursday morning when I woke to news that Apple updated the 15″ MacBook Pro to my liking. After walking Ellie I ordered one before leaving for work, it should be here by the end of the week. As you’d expect given the age difference there are many improvements in the new laptop, the benefit I’m most looking forward to is 32 GB of RAM, four times what I have now and 50% faster too. The processor is much faster and with two more cores. The SSD is faster but more importantly will store twice as much at 2 TB. It has a dedicated video card (which I don’t think I care about one way or the other) but it has 4 GB of RAM itself which will be nice.

All of which should making editing images a more enjoyable process. When I started shooting with the Sony A6500, its 24 megapixels compared to the 20 of my Canon 7D II seemed trivial but something crossed a threshold as editing those images became more painful, especially when trying to do quick back-to-back comparisons. I’ve also been holding off processing the 4K video I’ve started playing around with, that in particular the new laptop will be much better suited for, so I’m going to purchase Final Cut Pro and learn to edit video.

I’ve been thinking about replacing my tripod head for quite some time now, it doesn’t hold the telephoto lens well when at an angle and the quick-release hasn’t worked well in years, so I purchased the Really Right Stuff BH-40 ball head. It went on my old Gitzo tripod and has been doing well with my 100-400mm lens. Here the pair are attached to the bottom of my Tom Bihn Guide’s Pack with my camera bag (an old Tamrac I’ve used since the 90’s when I got into photography) and Black Diamond trekking poles alongside, my setup after I put my camera away when the light gets too bright.

I’ve had the poles a while but hadn’t used them too much until we arrived in the desert but I am loving them, they fold up so they go in the backpack until I’m ready for them, then I can get a good speed going with the poles and they are fantastic when the granite pebbles make the footing a bit dicey. They’re carbon fiber so they weigh next to nothing so I don’t regret bringing them on the rare day I end up not using them.

I’ve always loved the 100-400mm lens for hiking, I got the original Canon version in 2001 and the updated version as soon as it came out in 2014. But here in Arizona I’ve found I prefer to use it with a 1.4X teleconverter and the Canon camera doesn’t work well with it, so I purchased Sony’s 100-400mm and teleconverter and the combination has been an absolute joy. I wasn’t expecting to use Sony for my wildlife work but I probably should have bought this lens when it came out, it’s fantastic (as is the Canon lens, my complaint is with the camera not the lens). This was my setup at Cathedral Rock when I spent the morning photographing desert spiny lizards, got a number of great pictures thanks to the new gear.

You might have noticed from the previous picture that there’s a new camera bag, it’s the Think Tank Photo Retrospective 20 (Sandstone). I used the old Tamrac on every hike for over 20 years, can’t believe how long it’s lasted! Most of it is still in fine shape but two of the three buckles that secure the top are down to one prong holding the clasp together, along with some other less severe problems. I’ve been meaning to replace it for years but it’s been such a great bag I was hesitant to do so, but with the new Sony gear the Retrospective 20 had a feature which pushed me over the edge: I can put the Sony 100-400mm with the teleconverter and camera attached into the bag, then easily retrieve it if I see something to shoot. It’s worked out great so far, here it is next to my backpack beside my favorite saguaro.

The long and short of it is, I’m happier hiking and getting better pictures and soon enough I’ll be happier editing them too.

Before I go let me express my gratitude for Things by Cultured Code, I’ve used it as my task manager for a while now but the improvements they made in the last year or so really proved their worth from when I started looking for work to when we arrived in Arizona, I use it every day but on those days when so much had to be done in such a tight timeframe it kept me sane as well as on task. It syncs flawlessly between my iPhone, iPad, and MacBook Pro (I use it regularly on all three devices) and it’s a great balance of simplicity and sophistication. 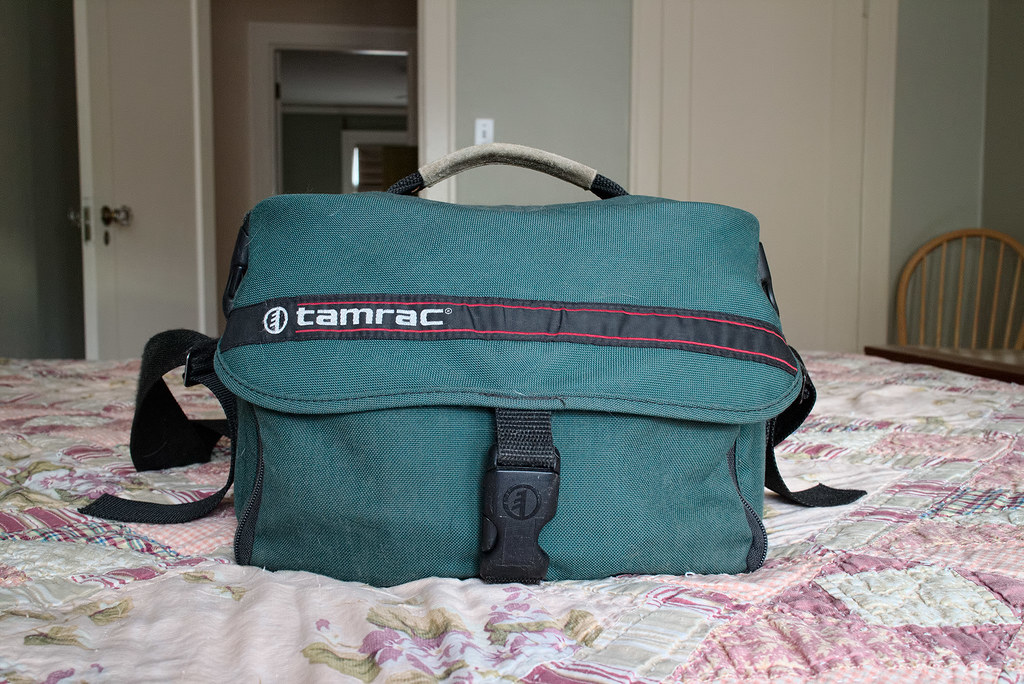