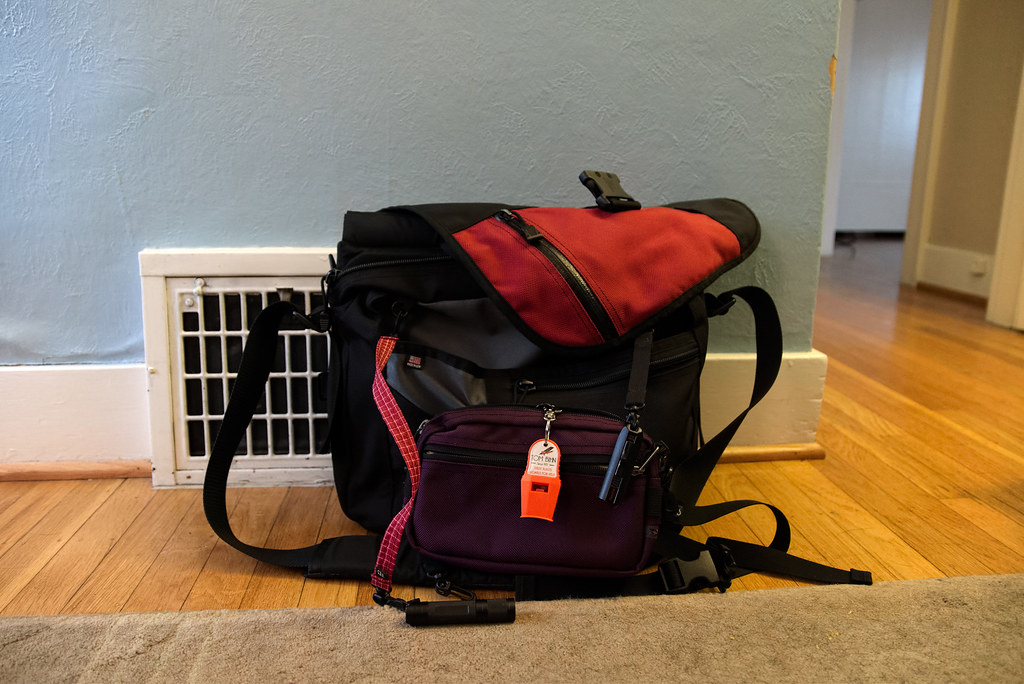 My Tom Bihn ID messenger bag has been in daily use for twelve (and a half) years now. I first wrote about it in my eleven year review and it is still the bag I use every day. I’ve added a few accessories, most importantly a 16″ Tom Bihn key strap with a Fenix E12 flashlight attached at the end. It’s not so much for me to see as for me to be seen as I’m walking on my commute, either to or from the train when I take the MAX or in a dark parking lot on days I drive. The red color of the strap makes it easy to see in the bag, which is not true for the flashlight which sadly only comes in black. Because the strap is near the side of the bag, while walking I can reach behind me and under the flap and grab the strap without breaking my stride, enabling me to pull the flashlight out without stopping or even moving the bag around to my front. It’s also nice that the light can hang from the strap if I need to adjust my gloves or use the phone.

I also added a new Brain Cell that is perfectly sized for my 15″ MacBook Pro and an Aubergine Side Effect (with a safety whistle attached in the picture) which fits in the front of the ID and adds more organization. I’m still deciding exactly what to keep in the smaller bag, or if I’d rather leave it in my backpack instead. I put a USB stick on another key strap, I don’t need one very often, but this way I always know I have one and can get to it quickly. I also have an iPad now which makes taking the train much more pleasant, and it can go in several different places. I usually place it beside the Brain Cell in the laptop compartment where it’s pretty secure, but it can also go more loosely in the front compartment or in the magazine pocket on the back of the bag (it can be stowed very quickly there, a convenience if I’m a little late in realizing my stop is coming up).

I have gone back to riding the train most days which puts a lot more stress on the bag than when I drive, as it is under load during the time I’m walking to and from the train and when I’m standing because there isn’t a seat available. But the train commute really highlights why I’ve so loved this bag. It’s wide enough for my 15″ laptop and deep enough to carry the things I take everyday with room left over for the occasional bulky items, but not so large as to get in the way on the train or encourage over-stuffing (I don’t like backpacks on the train but in my opinion they are the only good solution for heavy loads). The front strap keeps the bag cinched down in a narrow profile but can be expanded so I can stuff a hoody or jacket in the bag during the spring and fall days when the temperature is changing drastically during the day.

After all these years the ID is gently preparing me for the day that our time together draws to a close. The back zippered compartment where the laptop goes in particular is having issues as some of the stitching is coming out or fraying from the velcro of the Brain Cell when it’s left open. Then one day while in a hurry I tried to zip the compartment closed too quickly (the new Brain Cell sits a little differently that the old one) and one of the zippers popped off one of the tracks. The other zipper still works fine but it keeps me from just zipping both ends a bit, a little trick to quickly force both ends to tuck in well below the flap for extra protection in a heavy rain. The pad on the shoulder strap is also showing wear from heavy use. In general though the bag is in great shape so it will hopefully last me for a while yet.

I don’t know what I’ll do when it’s time to retire the bag from every day use, as the ID has been discontinued and Tom Bihn hasn’t announced a replacement. And even when they do, since the ID has been such a perfect fit for me, no matter how nice the new design is I doubt it could delight me quite as much as the ID. 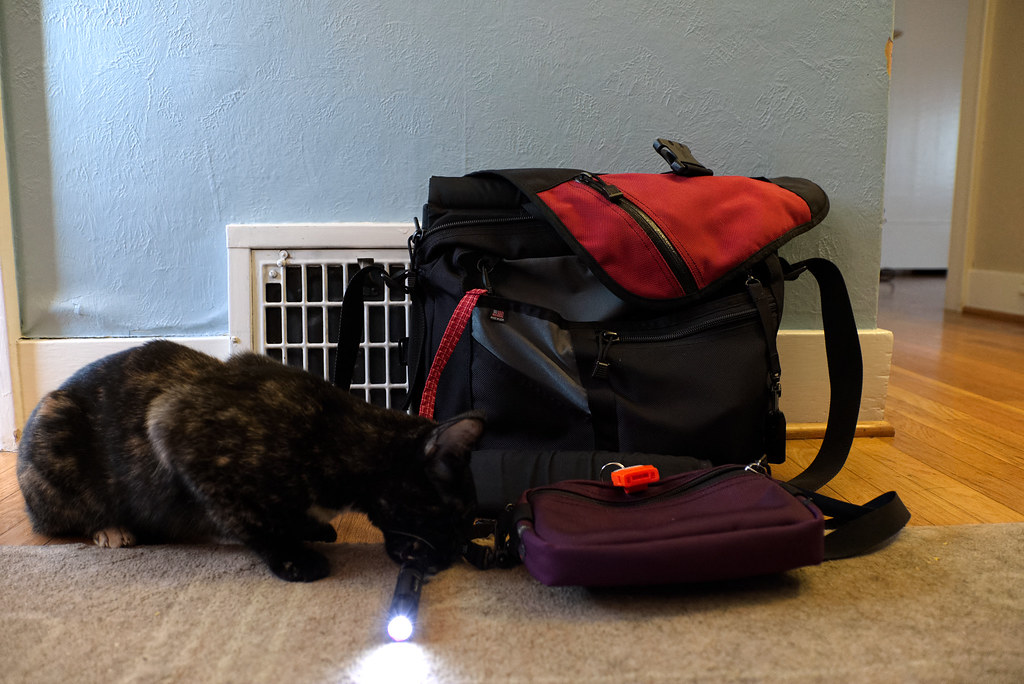 I’ve been meaning to post this update for a while but resisted for one simple reason — when I’d set up to photograph an item before, our cat Emma (who hated to be photographed) would come over and photobomb the pictures (she’s the black cat in the pictures in the eleven year review). She died a few months after that review and for a while it was too painful a reminder to set up the bag for a picture and know that Emma wasn’t going to come running over to sit nearby.

So it delighted me to no end when I set up the ID for a quick picture and Trixie came over and started chewing on the key strap that holds the flashlight. Professor Boo then came over and showed his young charge how you can retrieve the flashlight by pulling on the strap, while gently telling her not to be embarrassed, we all have to learn not to eat flashlights. I don’t know what triggered them to come over as they’re both very familiar with the bag — in fact it was one of the first things they each saw when we adopted them, Boo in 2013 and Trixie in 2015, as I brought it with me when I sat with them while they were in isolation — but it was a nice little homage to our dear departed Em. 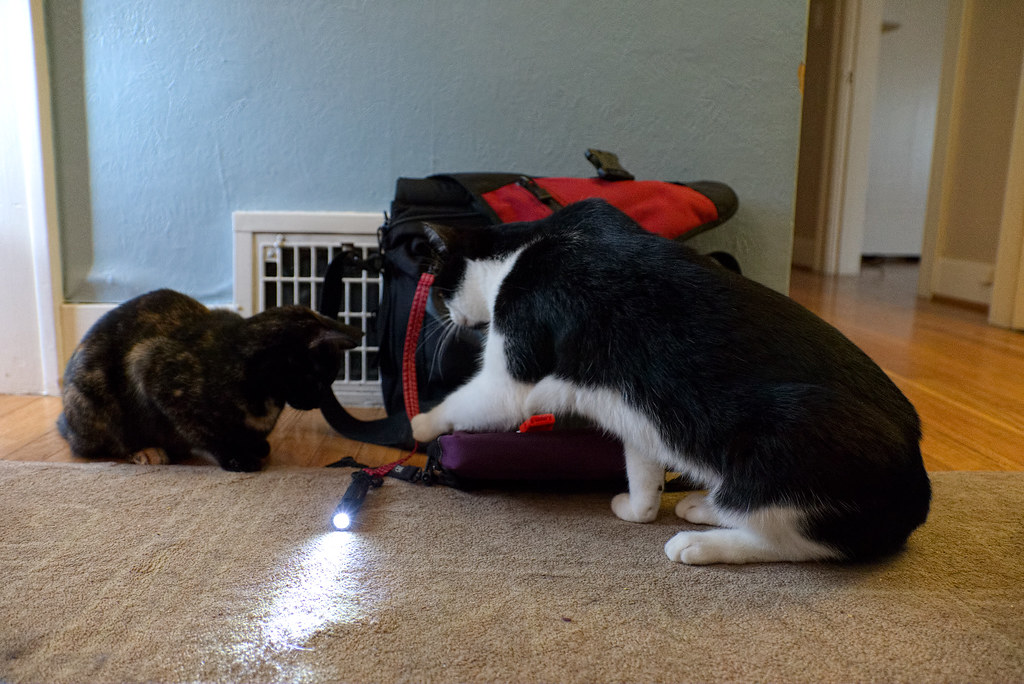 The ID is within arms reach of nearly every picture I post unless I’m out hiking or taking Ellie on a walk. It’s at my feet when I’m on the couch taking pictures of the pets sleeping on me and I bring it with me when we need to keep one of the pets in isolation (as with Sam below when he was recuperating after getting teeth pulled). At Ridgefield it’s tucked in behind the driver’s seat as I photograph the animals on the auto tour. It’s gone with me on all my hiking expeditions to Yellowstone and Mount Rainier and the like, but it stays in the hotel room while I hike. It goes with me to work every day and is sitting beside me now on the train.

I’m a little shy of fifty so I’ve been using the ID for over one out of every four days I’ve walked the earth. It’s one of the best products I’ve ever purchased, in any category, so its replacement will have big shoes to fill. Many, many thanks to the team at Tom Bihn for both designing and manufacturing such a great bag.