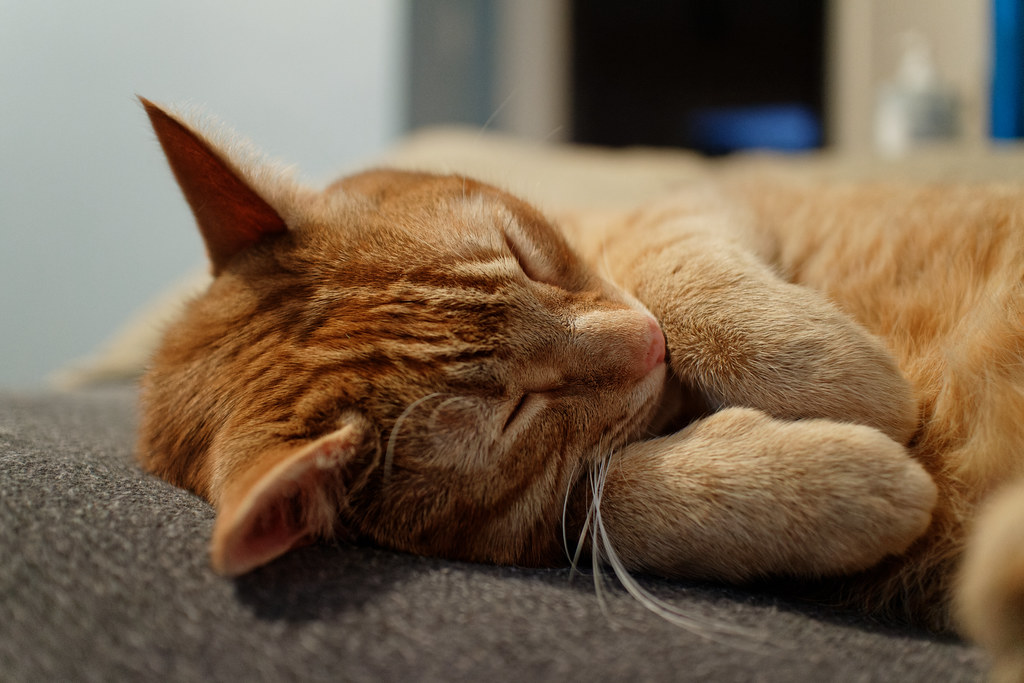 After a trying week that followed several trying months, Sam has staged a turnaround. He’s responded well to the medicines he’s been taking (fluids, anti-nausea, appetite stimulant, and motility enhancer to speed the movement of fluid through his digestive system). We started him off on baby food, which he hadn’t eaten much of a couple of days earlier but now he was able to eat, and slowly eased him back to a more normal eating schedule and his regular food. Sam is back to eating his normal meals (just more slowly than before), his energy levels have improved dramatically, and his sweet demeanor seems to be returning to normal as well. Thankfully we didn’t have to resort to force feeding him with a syringe, but we would have had to if he hadn’t started eating on his own, there’s a serious liver condition cats can get if they go too long without getting enough calories.

Which is not to say he’s out of the woods, we don’t know yet if he’s actually getting better or if the medicines are treating his symptoms but the underlying disease is still present. I’m hopeful that he is actually getting better and this may have been a stress reaction after Emma’s death. In less than two years the poor little fellow went from being the youngest of three cats to the oldest of two. He loved having his big sisters look out for him and took a great deal of comfort from them. He wasn’t nearly as close to Emma as he was his best friend Scout, but they were friends and grew up together (we adopted them on the same day), so perhaps it all just overwhelmed him one day.

We have a follow-up phone call with the vet today so we’ll see if she wants to try taking him off the medications.

It’s the first time we’ve had to give him pills and while I didn’t expect it to be easy, I was caught off guard by how much it freaked him out. Granted he’s had a difficult week but he bit me hard in my hand, twice, and eventually it took my wife and I to get pills down his throat, one holding him tightly wrapped up in a blanket or towel while the other worked the pill shooter. My wife picked up some Pill Pockets to try, little pockets of food you can put the pills in, and I was shocked that he ate them right away. I was surprised because none of our previous cats would touch them but as long as he’s eating, he went from being by far the hardest cat we’ve ever had to give medicine to, to the easiest.

It was hard to reconcile when I gave him his pill at midnight last night, that twenty-four hours earlier I was standing in that exact spot, bleeding and in pain, and Sam was as freaked out as I’ve ever seen him, and now he not only took his pill with no effort, but seemed thankful for the extra treat. They may not have worked with our other cats, but you’ll forgive me if at the moment those little pill pockets seem like humanity’s greatest invention.

I took this picture of him last summer, normally he likes to curl up on my wife or I but perhaps because of the heat in our non-airconditioned house he curled up beside me. This pose, one of my favorites of his, I call the bunny rabbit.