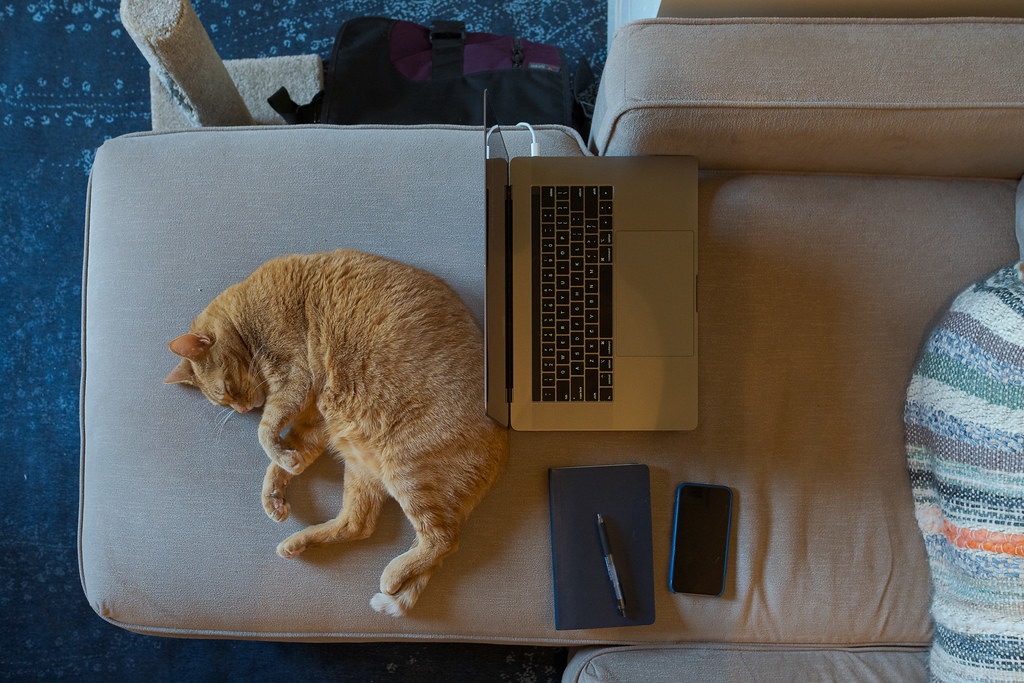 I’ve been primarily a laptop user for many years now so only the details of my home office have changed, the computers getting upgraded every 3 to 5 years and notebooks being swapped out when they fill up. One of the changes I have loved is the arrival of smartphones for keeping GPS tracks of my hikes (and dog walks) that I can sync up with my pictures. I also loved the arrival of the iPad and bird books on it, as you can select your location and eliminate all the birds not likely to be seen in your area, especially useful when we moved to Arizona.

Sam is the object that has changed the least, a constant in my lap since he arrived late in 2007. Trixie arrived early in 2015, special props for stealing my seat as soon as I stood up and then curling up like she had been there for hours. At least now there aren’t as many protest squeaks when I take my seat back as there were in the early days. 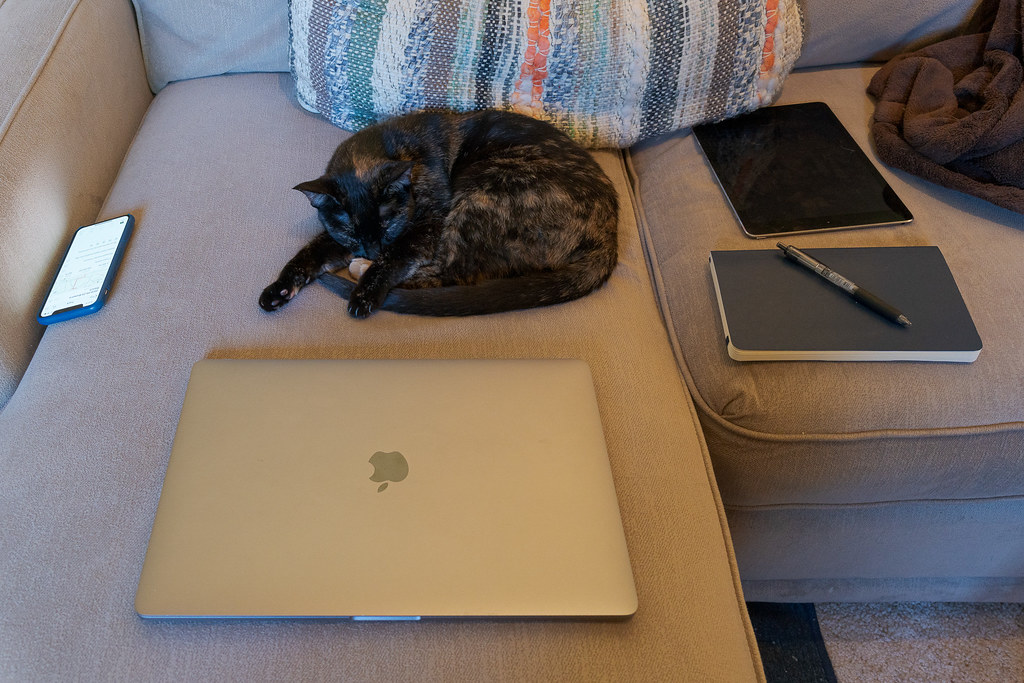 We’ve had cats for many years so I’ve long since gotten used to my spot being stolen if I get up for any reason. Even so, come on!

A bird in the hand is worth two in the bush.
English proverb

A bird book in the hand is worth two in the house.
Boolish proverb

When I’m about to make a big purchase, I make an equally big spreadsheet comparing the pluses and minuses of each option. Computers, cameras, lenses, cars, houses, doesn’t matter, there’s always a spreadsheet. Until now. Until the iPhone.

Even without firing up Excel (or lately, Numbers) to map out the alternatives, I knew the iPhone 4 was the one to finally replace my ancient and little-loved Sony. I’ve been playing with it for a few weeks now and I have to say the little thing really tickles my fancy.

It probably won’t surprise you to learn that the first three apps I’ve purchased are all related to birds.

When I ordered the phone, I knew there were birding apps for it but I didn’t know which ones. So I did a little happy dance when my wife informed me that the Sibley guide was available for the iPhone. The Sibley guide is my favorite of my four printed field guides because of the breadth and depth of the illustrations, but it’s also the largest and heaviest so not the one I carry into the field.

On our recent trip to Maine, I brought my second favorite guide, Kenn Kaufman’s excellent guide. But it was left behind in the hotel room when we went out to visit a relative, who it turns out had hairy woodpeckers coming to her feeders. There was a male and female and another similar bird, but with an orange patch on top instead of a red cap in back. Was this a juvenile hairy or another species altogether?

We consulted a bird guide at the house but it didn’t provide any clues. Even my book back at the hotel didn’t provide the answer. It wasn’t until I got back home that the Sibley guide showed not only the location of the juvenile’s patch but also the clue about the color.

With the iPhone app we would have known the answer straight away. And to top it off, the guide includes a lot of audio files so I can better learn to bird by ear. I was convinced of the need to improve in this area while taking a guided tour offered by the Audubon Society in Maine, I was stunned at how readily the leader could pick out birds by song.

When I’m at home, I’ll still prefer the printed guide, but I’m terribly excited now that I can carry hundreds of birds in my pocket.

Next up was Angry Birds, a game where you use a slingshot to toss birds at the creatures that stole their eggs. It’s a delightful little game but would be even more fun if you used a black lab to toss hedgehogs at the creatures who stole her food. Just a suggestion.

The next app not only has birds like eagles and falcons and cardinals, but other wildlife like bears and panthers and rams. I still have a big learning curve but I’m looking forward to playing Madden NFL 2011 as I start riding the train again.