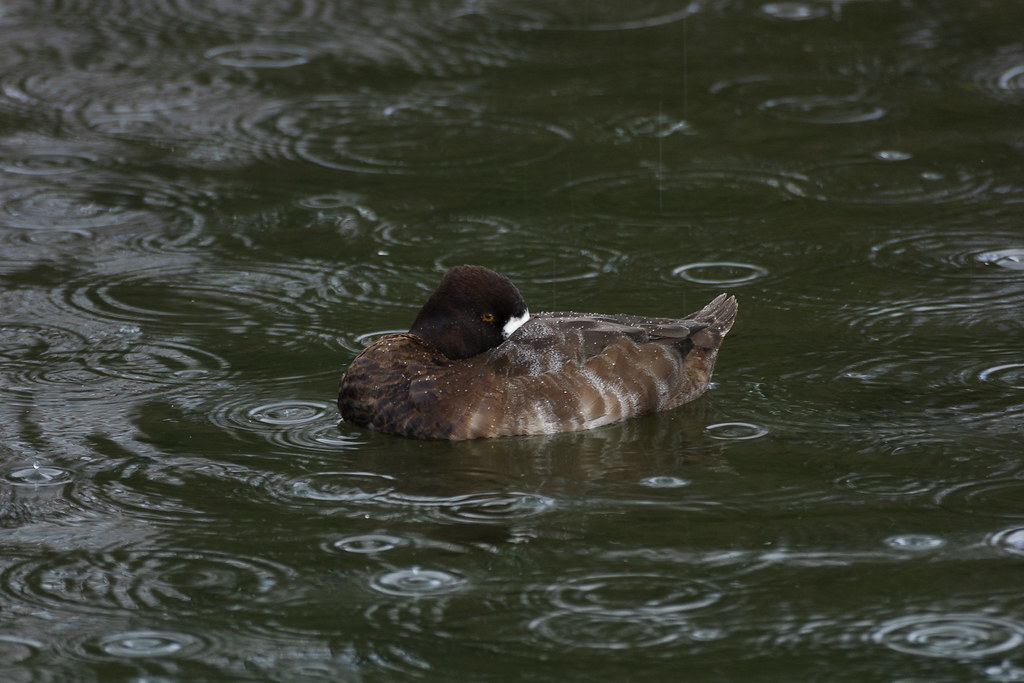 The pouring rain forms concentric circles around a female lesser scaup as she gets some rest as she swims. Taken in February 2003 with my Canon D30, an expensive camera with no weather sealing, but I’ve long loved photographing in the rain. 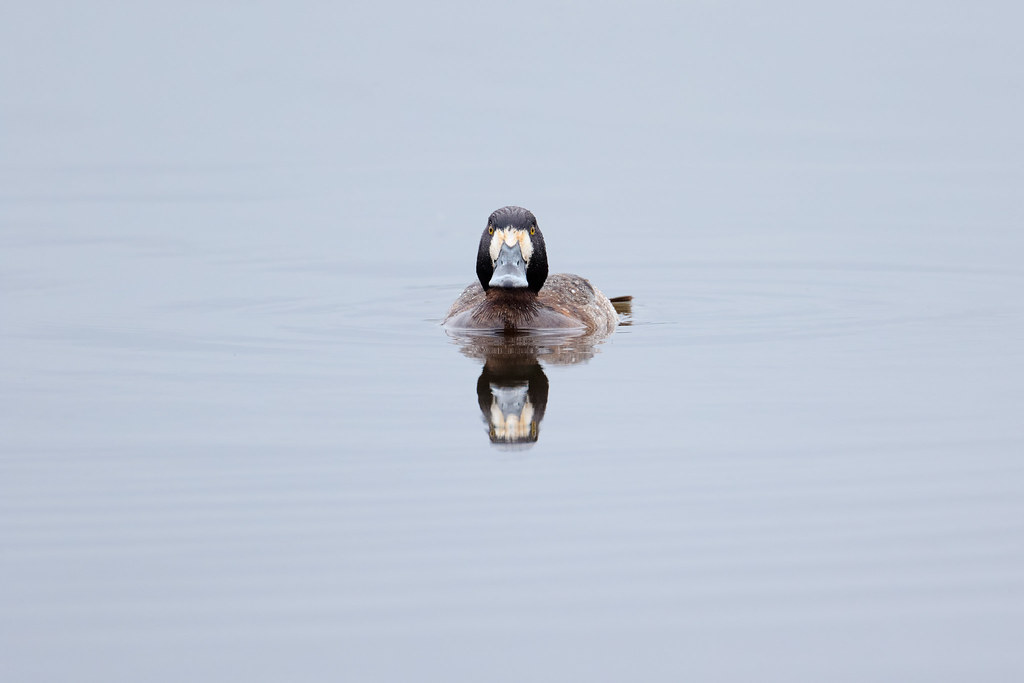 There is much of me in this simple portrait of what may be my favorite duck. Not lesser scaup in general, but this particular duck. Over the past handful of years I’ve spent many hours sitting at Horse Lake watching a female lesser scaup dive for food. I don’t know that it’s the same individual from year to year, or even visit to visit, but I’m a little disappointed if I drive by and she’s not there.

Many photographers only like to shoot on sunny days but I also love days like this, the typical winter day of the Northwest, heavy overcast with an occasional gentle rain. I often won’t go to the refuge on sunny days since it brings out the crowds, but if it’s raining I can sometimes sit quietly and enjoy the subtle beauty of this seasonal pond without the constant noise of cars driving by (or idling while parked behind me). The scaup often hangs out on the far side of the pond but if there isn’t much traffic she’ll swim over and feed near the road.

While there are often other ducks present, she’s usually the only scaup. Perhaps she enjoys the solitude of the place as much as I do. She’s tucked her feathers tightly against her head, a sure sign that even though she just surfaced, she’s about to dive underwater to feed again. 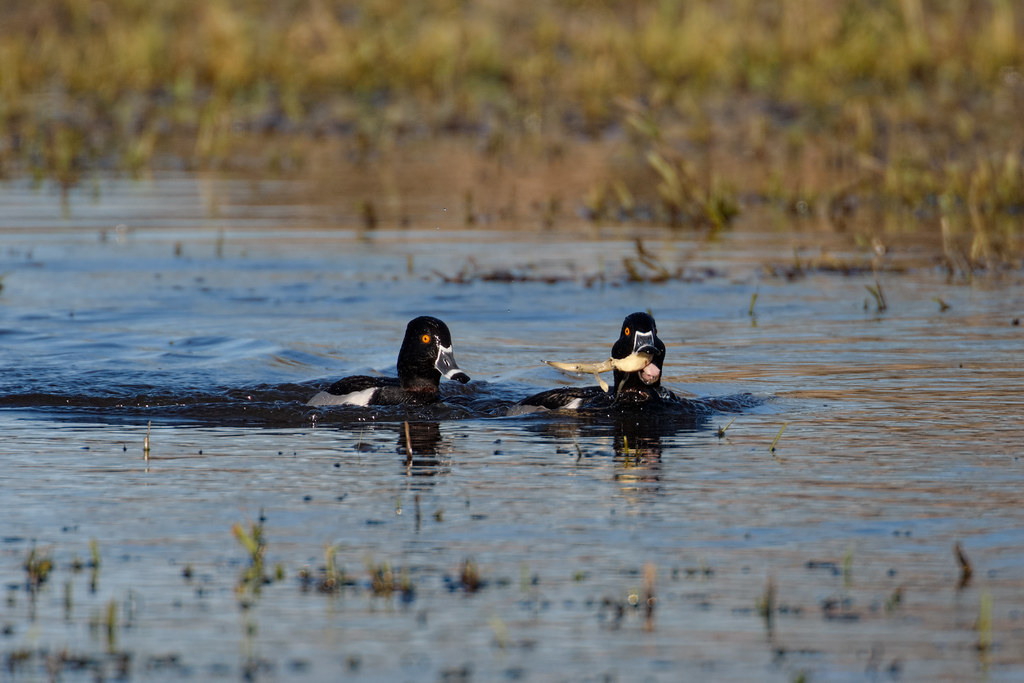 Sometimes animal behavior seems all too familiar to our own.

A small flock of ring-necked ducks was diving under the shallow waters of Bull Lake to feed, sometimes bringing up what I’m guessing is the root of an aquatic plant. Whatever it was, the ducks were very fond of it, and the one that surfaced with it would swim away from the others while trying to quickly eat it, all while any nearby ducks would try to swim over and steal it and eat it for themselves. I wasn’t sure which of these two males actually surfaced with the plant but the chase was on.

While in a mad dash to escape with his food, the ring-neck swam directly over a lesser scaup as she was surfacing, leaving her rather startled but none the worse for wear. He held onto his prize and was able to eat it at last. 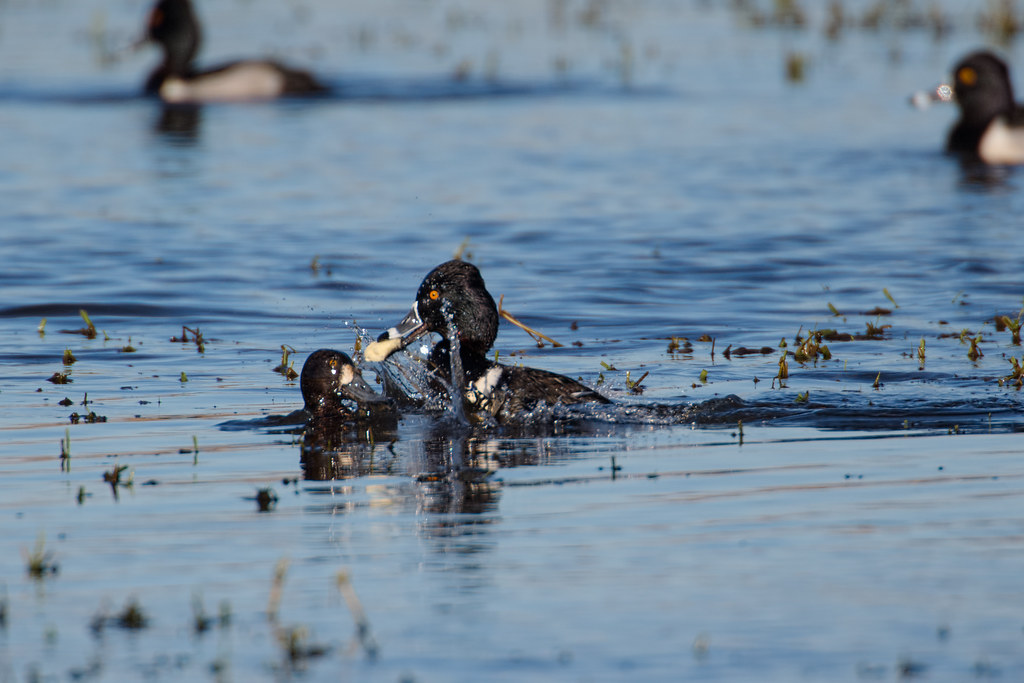 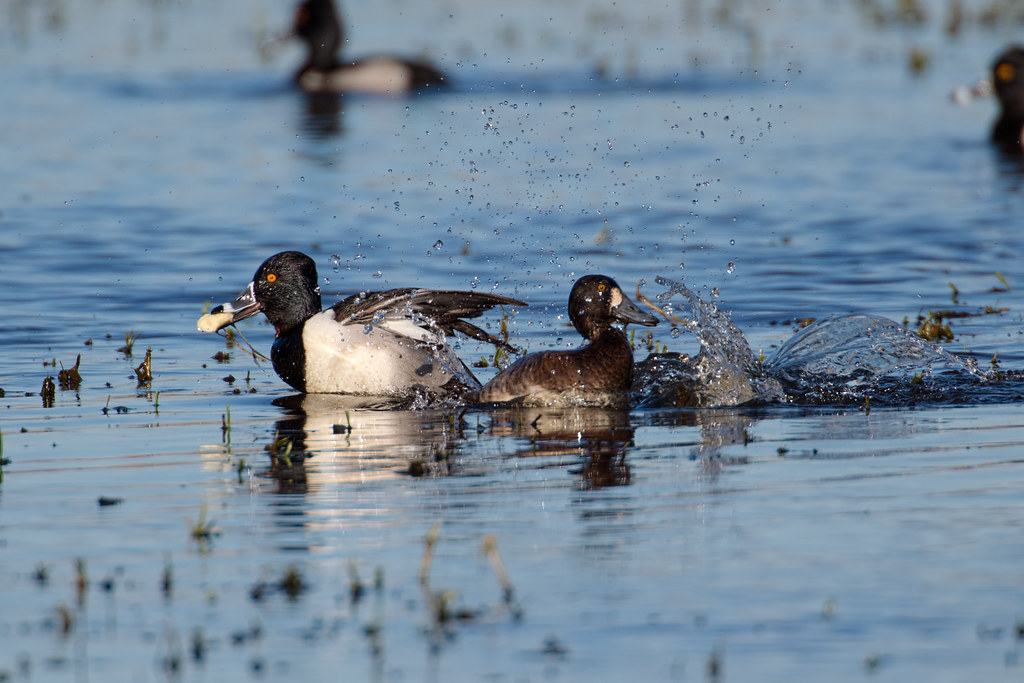 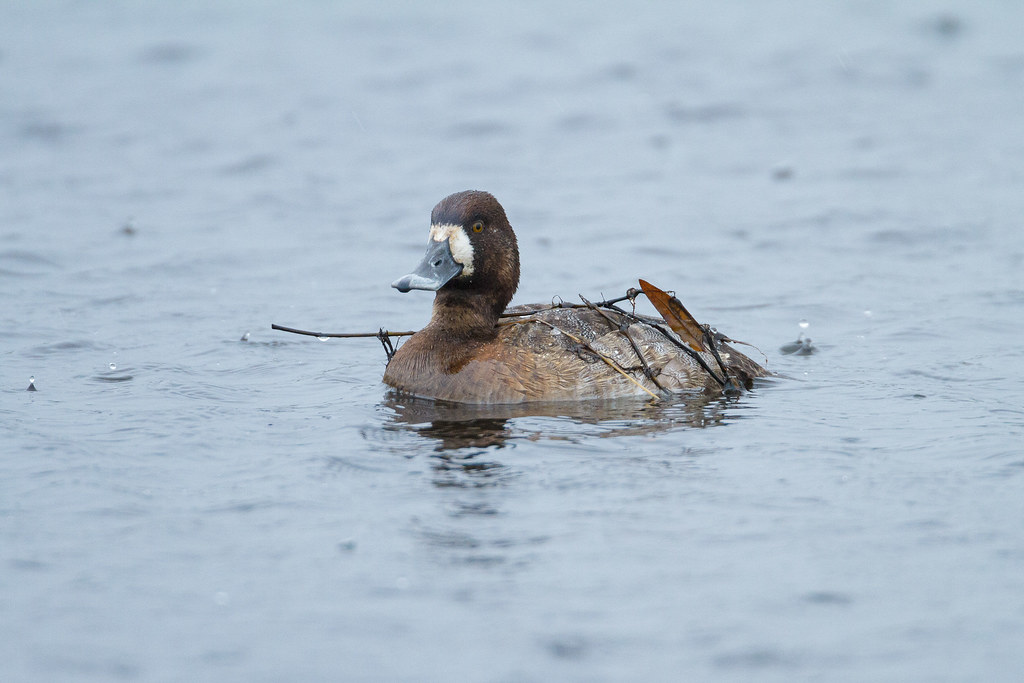 I’ve often thought about creating an album called “You’ve Got a Little Something …” to highlight animals that are carrying around a bit of their environment they picked up along the way. Diving ducks like this lesser scaup sometimes surface with plants that snagged on their back during their last feeding foray, but they often shed them on their next (as happened here, she surfaced after her next dive with a clean back). 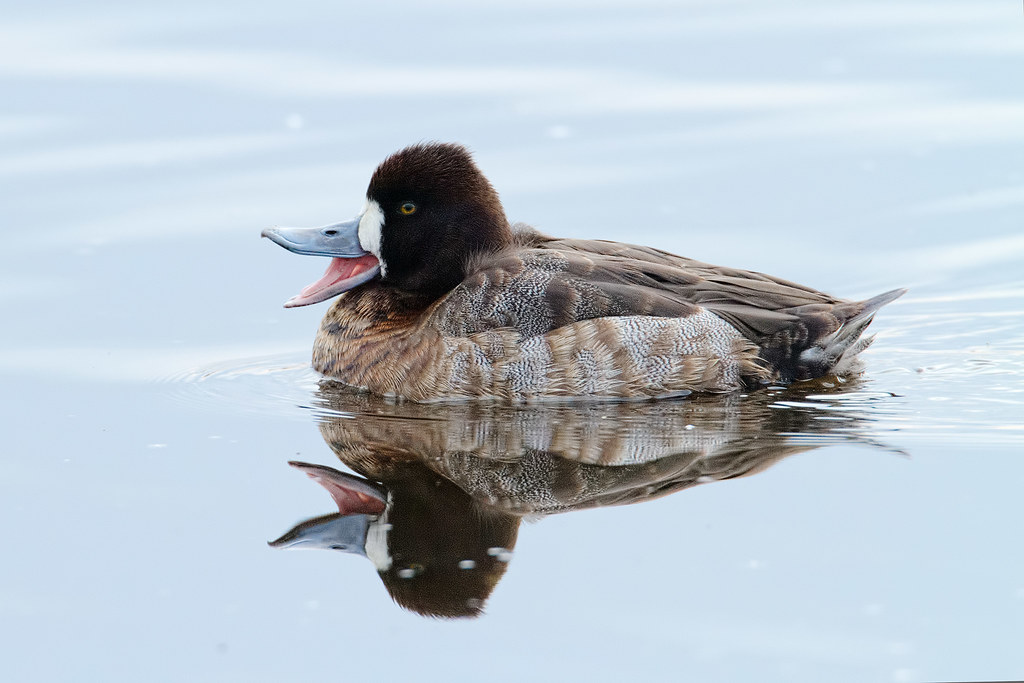 Over the past few years I’ve noticed there’s a lone female scaup that sometimes hangs out at Horse Lake. I don’t know if it’s the same bird from year to year, and she often hangs out at the far side of the lake, but it’s always a treat when she swims in close. Unfortunately in this instance I had been photographing diving coots and ducks and to get a high shutter speed was shooting at ISO 3200. That’s higher than I like to push the 7D and the technical quality of the picture suffers a bit for it, but since she was yawning it provides a nice change from my other pictures of her. 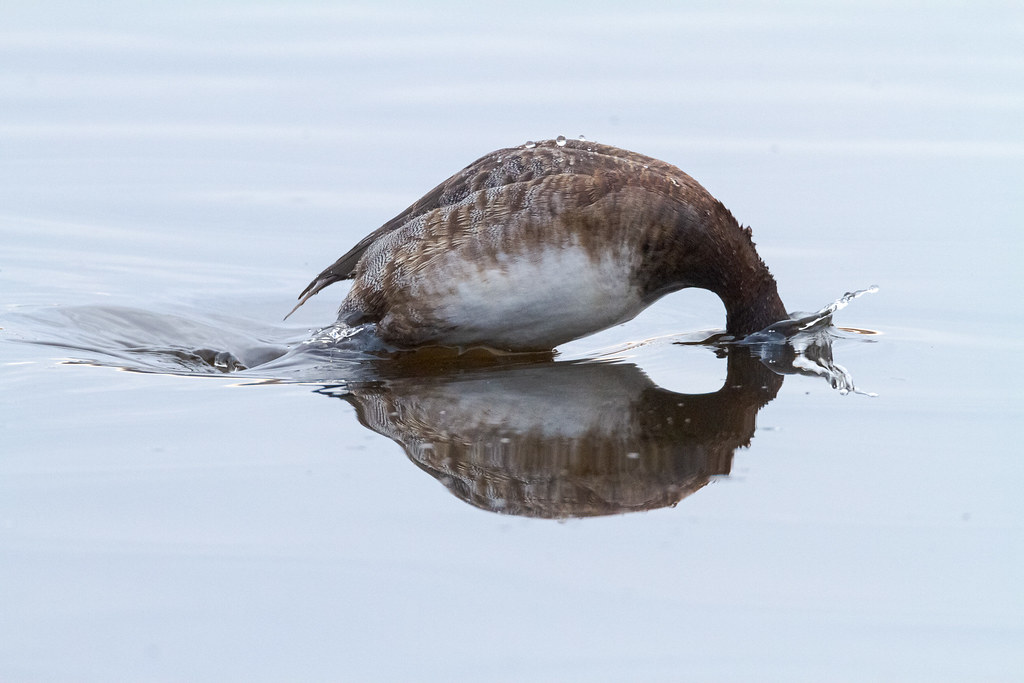 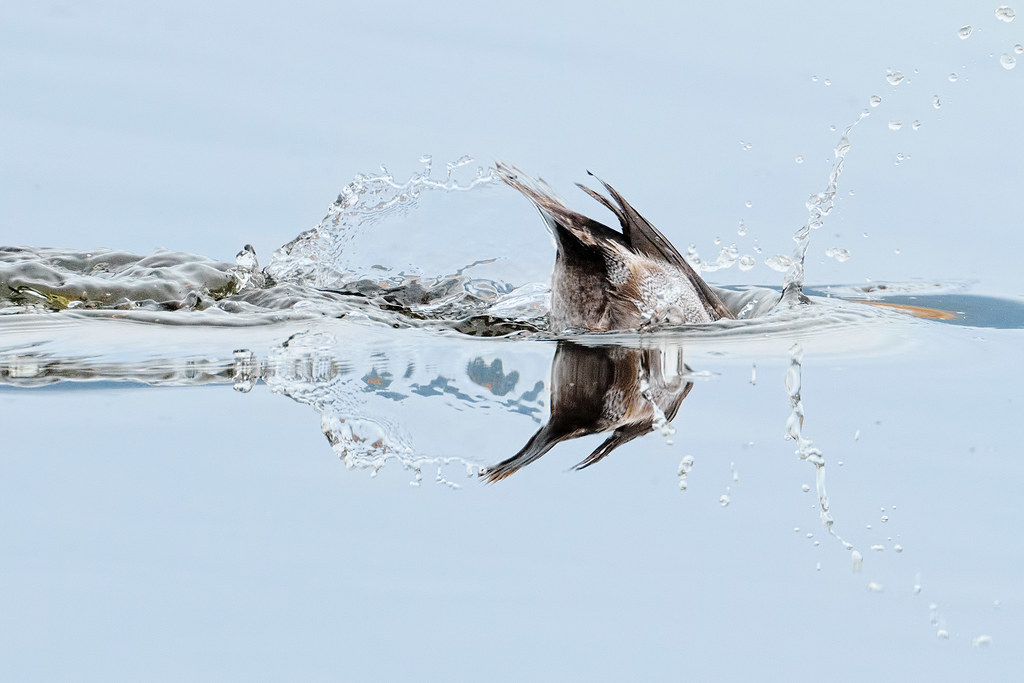 This is the tail end (literally) of a female lesser scaup diving head first under the water, water spilling off of her flattened tail in the back and splashing away in front from where her beak broke the surface tension of the water. 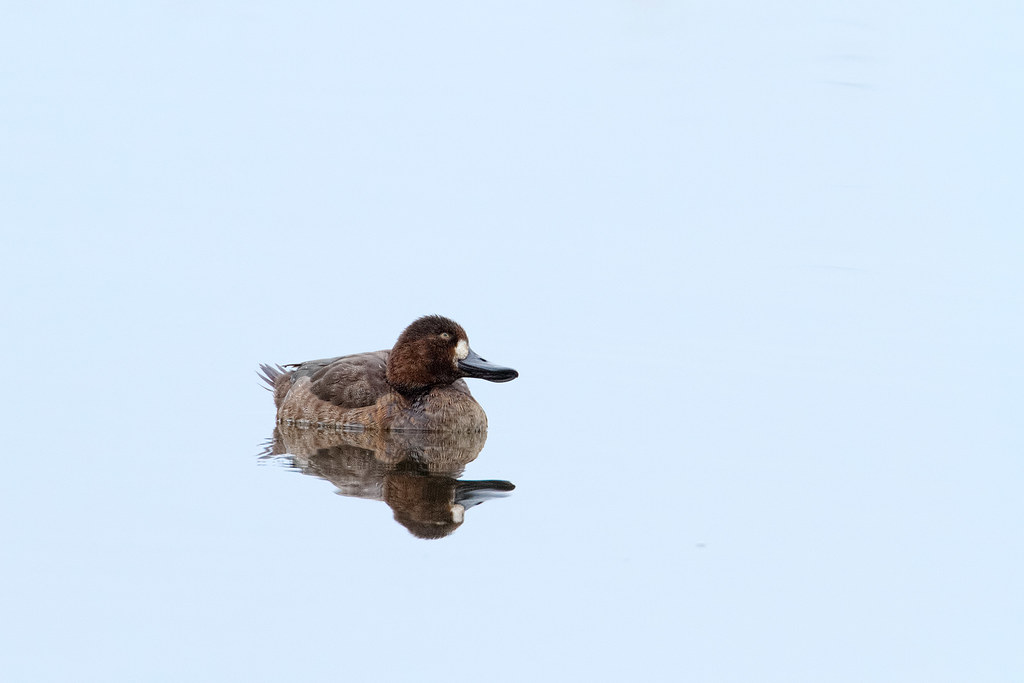 A female lesser scaup scans the skies while swimming in the soft light of a winter’s morning. I love photographing when the waters are this still and found her expression almost whimsical, but there’s a good reason the ducks keep an eye on the skies above Ridgefield.