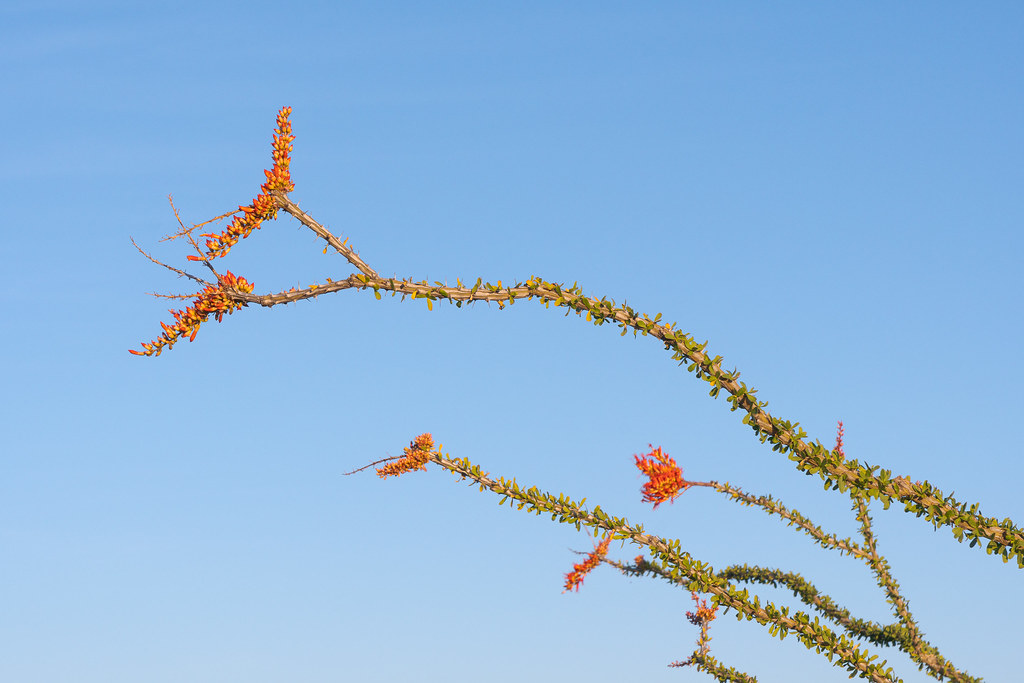 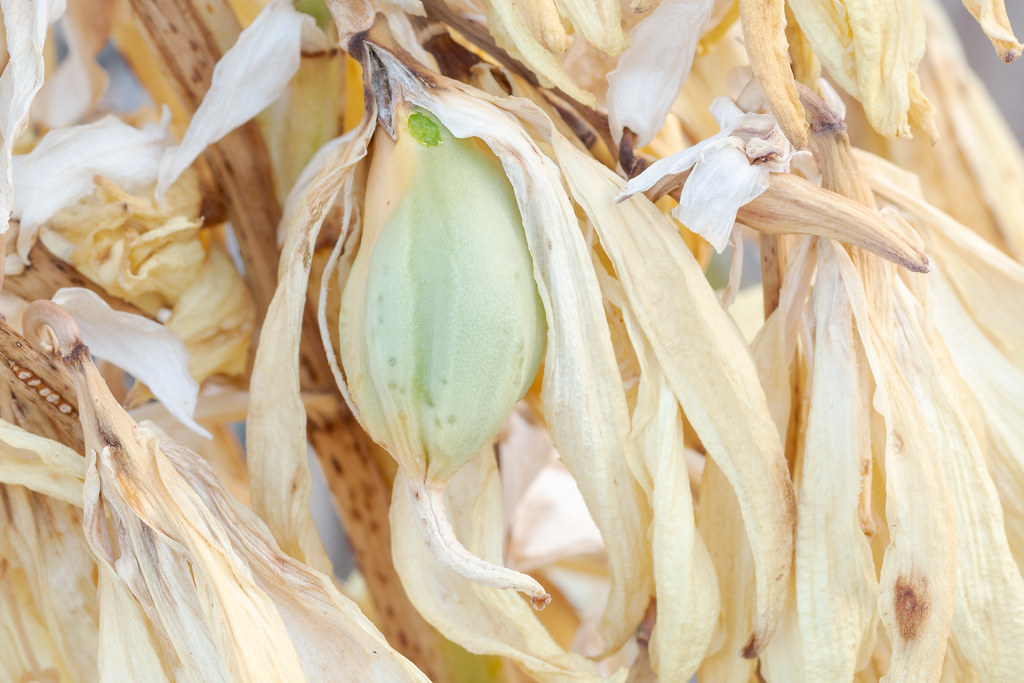 A banana yucca fruit begins to grow along the Upper Ranch Trail in McDowell Sonoran Preserve. I hadn’t photographed them last year when we moved to Arizona, I saw all and noticed little, but this year I realized how beautiful the entire process is from bud to flower to fruit. Towards the end of Ellie’s life I didn’t have much time for hiking when they were budding and flowering and after she died I wasn’t in the mood for photographing them regardless. I knew I was healing as the days progressed as though I initially walked past I came back and took the time to get out the macro lens and tripod and photograph the growing fruit amidst dried flowers in the soft light before sunrise.

I suppose it was a sign of my mental state that I posted this elsewhere but somehow it didn’t make it to the blog until now, not sure what happened. 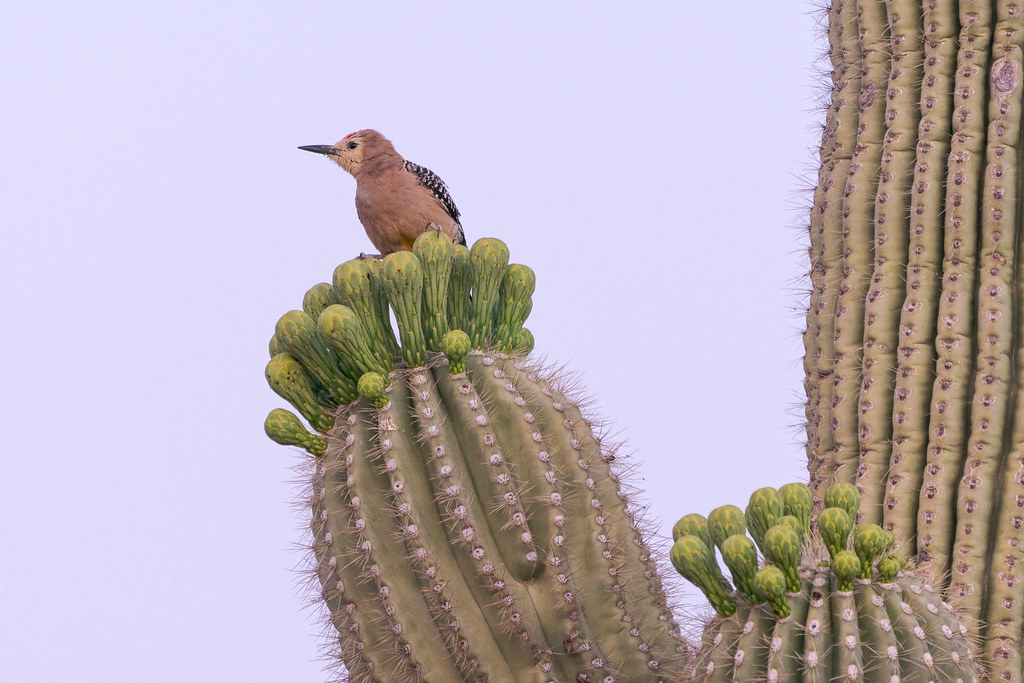 Thankfully I managed to get up at 4:30am on Friday, Saturday, and Sunday and was on the trails before sunrise, as that is how I met this Gila woodpecker shortly before the sun crested the hills behind me. Most of the saguaros old enough to bloom don’t have flowers yet but are putting out buds that make handy perches. Some of those buds have bloomed, however, as evidenced by the pollen covering the front half of his head. 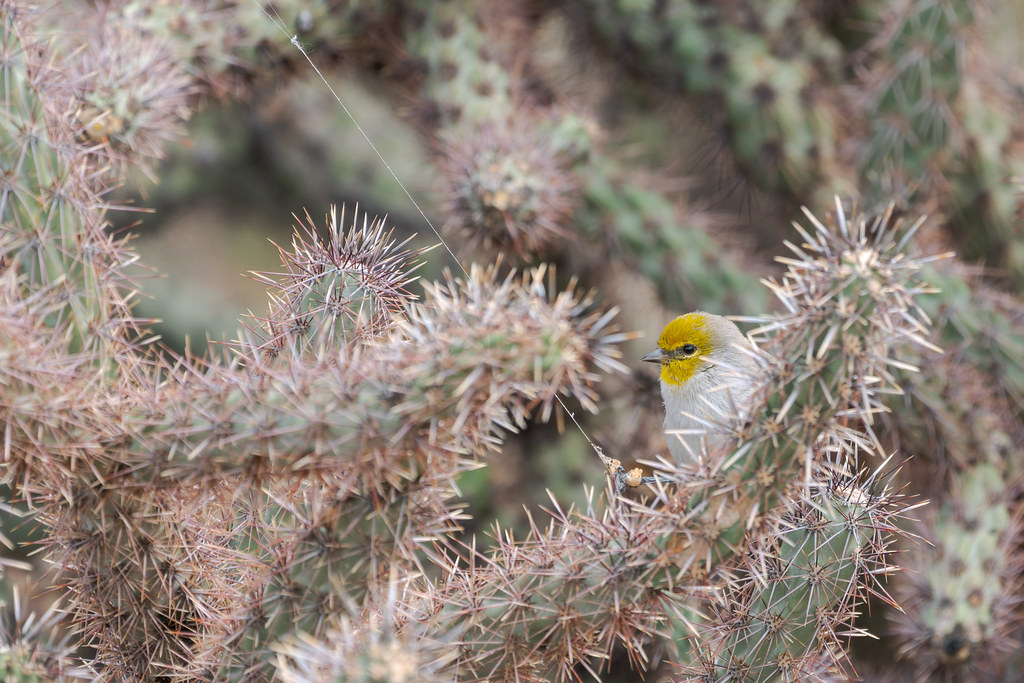 I only saw the aftermath but it looked to me like this verdin had grabbed a free meal from a spider’s web, but the web was so strong it kept the meal tethered to the cholla. Eventually by beating its wings and attempting to fly the webbing broke and the little bird was able to fly away. 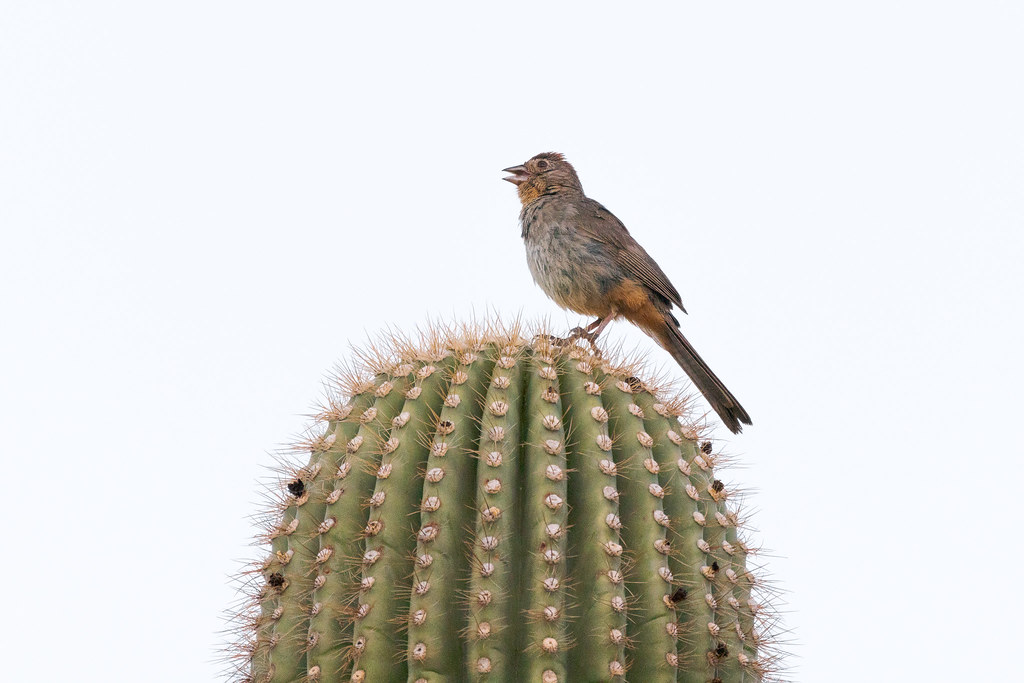 The sun had not yet crested the distant hills as this canyon towhee serenaded me atop a saguaro, a lovely reward for getting out of bed so early on the weekend. It was the only picture I took that day but it was a lovely day on the trails nevertheless. This morning I deliberately slept in as I knew I would be too tired to feel safe driving if I got up at 4 a.m. so I chose a good night’s sleep instead. I see many of the same birds in our backyard as on the trails (we even had a couple of Harris’s hawks perching in the palm trees recently) but with the towhees it’s a bit different, a pair of Abert’s towhees are regular visitors to our feeders but I’ve never seen them in the desert, while canyon towhees have never graced our yard but I’ve seen them many places around the preserve. 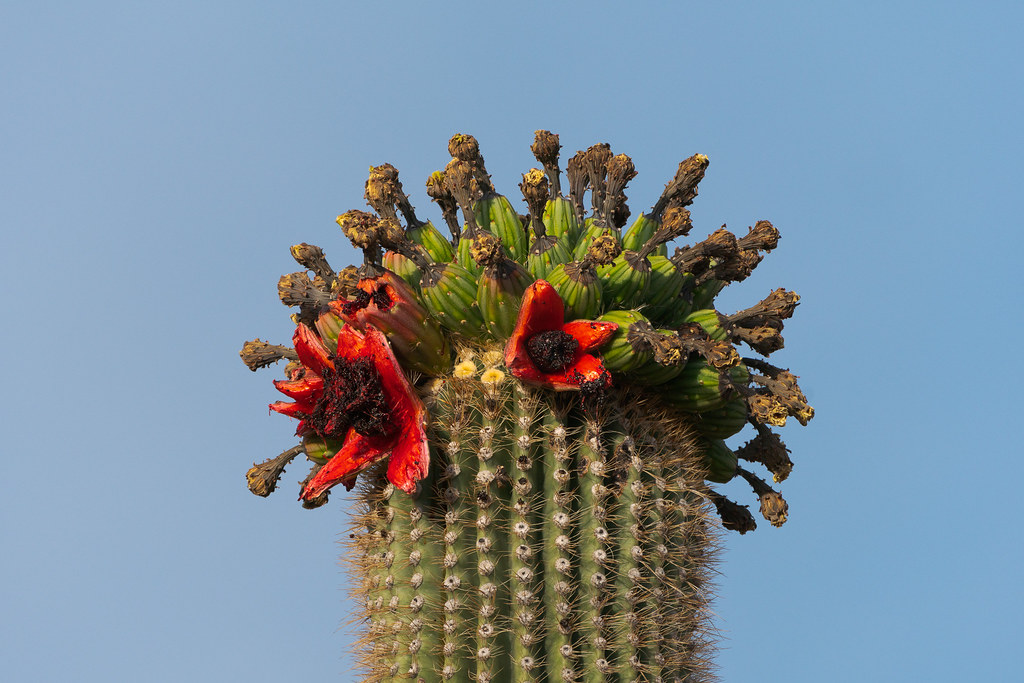 I knew even before setting foot in Arizona that my pictures in the desert would draw heavily from a palette of browns rather than the green of the Pacific Northwest. I didn’t know that there would occasionally b red in the desert too, such as the red racer, the house finch, and the northern cardinal. However, for a month or so at the end of spring and the start of summer red explodes across the desert in the fruit of the saguaro. 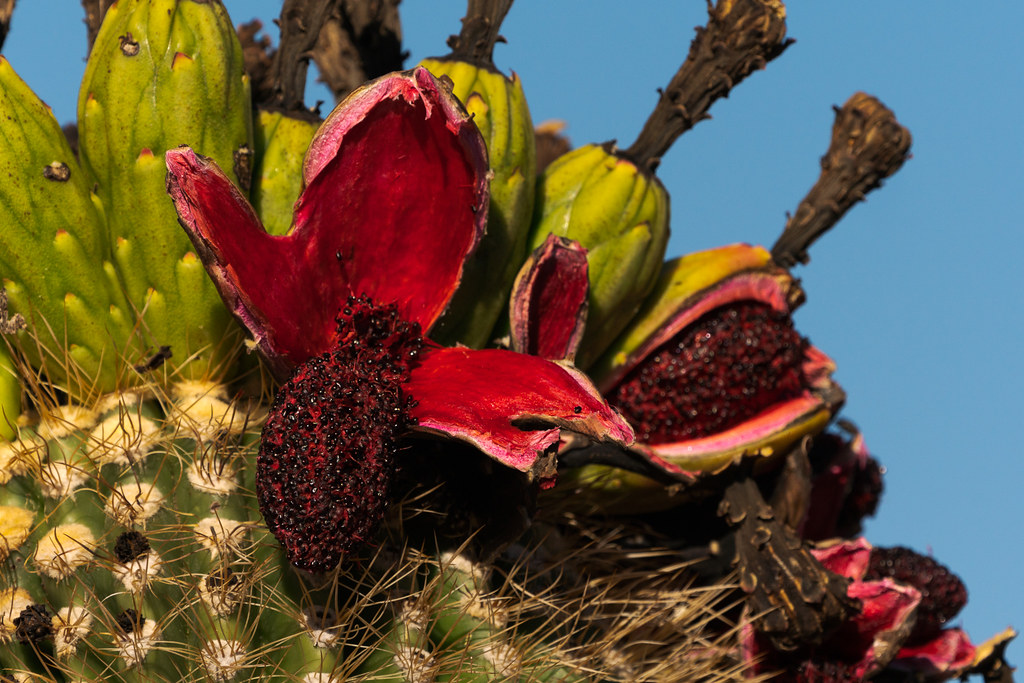 Here near The Amphitheater in McDowell Sonoran Preserve a ripe fruit bursts open, exposing the pulp and seeds inside. The fruit is chockfull of seeds, according to the National Park Service there are about 2000 seeds per fruit. Few will develop into a seedling and fewer into an adult saguaro in the harsh desert climate but its not for lack of trying. I noticed multiple birds eating the fruit but mostly it was white-winged doves, who apparently digest the seeds rather than passing them in their waste like some other birds. They end up with so much juice and pulp and seeds on their faces that I imagine some of the seeds will fall to the ground as they preen, so perhaps all is not lost. 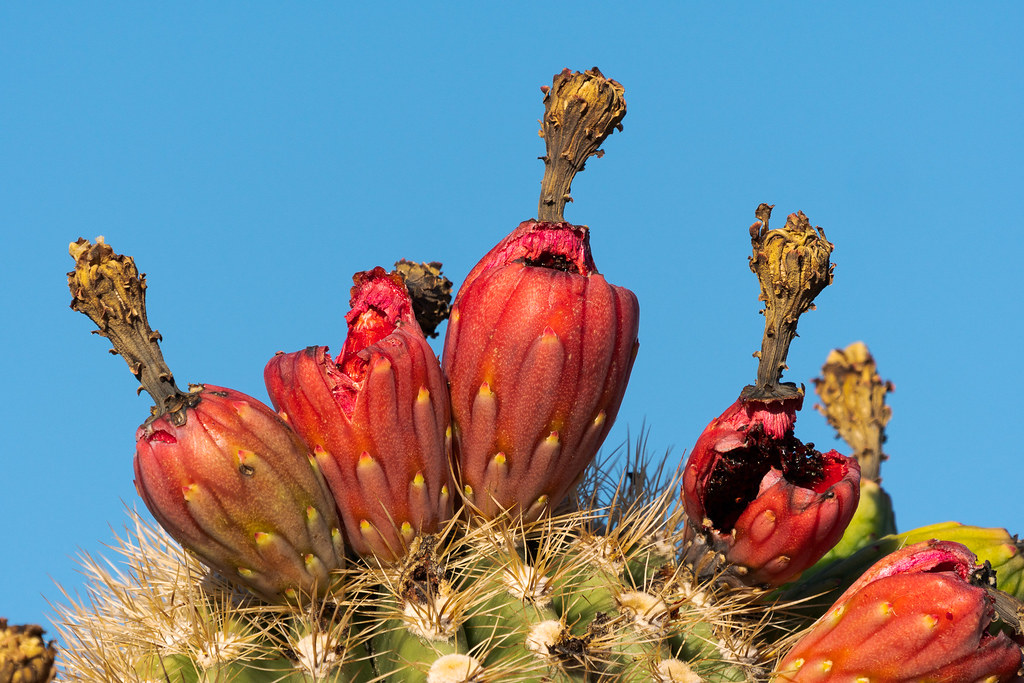 As the fruit continues to ripen on the saguaro, even the outside turns red. The dried stalk above them is all that remains of the flowers that grew atop them, the ripened fruit results from flowers that were pollinated. Most of the fruit grows at the top of the saguaro or the ends of its arms but some grows on the sides like the one below that has been cleaned of most of its contents by the denizens of the desert, only a few of the tiny black seeds remain inside. 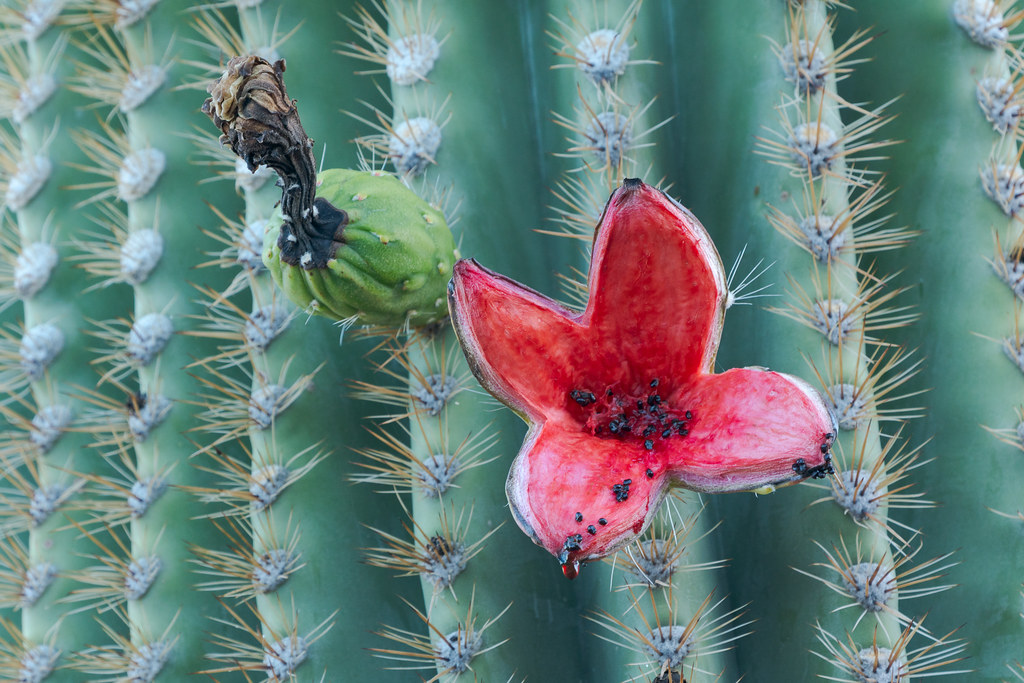