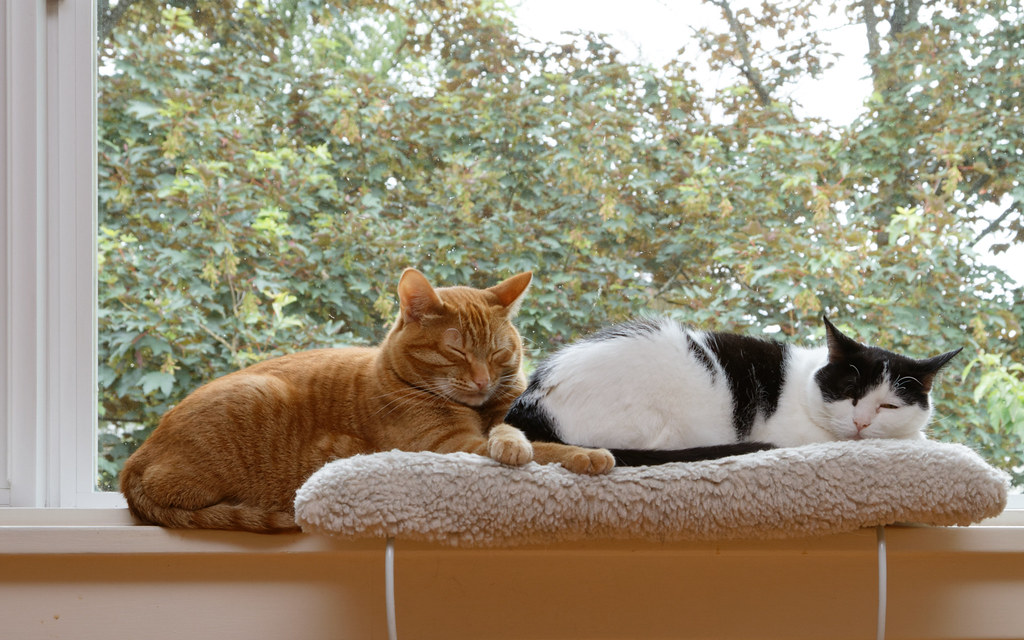 Another change I made to the Giving of Treats is to swap out the treat I give to Scout. While she still likes the WildSide Salmon dried salmon treats, she wasn’t eating them with the same fervor so I decided to mix things up a bit. I started off with Whiskas Wild Alaskan Salmon Flavor Temptations, a little treat with a crunchy whole grain shell and a meaty treat inside. Despite the name, the first ingredient is chicken meal and the wild Alaskan salmon flavor (whatever that is) is one of the last, but Scout loves them. She’s normally a bit picky about food so it’s nice to find another treat she gets excited about.

Sam likes them too, but that’s not too surprising, Sam likes just about everything. He has gotten more tolerant of Flea Medicine Night, a monthly ritual necessitated by Scout’s flea allergy, partly with experience I suppose and partly because I started giving the cats a few treats afterward to soothe their injured souls. Now instead of hiding from me for a few hours afterward, Sam has learned it is treat time and he doesn’t even resist his treatments with the same vigor that he used to — in other words, I don’t end up bleeding anymore.

Emma is another picky eater and while she likes the wet food she gets in the mornings, and sometimes eats the dried salmon treats, I have not yet found a dried treat she will consistently eat. I picked up a couple of new Temptations flavors, Free Range Chicken and Yellow Fin Tuna, to see how they would be received. I had little doubt Sam would love them but really hoped Emma would take to them too.

On the latest flea night I assembled the three cats after their treatment, each a little irritable but each eyeing the treat bags I held in my hands. Emma didn’t like any of the treats, a disappointment but not a surprise, while Scout loved them all. The biggest surprise was Sam, who not only didn’t like the new flavors but actually spit them out!

Scout, who was learned well from her Snuggle Twin, body blocked Sam out of the way and devoured his spurned treats and Emma’s too, not a normal behavior for our gentle Queen. I guess it’s safe to say she likes these treats!

I have given her the Tuna flavor the last few days in the mornings, the first time after I handed her the last treat she swatted my empty hand with her paw. I thought it an aberration until she did it again the following morning. This morning though she just buried her head in my empty hand and rubbed her head through my fingers to capture any fleeing evanescences from the departed treats.