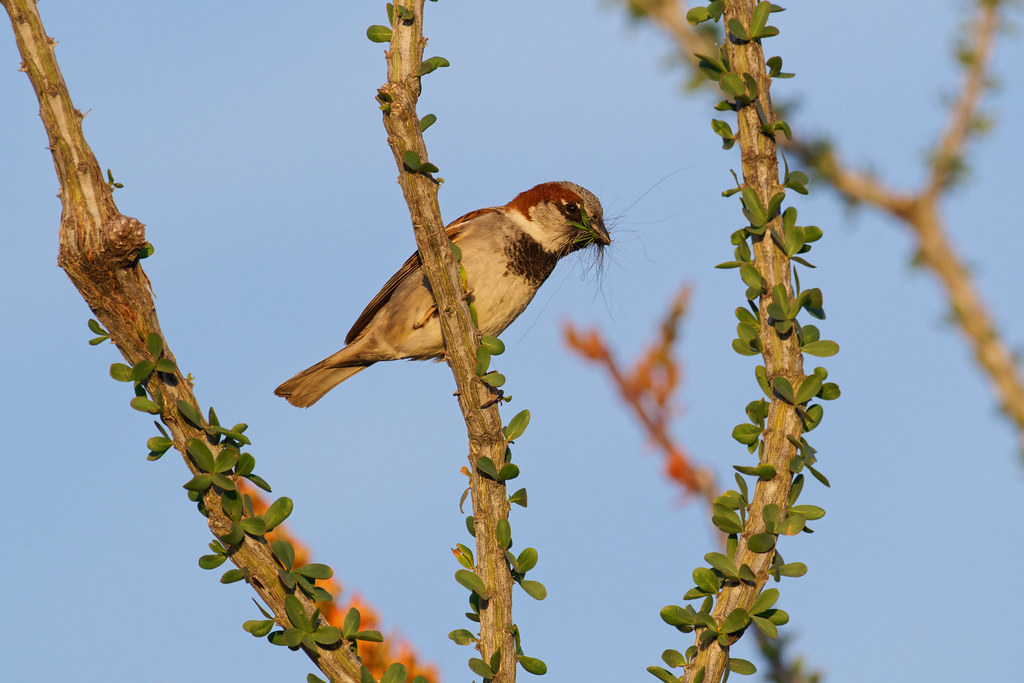 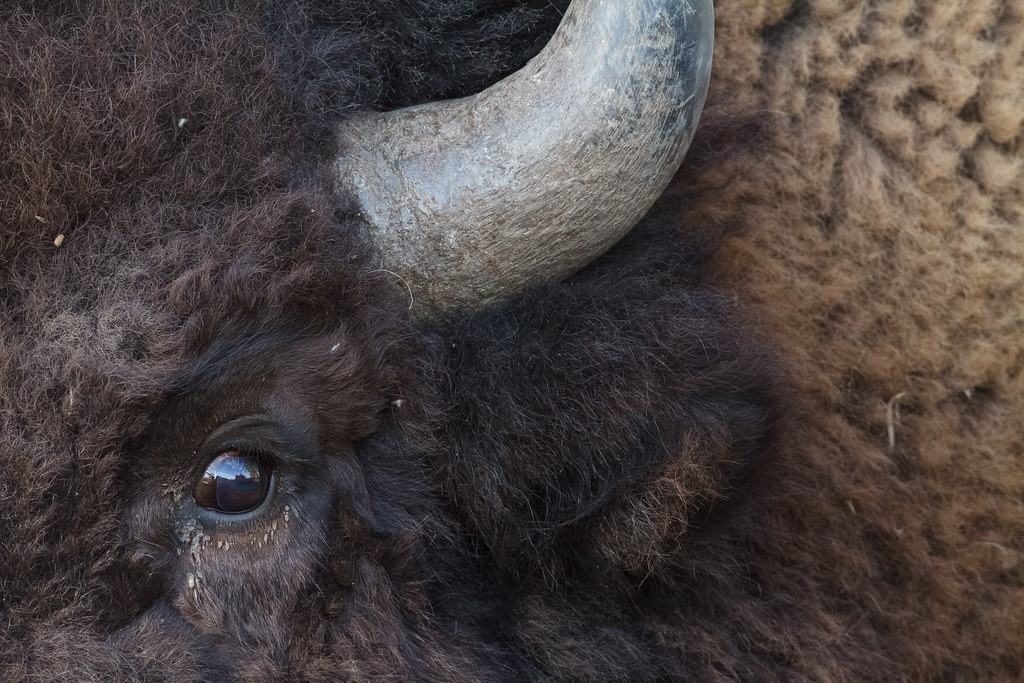 As I sat beside the road, playing around with close-ups of the mothers and their young, the old bulls eventually ambled into view. These would be my favorite shots from this trip in the fall of 2011, what I love most about this one is that even though I often think of them as being one shade of brown, I am reminded, bison contain multitudes. As was often the case in Wyoming, many of my favorite encounters would be on the trails but many of my favorite pictures would be near the road. I hope you had a good life, not-so-little one. 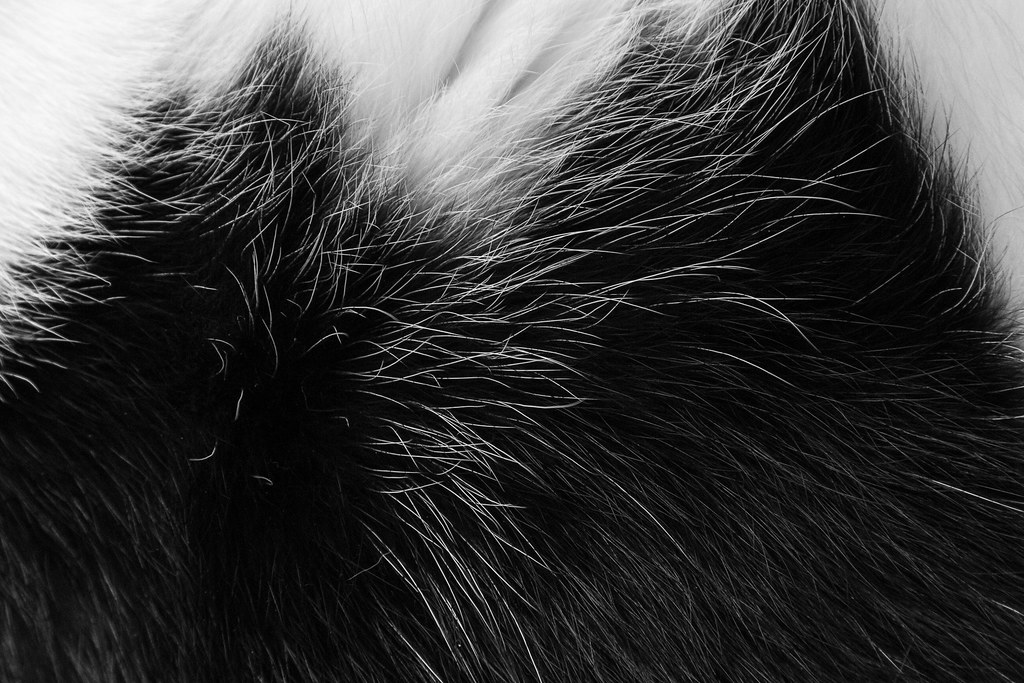 My constant companion in 2012, we lost Scout to cancer the following year. I loved the black-and-white patterns in her fur. 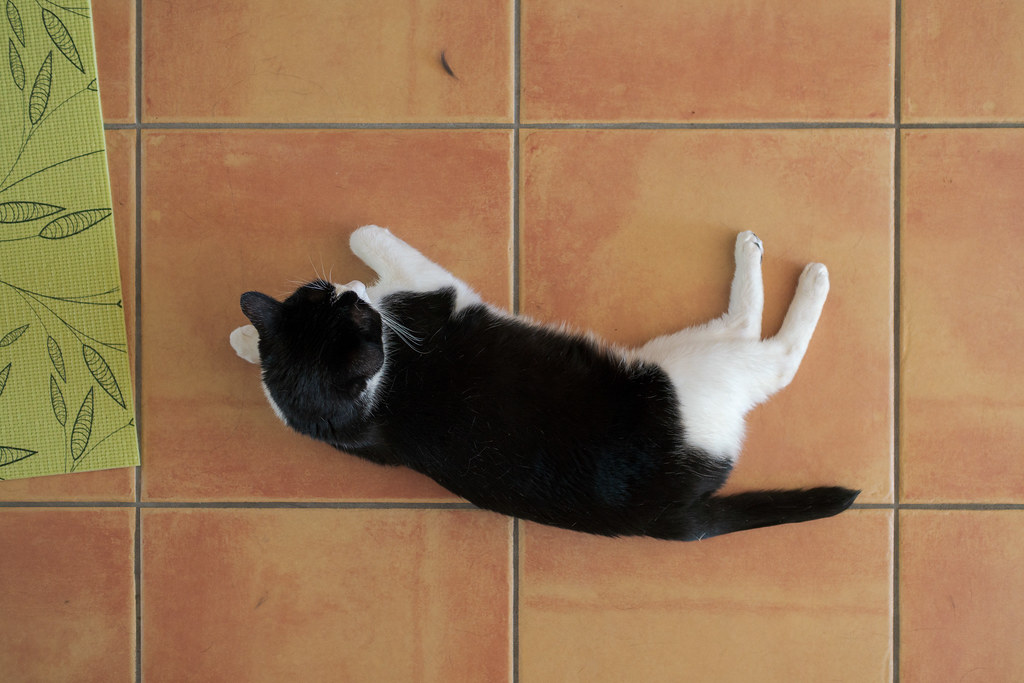 From last summer, Boo relaxing on the tile floor next to a clump of Ellie’s fur. About once a week you could have assembled another dog out of the fur she shed, especially when a new coat was coming in. Her coat was so soft, people at the dog park always remarked on it when they petted her, which was often as she loved meeting people. I have to admit my estimation of strangers dropped a bit if they didn’t at least give her a pat on the head. Her estimation of them dropped a lot if she sniffed their pockets for treats and found them wanting. When she was younger she’d first sniff them surreptitiously from behind but in her senior years she stopped putting on airs and got straight down to business. 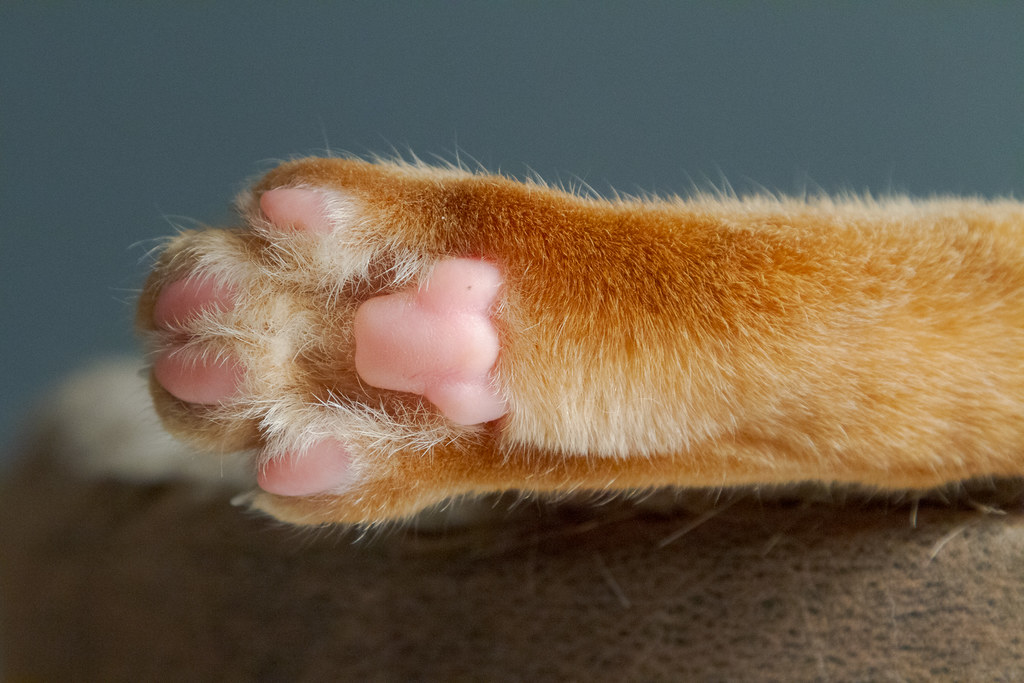 Is there anything better than the pads on a cat’s paw? 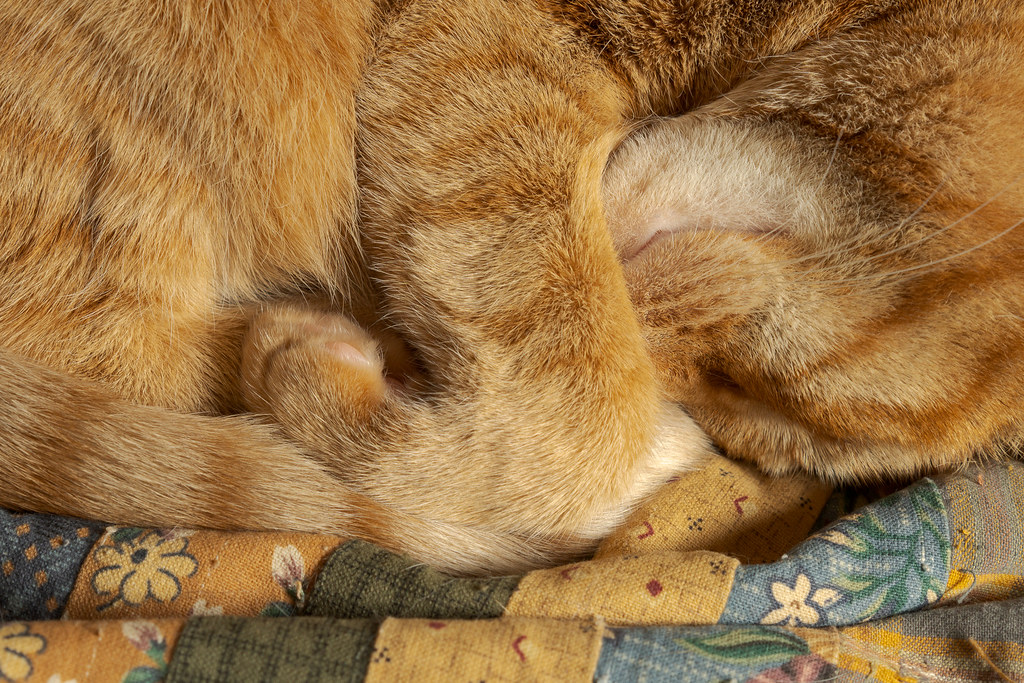 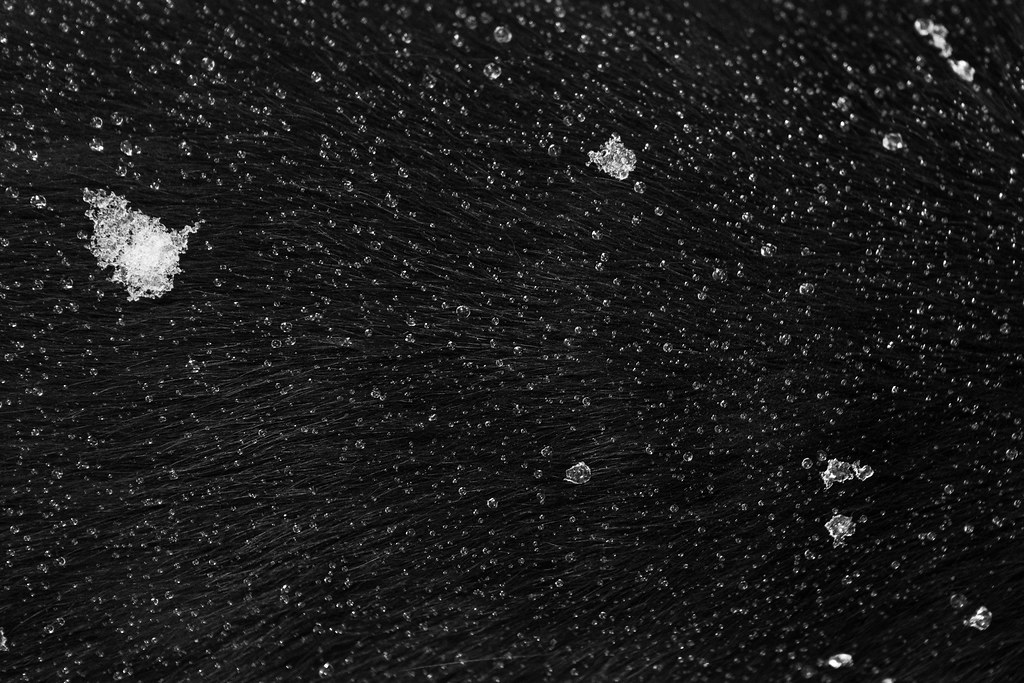 We got a few inches of snow in Portland on Tuesday, but with Ellie’s recent injury or illness she didn’t want to go for a long walk in it so I was surprised when she flopped down in the backyard and rolled around in the snow. I’m glad she got to enjoy it a little bit as I suspect this snow will be her last, not because she is in any imminent danger but because I have to choose now between two job offers, one in California and one in Arizona, and neither place gets snow unless you drive a ways to the mountains to look for it. 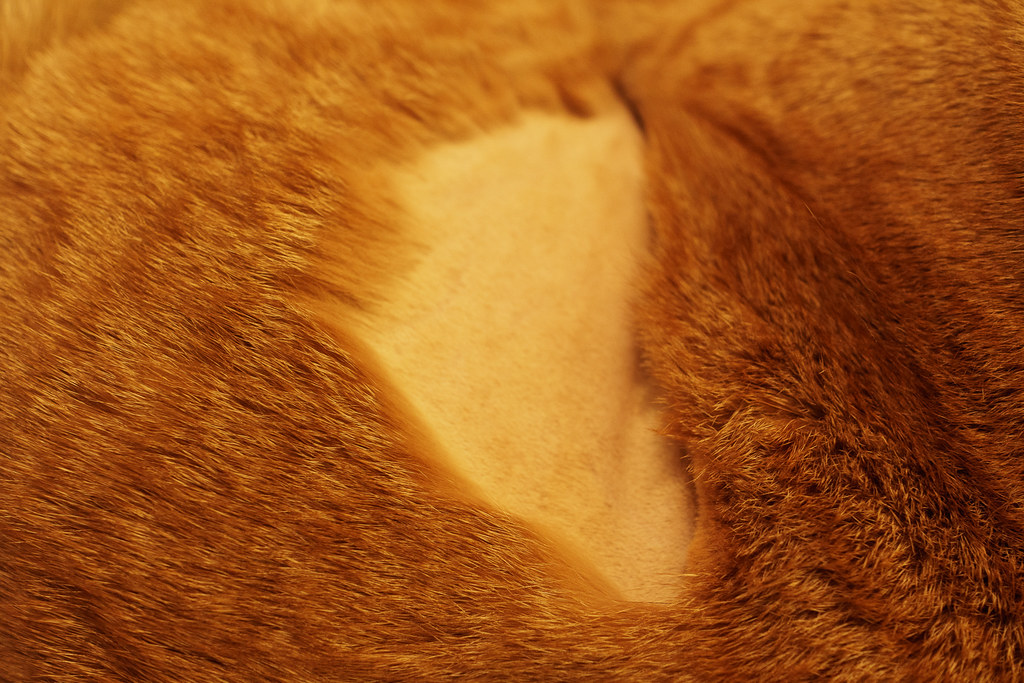 Sam visited the specialist on Monday and got his belly shaved for an ultrasound, which thankfully didn’t show anything alarming. Because he’s not losing weight, she wanted to try Sam on a new food with lots of fiber before getting more aggressive with a biopsy. We’ll transition him off his old food and onto the new over the course of a few days, but so far he seems to like the new food just fine. 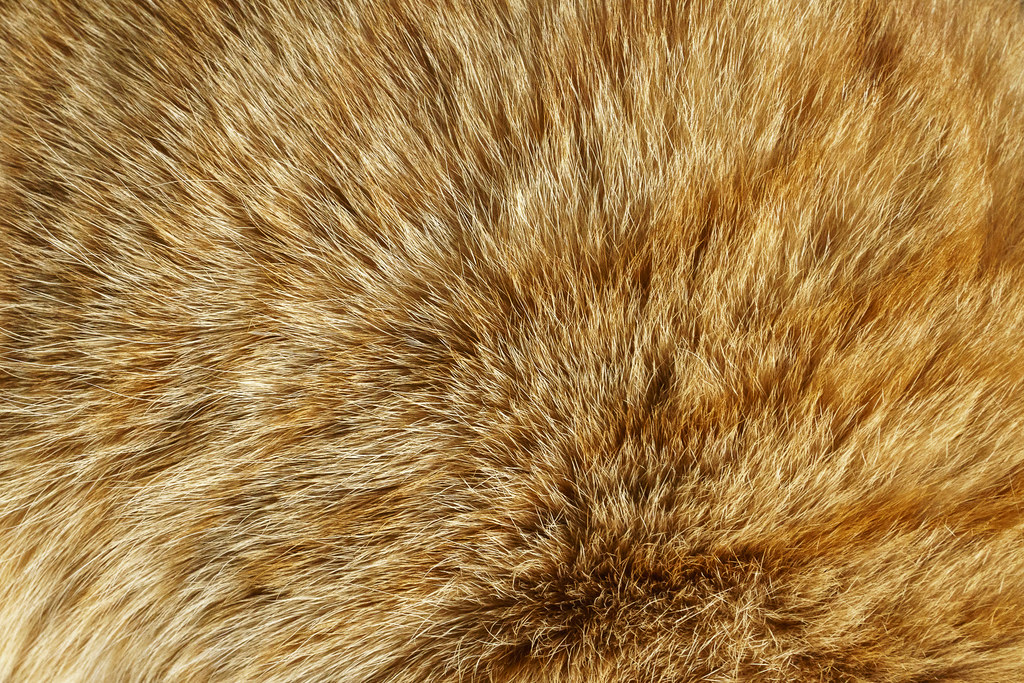 I always assumed the stripes of an orange tabby were all about camouflage but Sam says they also make him 18% faster. I’m not sure I believe him but on the other hand he can really scoot if he thinks he’s going to the vet. 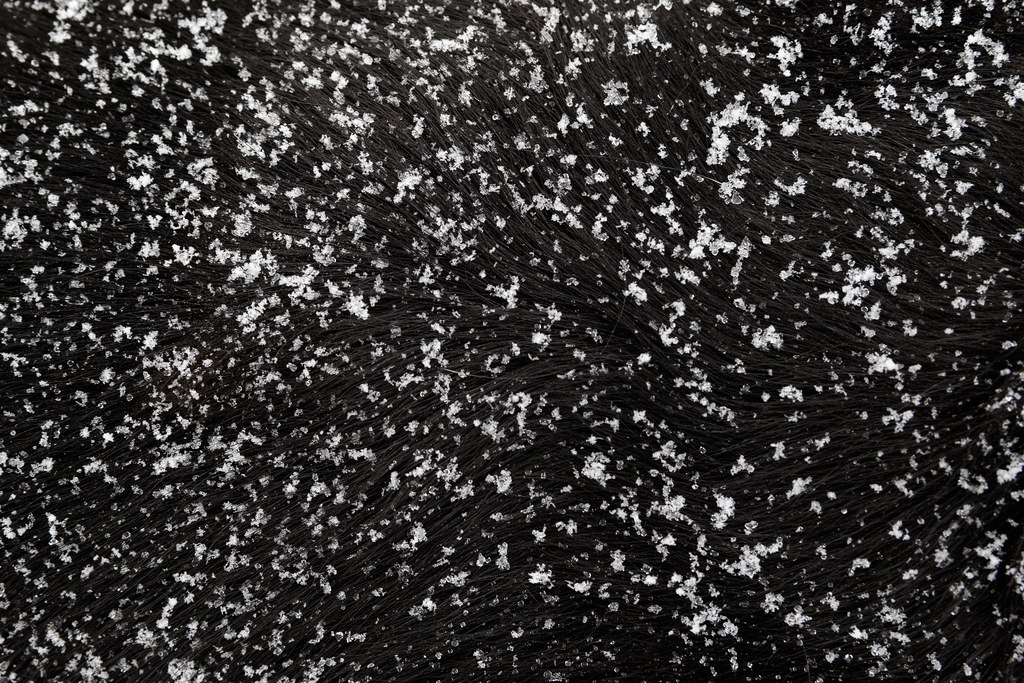 I took Thursday off since there was a chance of snow and I wanted to let our aging pup enjoy some snow time. The temperature was supposed to rise in the evening so the snow wouldn’t last and I had to seize the moment. I was hoping for big softly falling flakes but there was a strong wind that made pictures difficult, so mostly we just walked around the neighborhood. I did get a few pictures in the dog park, such as this close-up of snow on the black fur of her back.

Thankfully she went on a really long walk in the afternoon snow after a really long walk in the morning, as the evening didn’t warm as expected and instead we got freezing rain. Ellie despises ice as much as she loves snow and refuses to go for even a short walk when it’s icy. At her age I wouldn’t have risked it anyway and I just made a path for her in the backyard, but it did amuse me for the next couple of days while the ice lasted, when I let her out to go to the bathroom, she quickly did her business and then made a beeline back to the door, just in case I was under the delusion I might get her out for a walk.