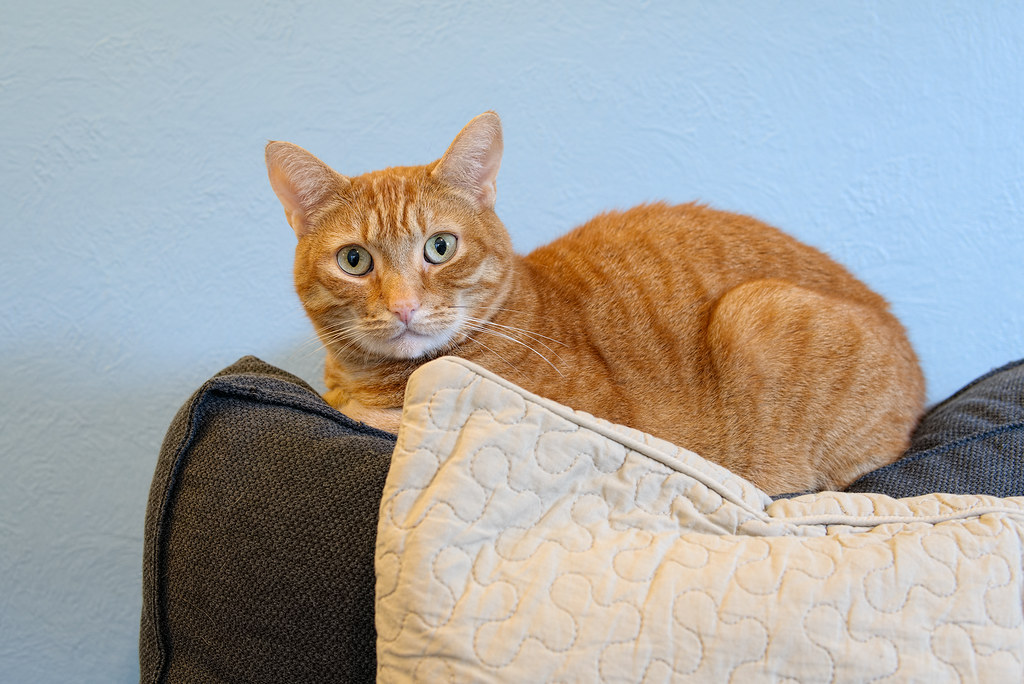 Sam would like me to point out that the cushion is sagging because it’s a bit floppy, not because he has a weight problem. And he’s correct, the vet was very happy with his weight on his last checkup, he’s right in the middle of his target range and so can lose or gain a little weight without worry. Trixie on the other hand they’d like to see put on weight but … 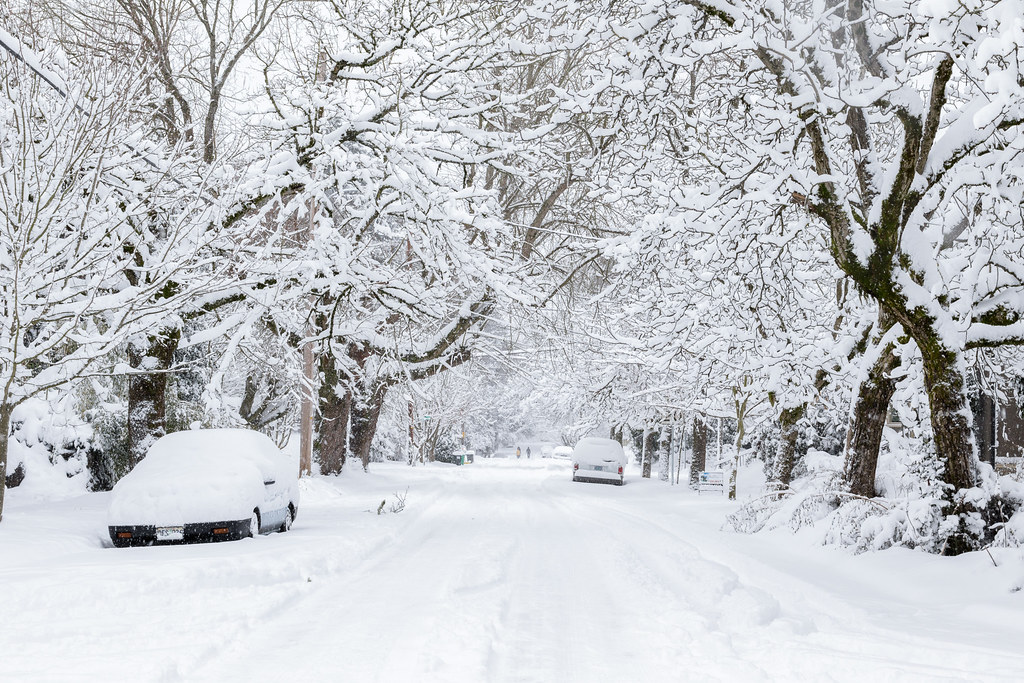 I used to think all city neighborhoods were a desert of brick and concrete and asphalt so I was surprised when we first started looking at neighborhoods in Portland to see so many tree-lined streets, such as Siskiyou Street here. I didn’t walk across Siskiyou much in the first seven years we lived here, just occasionally on trips to the store, as it is to our north and the train station for the light rail I take to work is to our south. In the last eight years however I’ve crossed thousands of times, as while it isn’t on the way to the train station, it is on the way to the dog park. 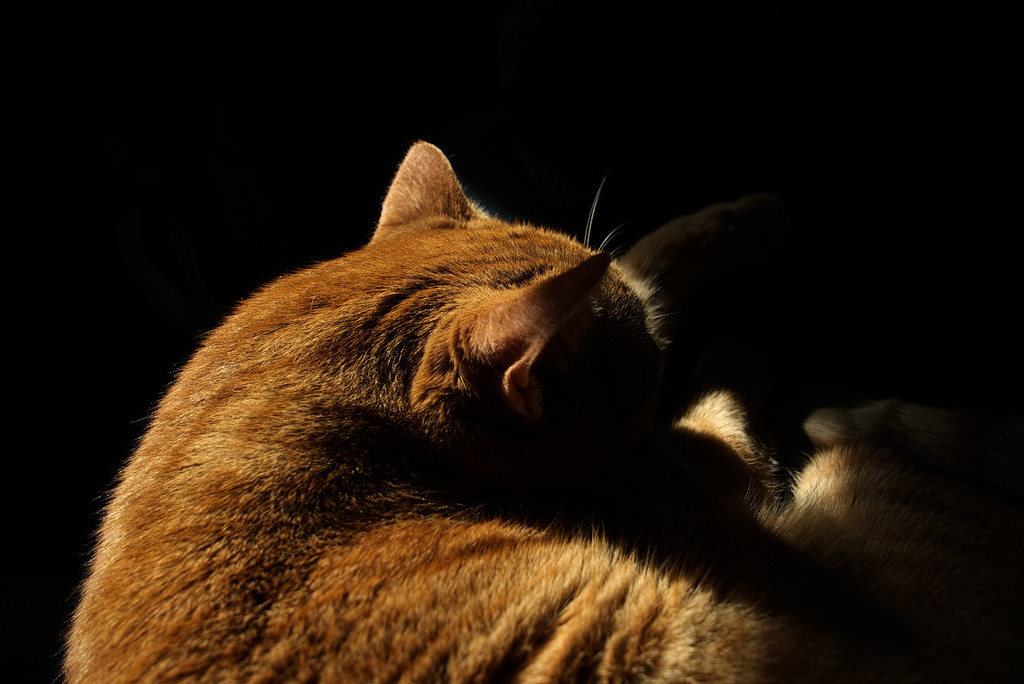 My daily view, Sam in my lap, although usually in less dramatic lighting. 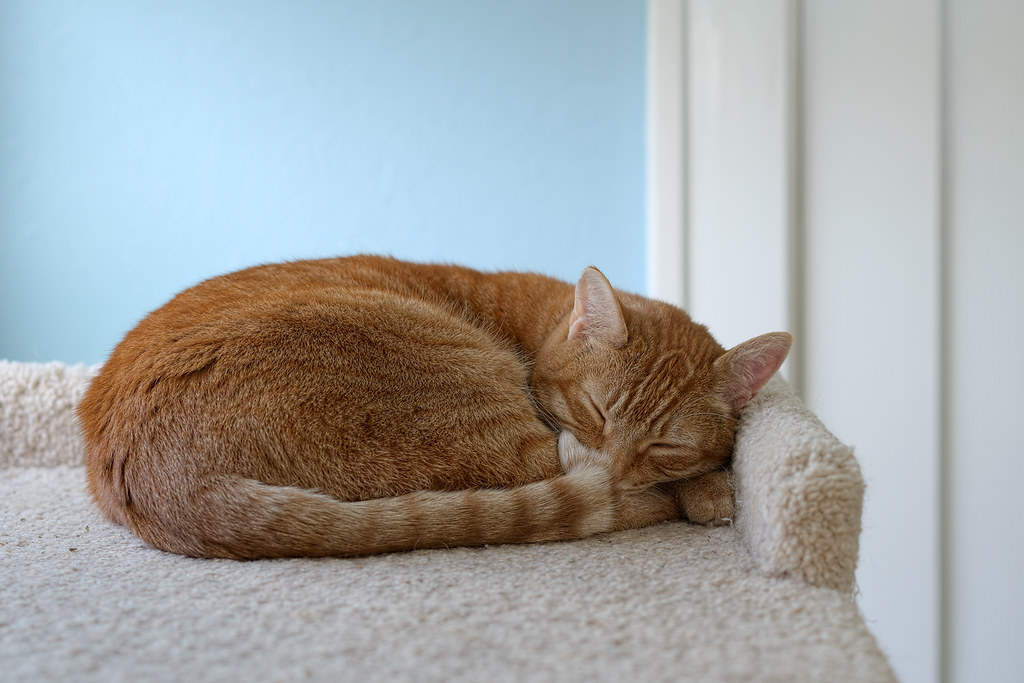 When I saw Sam sleeping on the cat tree in this lovely overcast light I grabbed the new camera (Sony A6500) and a new lens (Sony Zeiss 55mm 1.8) and took one of my favorite pictures of him, a simple portrait in soft light. I’ve admired this lens from afar since it was introduced a few years ago but wasn’t sure I’d use it enough to justify its price. It was both on sale and further discounted with a trade-in special so I decided to give it a go and am glad I did.

The camera also worked out well, I’m holding it over to my side as the TV is where I would have otherwise stood. The little on-board flash can be manually bounced so I used it to subtly fill in some of the shadows near his face that were caused by his body blocking the light. The image stabilization helped out since I was in an unstable position and the live zebras helped me quickly set the exposure to not blow out the back wall, so all that was left was to tap the touchscreen to set the focus on his eyes. 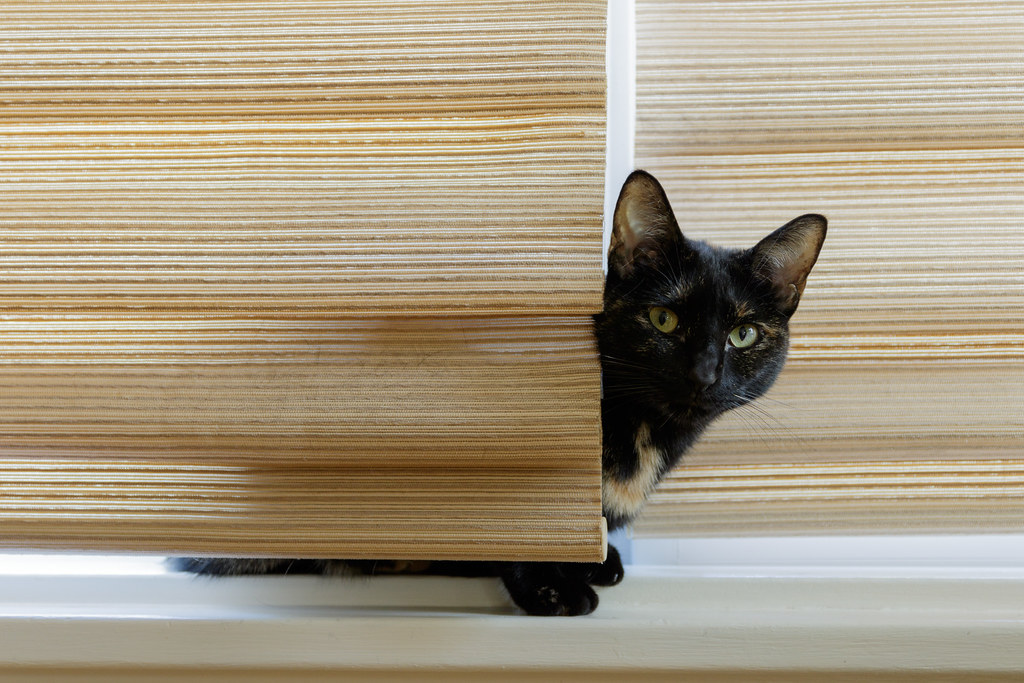 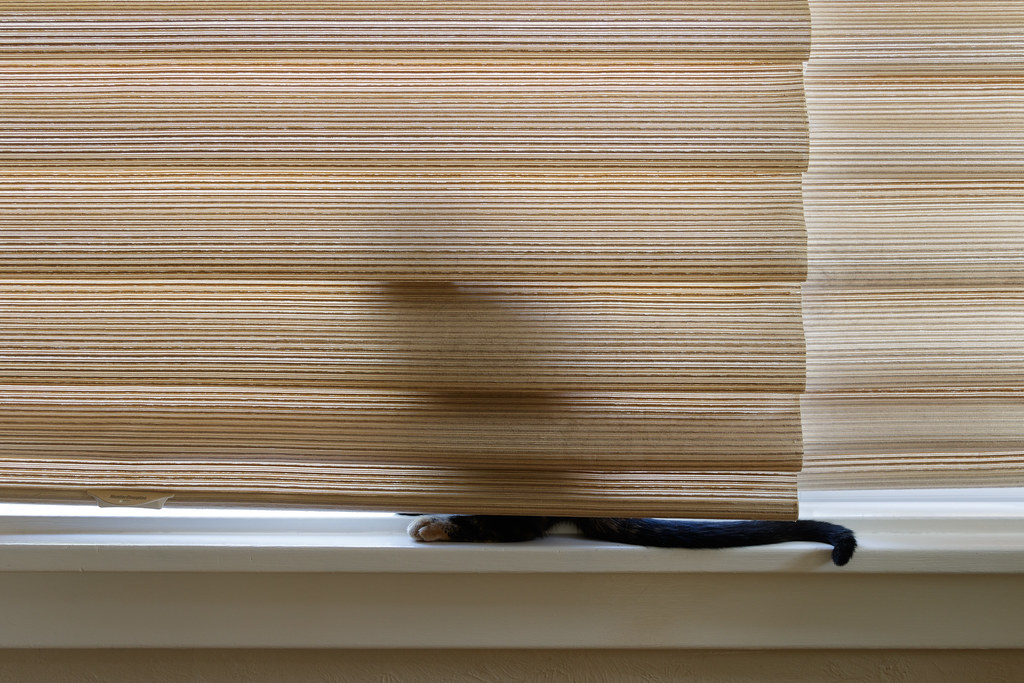 … and some lenses, and some accessories. I had been looking for a mirrorless camera to replace both my Canon EOS M and to replace my non-wildlife shooting for my Canon 7D Mark II. I had actually pre-ordered the full-frame Sony A7R II a year and a half ago but chickened out before it shipped, as it was going to be quite expensive and there weren’t any thorough reviews. In hindsight I still don’t know if it was the right decision or not, as while Sony has continued to bring out some excellent full frame lenses, they don’t have a small walk-around zoom that I like, which was one of the primary lenses I was looking for. Amazing sensor in that camera, though.

I started looking in earnest again this fall when a handful of contenders came out and eventually settled on two, the Olympus E-M1 II and the Sony A6500. I set a decision deadline of late February or early March, as I knew it would take me a while to learn either camera well enough before some hiking trips I want to take in the spring, and push came to shove on Saturday as Sony had some sales that were ending.

The decision went down to the wire as I think I could be happy with either system, but ultimately I went with the Sony as for the setup I wanted, it would be smaller and lighter yet with a larger sensor. And it had the 24mm f/1.8 prime I had fallen in love with years ago, to the point that I had considered getting a Sony when it was released, but it didn’t have image stabilization and neither did Sony’s crop sensor bodies (until the A6500 was announced that is).

There’s no question I’ll miss the weather sealing of the Olympus, and as someone who likes to shoot in the rain and wants to do more tide pool shooting, I’ll miss it frequently. As a big fan of image stabilization I was also strongly tempted by the Olympus because, while both the Sony and Olympus have it in their bodies, the Olympus system is remarkable, particularly when using their new 12-100 zoom. Those two things alone almost swayed me to the Olympus, but it also has a fully articulating screen, which I’d prefer to Sony’s tilting screen, and their touch screen seems more fully implemented as well. I also love how Olympus updates their firmware to add more features. And since this is their only sensor size, all of their lenses are designed for this camera. 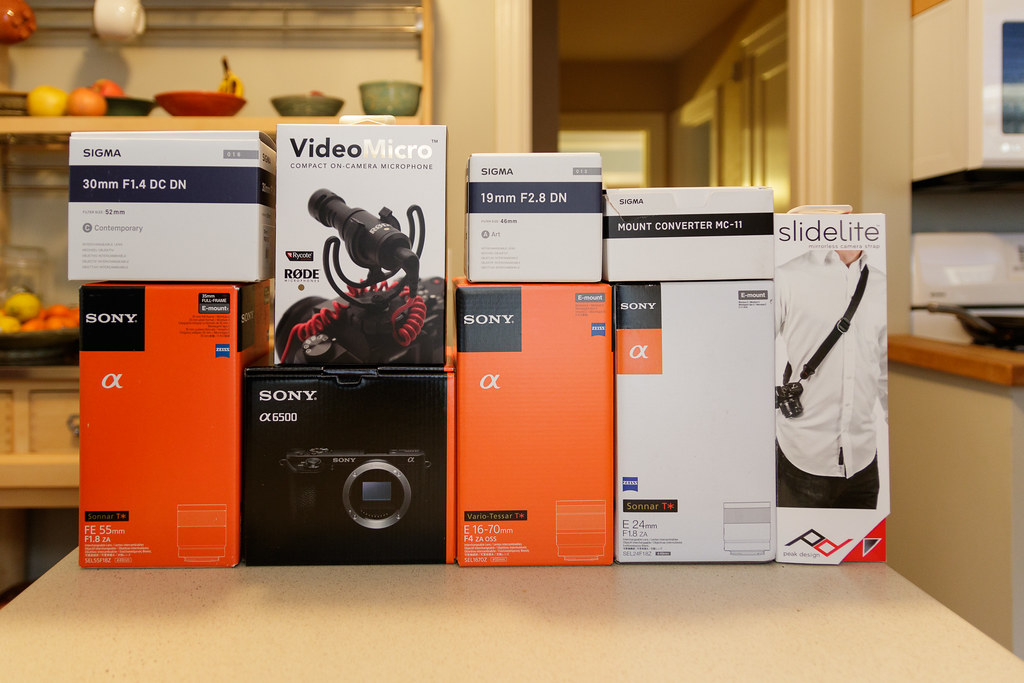 I’m nervous that Sony is putting all their effort in their full frame system and I was looking at a crop sensor system, as I’ve been frustrated with Canon doing the same for years, but from what is available now I put together a system I think I’m going to like and that will let me experiment in ways I couldn’t before. So in the end I went with the Sony A6500, I love the size and weight when combined with the 16-70 zoom, which will be my main walk-around zoom and my main hiking lens. I love the sensor, especially since I shoot in a lot of low light. I also picked up the full-frame 55mm f/1.8, a lens I’ve loved since it came out, as they had a great special on it and if I do add a full-frame camera down the road, it will work well on that as well (with a different field of view).

I also picked up a couple of inexpensive Sigma primes, a 19mm f/2.8 and a 30mm f/1.4, and am looking forward to playing with primes now that I have stabilization in the body. I expect I’ll enjoy primes when I’m at home or when I’m hiking and the weather is dry and not windy, but it’s hard to say without trying them, and I was pleased to find some quality lenses that aren’t too expensive and a good balance of performance and portability.

I also picked up a quick release strap since in general I hate straps but there are times I need them, and a microphone as I’m going to start playing around with video. I was going to get a different Rode mic but it is about to be replaced with a version I’d prefer, so I picked up this inexpensive unpowered mic that is also pretty portable and inexpensive, it will be useful while I figure out how much video I want to shoot and should do fine with louder subjects like waterfalls, and then I can add the new powered mic if I’m doing enough video to warrant it down the road.

I bought Sigma’s converter that will let me attach some of my Canon lenses even though they only officially support a subset of their own lenses (my Sigma f/2.8 zoom is sadly not one of them), but even if I only use manual focus I’m looking forward to doing macros with my old macro lens, and seeing if manual focus is doable for shooting some limited wildlife movies (especially diving ducks).

And of course I picked up that lovely Sony Zeiss 24mm f/1.8 that I had fallen in love with a few years back, sight unseen. I used it for this quick shot of Sam in our dining room, orange on orange, I still don’t know how to use the camera since it’s very different from what I’m used to, but I wanted a quick test to make sure it was working. Normally I’d stop down a bit for a shot like this so more of him would be in focus, but since I was playing around I shot it wide open.